The Soviet NSV Heavy Machine Gun was introduced in 1971 and still sees constant action around the globe today. 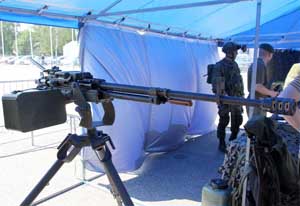 For a time, the NSV multi-purpose heavy machine gun was the standard heavy machine gun of Soviet Army forces. The system was adopted in 1971 to specifically replace the long-running DShK/DShKM series which debuted just prior to World War 2 (1939-1945) in 1938. Despite adopting the newer design, the breakup of the Soviet Union during the late 1980s/early 1990s meant that the NSV production facilities (and applicable license rights) fell within Kazakhstan territory which essentially signaled the end for the NSV in Russian Army service. Instead, the Russian Army selected the Kord 12.7mm series in its place. Regardless, the NSV continues in Russian Army service (though being replaced with the newer Kord line when possible) while license production of the NVS has been undertaken in Bulgaria, India, Poland, Vietnam and the former Yugoslavia (now Serbia) - ensuring that it remain in circulation for some time to come.

The NSV is chambered for the large 12.7x108mm cartridge, a cartridge capable of piercing light armor protection and literally annihilating a human target to unidentifiable pieces. Such a weapon requires specific tolerances and this, in turn, adds bulk and weight - restricting the weapon to a largely defensive role when mounted onto a heavy duty tripod. If intended for offense - say fixed atop a trainable mounting on a vehicle, watercraft or helicopter as a vehicle gun, the weapon is given more flexibility and mobility. The gun unit alone weighs a hefty 55lb with a 50-round belt adding 25lb. The tripod assembly tips the scales at 90lb which, all told, the complete system can reach weights of 170lb.

The NSV relies on a tried and true gas-operated action in which the arrangement taps gasses of the fired cartridge and channels this into a gas cylinder under the barrel. This pressure, in turn, ingeniously drives the action held within at the receiver, ejecting a spent shell casing while injecting a fresh cartridge. Basically, the fired shot provides the necessary movement and forces required of the successive shot. The weapon is therefore restricted to full-automatic fire meaning that a squeeze of the trigger will result in a consistent intake of ammunition (and firing of bullets from the muzzle) so long as ammunition supplies allow and the trigger remains held down. The weapon is given a rate-of-fire between 700 and 800 rounds per minute which, as an air-cooled weapon, the operator need be aware of barrel overheating. Muzzle velocity is a functional 2,770 feet per second which provides the necessary penetration at range - effective range being approximately 6,500 feet against ground targets (such as an enemy vehicle). The weapon can engage both ground and aerial targets - range against aerial targets limited to about 5,000 feet. For anti-aircraft defense, the weapon can be mounted onto vehicles (such as a tank's turret roof) or on a tripod for a more portable, infantry-level defensive product.

The weapon takes on a conventional appearance with its oversized receiver. Ammunition is fed via 50-round belt from a hardened case affixed to the right side of the receiver. Spent casings a ejected at the left of the receiver. The barrel is unfluted as well as unjacketed though capped by a massive slotted muzzle brake to help content with some of the violent recoil forces at play. The gas cylinder is fitted under the barrel in a rather traditional way. Sighting is through an iron arrangement though the weapon has been coupled to various optical arrangements, particularly when in the anti-aircraft role - though this is largely dependent on the national army in question.

Beyond its use in the Russian/Soviet Army, the weapon has also seen acceptance within the inventories of Afghanistan, Armenia, Azerbaijan, Bosnia and Herzegovina, Bulgaria, Croatia, Finland (as the "12.7 ltkk 96"), Georgia, India (produced by the Ordnance Factory at Tiruchirappalli), Iraq, Kazakhstan, Kuwait, Macedonia, Mauritius, Mongolia, Montenegro, Poland (as the "WKM-B" though in 0.50 BMG form), Serbia (as the "M87 NSVT", a vehicle gun by Zastava Arms), Slovenia and Vietnam.

Such a reach has meant that the weapon has gone on to see consistent frontline service in several high-profile wars and regional conflicts including the 1980s Soviet-Afghan War, 1991 Gulf War and the 2001 and 2003 US-led invasions spawning Operation Enduring Freedom and Operation Iraqi Freedom.
Advertisements 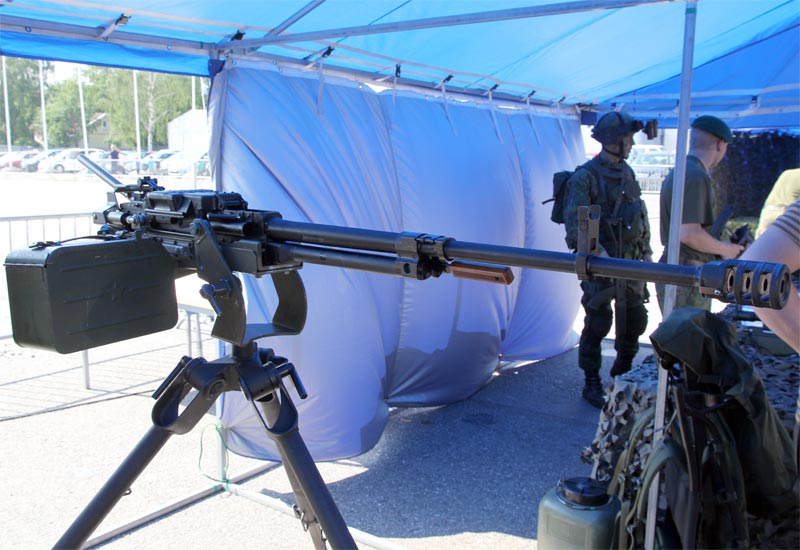 Image released to the Public Domain by Wikipedia user MKFI.