The lightweight M1 Carbine proved a reliable and robust American firearm during World War 2 and beyond. 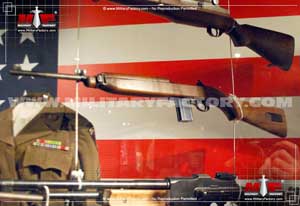 The American arms industry reached all new heights with its commitment in World War 2. Much of the existing stock of guns were primarily left over from the previous world war so initiatives were underway to provide the American infantryman with all new solutions. While perhaps the most famous initiative became the M1 Garand self-loading automatic service rifle, the smaller, lighter M1 Carbine certainly deserves its fair share of credit for helping to "win the war" for the allies. The weapon would go on to serve with all manner of units including the famous American airborne soldier of World War 2. Veterans would compliment the rifle considerably - marking it as a very fine, easy to fire and lightweight weapon. The carbine was produced in 6,500,000 examples, topping that of even the fine M1 Garand series and making its mark as the most-produced American small arm of World War 2. The M1 Carbine served with US forces until 1973.

In 1938, the US Army delivered a request to the Ordnance Department for a lightweight select-fire automatic service rifle chambered for a .30 caliber pistol round to arm various first- and second-line units with a more capable weapon beyond service rifles and pistols. Among these units were machine gun and mortar teams whose cargo was dominated by heavy equipment. These personnel would need a sufficient weapon to which arm themselves with in the event their positions were threatened. While the M1 Garand was an excellent service rifle in its own right, it proved too cumbersome to manage for such overburdened units. The new weapon would also be called to serve rear units such as logistics personnel whose secondary role would be fighting. The initial proposal was not finalized until 1940 to which no fewer than 25 concerns were reached. Winchester was charged with designing the new cartridge. Since the cartridge had yet to be developed, design of the rifle itself was slowed somewhat at the outset.

During this time, a pair of gunsmiths at Winchester were privately developing an automatic weapon for game hunting (in a different caliber) and it was this design that was entered by a Winchester manager (Edwin Pugsley) into the 1941 US Army challenge. The weapon was appropriately redesigned to the requested .30 caliber ammunition while the US Army had since dropped its selective-fire requirement. The weapon stood against 11 other submissions of which only a few made the final cut after May trials. Final trials were held in September of that year with the Winchester design being selected as the winner. In December of 1941, the Empire of Japan attacked the US Navy in Pearl Harbor, Hawaii, officially bringing America into World War 2. The Winchester rifle was assigned the US Army designation of "US Carbine, Caliber 30, M1" - otherwise known as the "M1 Carbine". The cartridge would, therefore, be designated as the "30 M1 Carbine".

As a "carbine" weapon, the M1 Carbine was neither a full-length service rifle nor a submachine gun. Carbines had been generally used throughout military history by mounted troops or specialist soldier types who required a shortened form of a standard-issue "long gun". The M1 certainly fit this mold considering the units that would be issued this weapon in large numbers though, most notably, the M1 did not emerge from any existing long gun then in service - a rather unique aspect to its storied history.

Overall, the M1 was of a very distinct and highly identifiable profile. The body was of a single, solid piece of wood with an integrated grip region, shoulder stock and forend. The major internal working components were inlaid into the wooden body and made for a very robust, yet lightweight, firearm. The trigger unit was positioned in the usual place and made up of the curved trigger assembly and oblong trigger ring. The straight detachable box magazine was inserted into the bottom of the body just ahead of the trigger unit in a conventional fashion. A charging handle was offset to the right side of the receiver. Iron sights were mounted at the receiver rear as well as over the muzzle for some ranged accuracy though the M1 Carbine was never intended for long range work. The barrel protruded a distance away from the body of the gun, covered over partially by another wood portion, and capped with a small muzzle device. Accessories included a shoulder strap looped at the forend and shoulder stock as well as a magazine pouch typically attached at the right side of the stock. The weapon was originally fed via a 15-round detachable box magazine which provided an excellent ammunition supply for a semi-automatic weapon. Overall length was just over 35 inches with an unloaded weight of 5lbs, 7 ounces. The barrel itself measured some 18 inches long and sported 4 grooves in its design with a right-hand twist pattern. Muzzle velocity of the exiting .30 M1 Carbine cartridge was listed at 1,950 feet per second which gave it acceptable "punch". Rate-of-fire was approximately 850-900 rounds per minute.

The firing operation of the M1 consisted of a semi-automatic design relying on a gas-actuated system and short-stroke piston assembly (the latter designed by ex-convict David "Carbine" Williams). The gas operation drove a slide rearwards, operating the bolt which, in turn, ejected any shell casing in the chamber and stripped a fresh round from the awaiting magazine while also cocking the weapon. A return spring managed the slide to its original position and the weapon was more or less made ready to fire.
Advertisements

The M1 Carbine entered operational service in the middle of 1942. After some use, work began on another variant - the M1A1 (US Carbine, Caliber 30, M1A1) - which brought about use of a folding metal wire stock. This addition was of particular importance for it provided a much more compact and lighter firearm for paratrooper forces already burdened by drop gear and basic supplies. The weapon could be conveniently rested along the body (by way of the aforementioned shoulder sling) and made ready to fire in seconds upon landing, the paratrooper-turned-infantryman. In all, some 5,510,000 M1 Carbines were produced in addition to 150,000 M1A1 models. The M1A1 also went on to see general issue to non-airborne elements within time. The M1A3 was another form though fitting a folding Pantograph stock.

In practice, the M1 Carbine gave a good account of itself though it notably lacked range from its pistol-originated cartridge. The weapon was only realistically effective to about 200 yards which, in the hands of frontline units, limited its tactical usefulness to an extent. After some time, it was requested that a weapon with automatic fire capability be developed and this produced the newer "M2 Carbine" mark of 1945. The M2 was, therefore, nothing more than the M1 revised with selective-fire capability - now allowing for semi-automatic and full-automatic fire actions by way of a selector on the left side of the receiver. To compensate for the voluminous fire of the new weapon, the magazine was appropriately up-sized to 30 rounds. Approximately 570,000 M2 Carbines were produced. M2A2 were refurbished models.

Additional in-the-field service ultimately led to the more specialized M3 Carbine variant (based on the preceding M2). The M3 introduced mounting hardware for infrared scopes for low-light usage. The original iron sights were deleted. Their specialist nature assured that only 2,100 to 3,000 examples of the type were ultimately produced and began service in 1945.

Beyond its operations with American troops during World War 2, the M1 Carbine was also used by British forces in the Malayan Emergency (1948-1960) and by French forces in the in Indochina. British SAS, French Legionnaires, Israeli special forces and Belgium units also made use of the type. The weapon was featured in the Suez Crisis, Cuban Revolution, Cambodian Civil War and the Angolan Civil War as well as other notable regional wars. America retained the M1 Carbine in its inventory through the Korean War (1950-1953) and most of the Vietnam War (1955-1975). Some M1 Carbines were even reconstituted for Germany Army service in the event of capture during World War 2 and these were designated as "Selbstladekarabiner 455(a)" - the "a" signifying their American origins ("Amerika"). Overall, operators were numerous and went on to include Algeria, Austria, Burma, Cambodia, West Germany, Greece, Italy, Laos, Mexico, Netherlands, Norway, South Korea, Taiwan, Thailand, and Uruguay to name a few (see operators list for full disclosure).

Success of the M1 Garand in wartime brought about its availability in the civilian market in the decades following.
Advertisements

Semi-Automatic
One shot per trigger pull; self-loading or auto-loading action aided by internal mechanism; trigger management (and initial cocking) typically required by the operator; subsequent shots are aided by the unlocked / moved bolt. Short-Stroke Piston
Type of gas operation typically found in rifle-type arms; relatively short amount of piston movement with reliance on sudden blow for quick acceleration of said piston; lever connected to the bolt is actuated, taking on the resultant energy, subsequently passing it on to the awaiting bolt. Gas-Operated
Gas-operated system is featured, typically involving a gas cylinder and rear-driven piston directing energy to the bolt component. (Material presented above is for historical and entertainment value and should not be construed as usable for hardware restoration, maintenance, or general operation - always consult official manufacturer sources for such information) 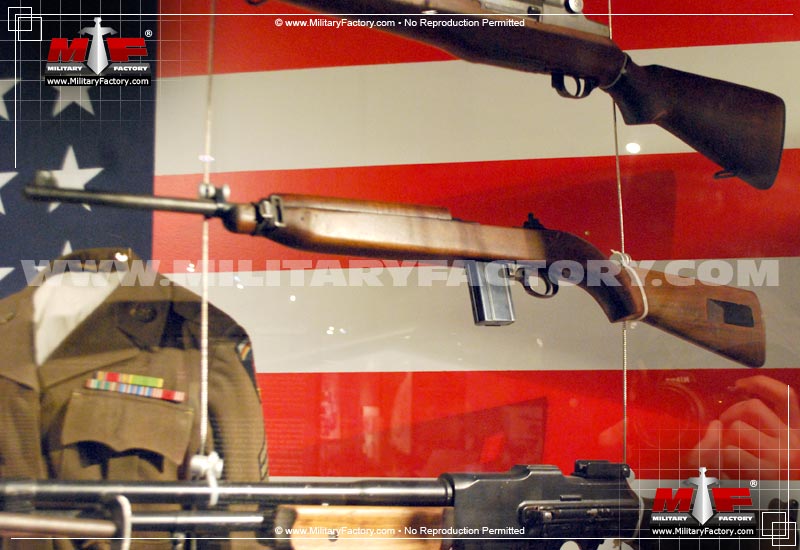 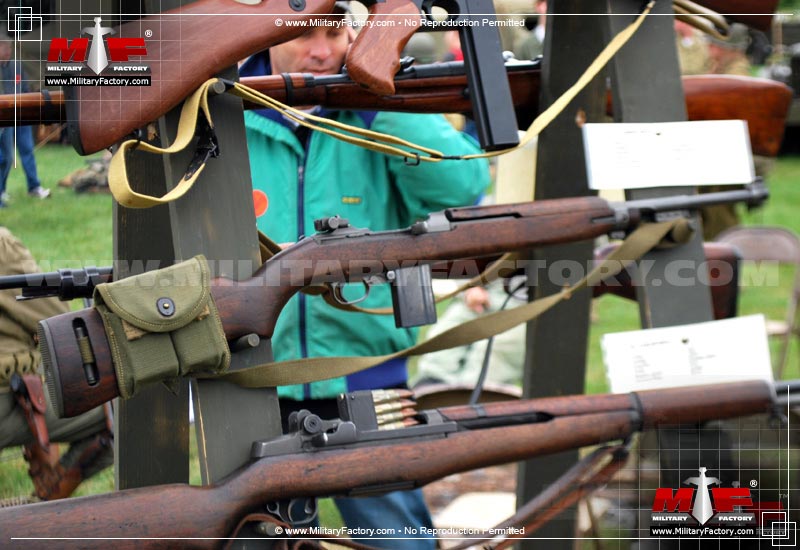 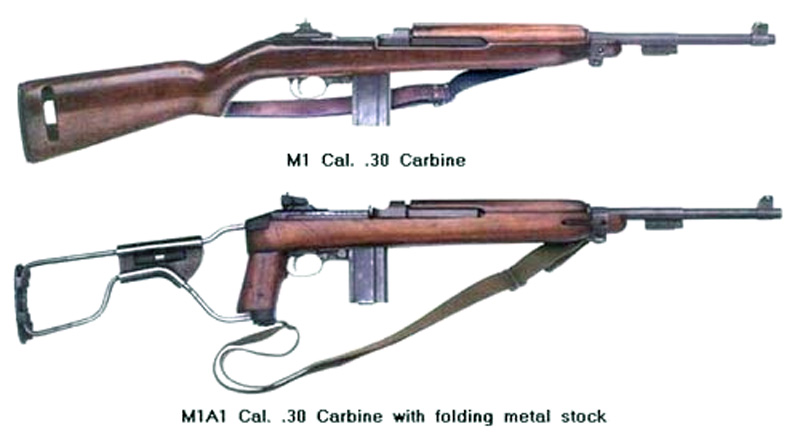 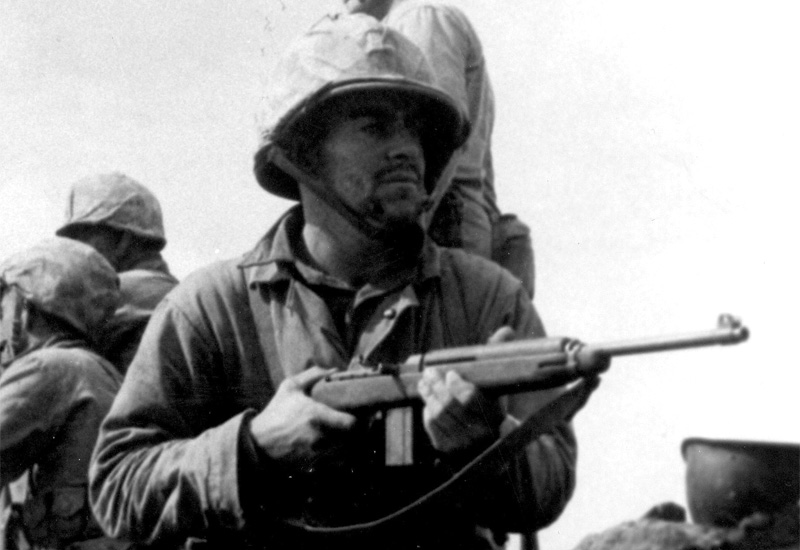 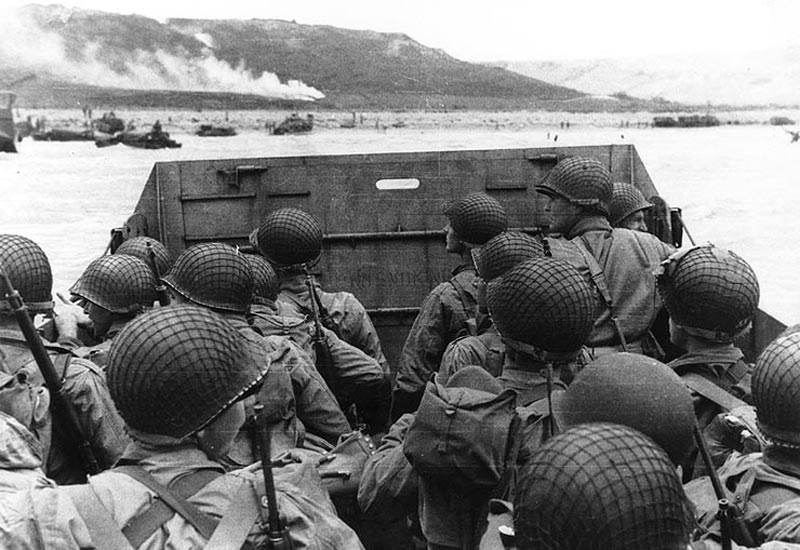 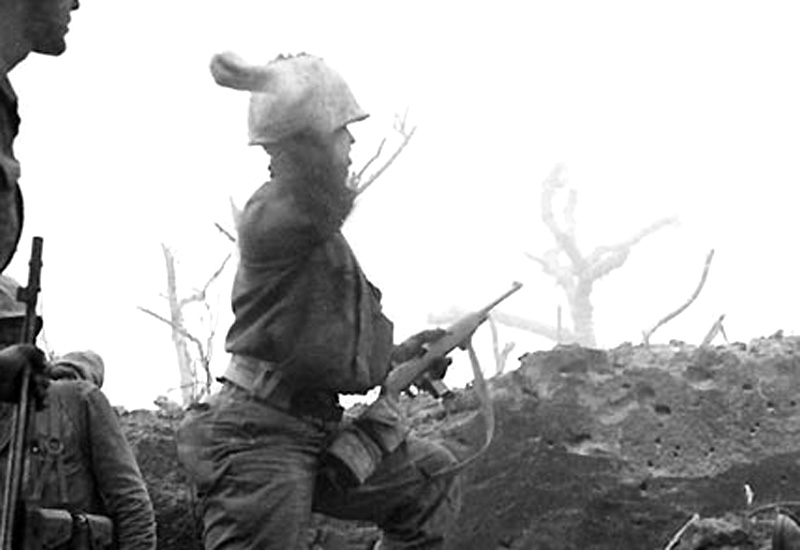 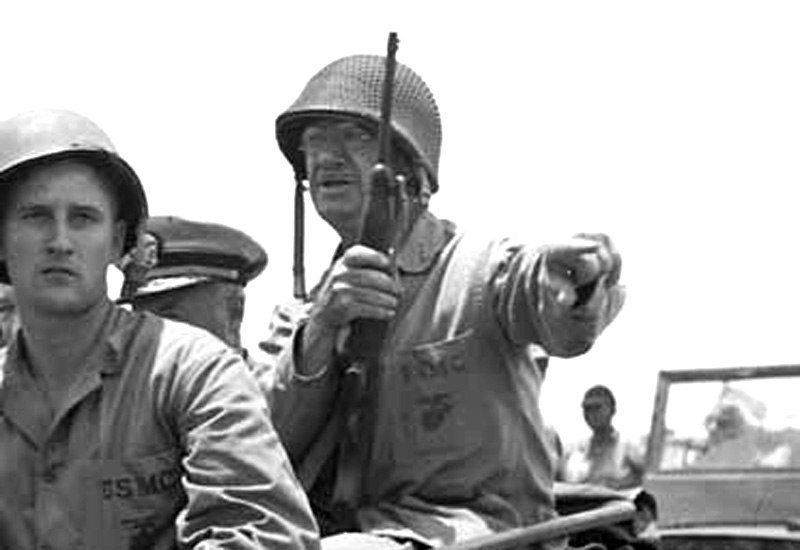 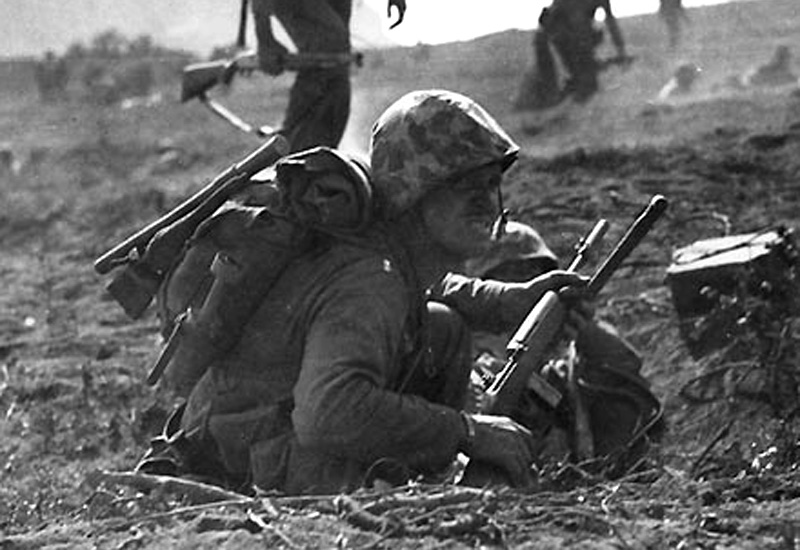 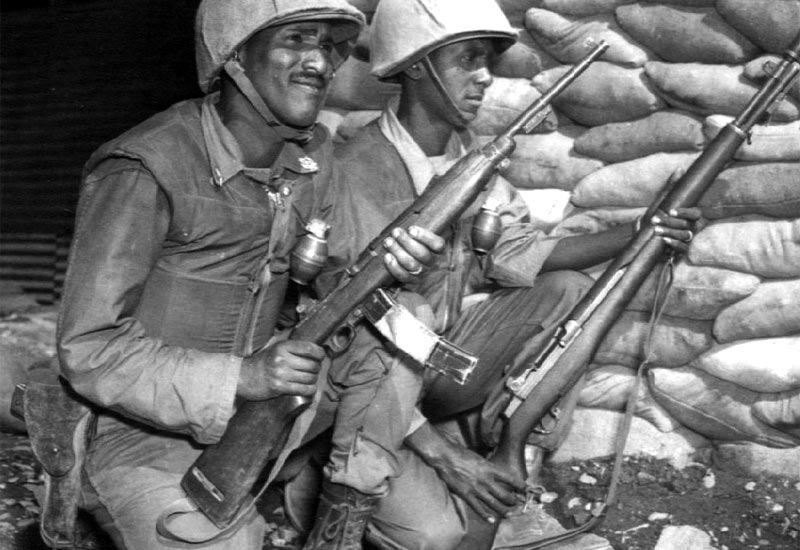 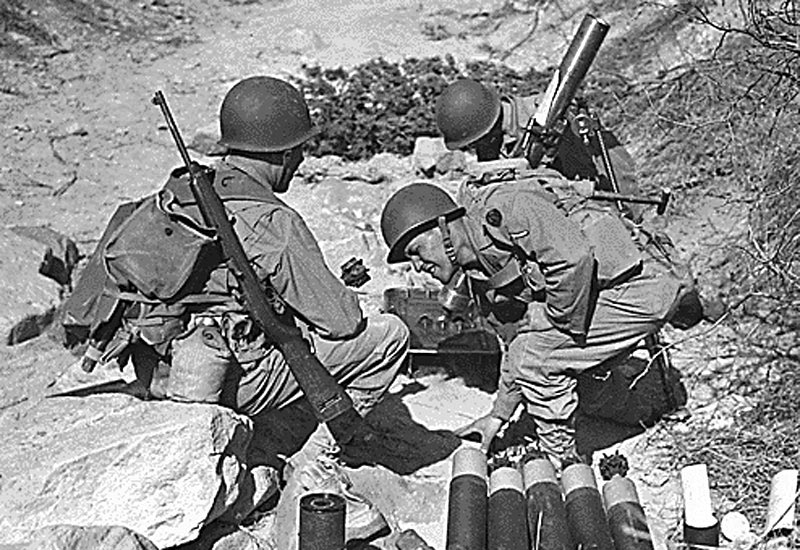