The Chatellerault Model 1929 Light Machine Gun was loosely based on the American Browning BAR action.

Authored By: Staff Writer | Last Edited: 07/23/2016 | Content ©www.MilitaryFactory.com | The following text is exclusive to this site. 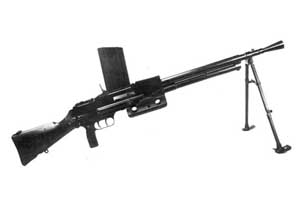 Prior to World War 2, a reliable squad level light machine gun eluded the French military for a considerable number of years. The machine gun had proven itself an utterly destructive weapon of war during World War 1 and a priority lay within the French ranks to stock a capable repeat-fire system to provide the necessary suppression qualities for the rifle squad. Up to this point in its history, the French Army relied on the utterly unreliable 8mm Model 1915 "Chauchat" light machine gun which were also passed on to the arriving American soldier. During the First World War, the Americans went on to introduce their famous Model 1918 Browning Automatic Rifle (BAR) which gave good service with its powerful .30-06 Springfield rifle cartridge and excellent construction while being limited by its 20-round magazine. France procured the BAR in numbers and it was decided to design and develop an indigenous light machine gun based around the Browning action. The weapon would fill the same role as the BAR - portable rifle-caliber firepower at range - and support the French rifle squad through providing voluminous suppression fire. The new light machine gun (LMG) would be complemented by the equally new 7.5x54 French cartridge, this based on the 7.5mm cartridge having been developed for the Swiss Army (and generally based on the successful German 7.92mm).

A design based on the BAR emerged from Lieutenant Colonel Reibel under the banner of the "Manufacture d'Armes de Chatellerault" concern and was designated as the "Model 1924" of 1924 (formally as the "Fusil mitrailleur modele 1924"). However, the Model 1924 design soon showcased several design flaws which were largely related to the action, barrel and cartridge in use. The deficiencies required the weapon to be heavily refined and this included strengthening the internals, utilization of a heavier barrel assembly and a shorter, reduced-power cartridge. The resultant design became the "Model 1924/29" (formally as the "Fusil Mitrailluer modele 1924 modifie 1929"), otherwise casually recognized as the "Chatellerault Model 1929".

Externally, the Model 1929 resembled the British BREN and American BAR gun types. The receiver was rectangular with clean lines throughout, capped at one end by a solid wooden stock (with integrated shock absorber to help retard recoil effects) and at the other by the long-running barrel assembly. Like the BREN, the Model 1929 made use of a top-mounted straight detachable box magazine which housed 25 ready-to-fire 7.5x54mm French cartridges. The use of a top-mounted magazine forced the iron sights to be offset slightly to the left side of the body, this visible when viewing the weapon from above. The ejection port was a large rectangular opening along the right side. The charging handle was also set to the right side of the body and capped with a cylindrical wooden knob for ease of gripping. One of the more unique aspects of the M1929 was its use of a dual-trigger arrangement, both triggers seated within an oblong trigger ring ahead of the straight pistol grip. Single-shot firing was accomplished through use of the forward-most trigger whilst full-automatic fire was managed through the rear-set trigger assembly. Like the BREN and BAR, the Model 1929 was a gas-operated weapon which required utilization of a gas cylinder installed under the barrel. The propellant gasses were tapped towards the muzzle end of the barrel and utilized to cycle the firing action in subsequent shots. The muzzle itself was capped by a conical flash suppressor which proved common for the period. A folding bipod provided forward support to the weapon and was installed just aft of the muzzle and forward of the gas cylinder. The standard firing position was for the operator to lie prone behind his weapon or have the weapon supported on a rise or window sill, the operator then kneeling in the normal fashion.

Model 1929s made use of a 19.7 inch barrel with made up much of the overall 42.6 inch length of the weapon. Rate-of-fire was 500 rounds-per-minute (rpm) with a listed muzzle velocity of 2,700 feet per second being recorded.

With the perfected design, the French government moved to arm their military with the refined Model 1929. As was typical of French industry in the lead-up to World War 2, production of the Model 1929 was slow for the numbers required - primarily limited by economic issues. Within time, the weapon did manage to supplant all outgoing light machine gun designs in service prior and established itself as the standard French Army service light machine gun.

In 1931, a related version of the Model 1929 emerged as the "Model 1931". This variant was fitted with a side-mounted drum containing 150-rounds of ammunition and given a higher rate-of-fire (600rpm) as well as a heavy duty barrel for the sustained fire role with a revised butt and grip. The drum was installed vertically along the left side of the receiver. The butt was decidedly shortened and more utilitarian in its appearance while the pistol grip was noticeably curved forwards. While notably heavier and more awkward to tote, the weapon could serve in a valued defensive role, able to place a large amount of firepower in a small target area with less reloading required. As such, the type served primarily as a defensive weapon and many were stationed across the Maginot Line prior to the German invasion in World War 2. Some were also installed on tanks to serve as anti-infantry/anti-aircraft measures and these were used to good effect in the role. Production of the Model 1931 spanned from 1931 to 1940. In 1934, a revised development was approved for use on aircraft as the "Model 1934/39".

By 1938, Model 1929 and related developments had reached acceptable levels as the situation in Europe worsened - as many as 187,000 examples were in circulation. In September of 1939, Germany and joined a few weeks later - through a loose alliance - the Soviet Union, invaded Poland during the opening month of World War 2.

As the war spread, the French were forced to take notice. Their turn on the grand stage finally arrived on May 10th, 1940 when German officially invaded France. French forces, fielding capable weaponry in comparison to their aggressors, were outmatched by better leadership and tactical decision making on the part of the Germans. As such, despite weapons such as the Model 1929 in their stable, the French government was forced to capitulate after only 1 month and 15 days of intense and bloody fighting. Rather than risk damage to its historical capital, French authorities relinquished ownership of Paris to the inbound German forces - Paris would not see its occupation end until 1944. After the fall of France and the northern and western coasts secured under German control, the German Army took the available stocks of Model 1929s and pressed them into service as the Kpfw MG 331(f). Model 1924s were recognized in the German inventory as Leichte MG 116(f). They were assigned to garrisons along the Atlantic Wall and were further used to bolster the German presence on the Channel Islands - the only British claims occupied by the Germans in the war. The Channel Islands of the British Empire would be under German control until May 9th, 1945.

During its wartime use, the Model 1929 proved a reliable and robust weapon. It was a well-designed and manufactured firearm with a battlefield resilience comparable to the American BAR. In fact, French soldiers preferred their indigenous development over that of the American one. The action and mechanical facilities of the weapon were well-protected against all sorts of battlefield abuse and foreign artifacts and - so long as the weapon was properly maintained and handled - could provide decades of stellar service, which it would go on to do. One of the tactical drawbacks soon discovered of the design was in its lack of a "quick-change" barrel feature to prevent overheating of the assembly and, thusly, generate fractures along its surface (quick-change barrels are now a standard on most machine guns). Free French forces managed to hold on to stocks of Model 1929 Light Machine Guns and utilized them side-by-side with an inventory now being supplied by the Allies - primarily the United States and Great Britain.

The Model 1929 managed an existence well-beyond its expected years of service. After World War 2, the type remained the standard French Army LMG. Immediately following the war, the French Army was embroiled in the conflict of Indochina, a war to last from 1946 to 1954 resulting in a Viet Minh victory. The Model 1929 was still in widespread use with French forces and formed the squad support light machine gun role for its rifle squads. In fact, the weapon was still identified during the American involvement in the Vietnam War (1955-1975) to follow, these presumably left over stocks from the French Army presence earlier.

Other notable actions involving the Model 1929 and its derivatives included the Algerian War (1954-1962), Suez Crisis (1956) and the Cambodian Civil War (1970-1975). For the French Army, however, the Model 1929 was gradually superseded in military service by the arrival of the "AA-52 General Purpose Machine Gun" (GPMG) in 1952.The weapon was similarly chambered for the 7.5x54mm French cartridge though it operated from a lever-delayed blowback system. The AA-52 was eventually chambered for the 7.62x51mm NATO cartridge to conform to NATO standards and saw export to over a dozen countries as a general machine gun, aircraft-mounted machine gun and vehicle-mounted machine gun.

Beyond the French Army, the Polish Army operated the Model 1929, this being the Model 1931 derivative. The type was utilized as a vehicle-mounted weapon aboard French Hotchkiss and Renault light tanks prior to World War 2.
Advertisements

*May not represent an exhuastive list; calibers are model-specific dependent, always consult official manufacturer sources.
**Graphics not to actual size; not all cartridges may be represented visually; graphics intended for general reference only.
Rate-of-Fire
450
rds/min
Muzzle Velocity
2,722 ft/sec
(830 m/sec) 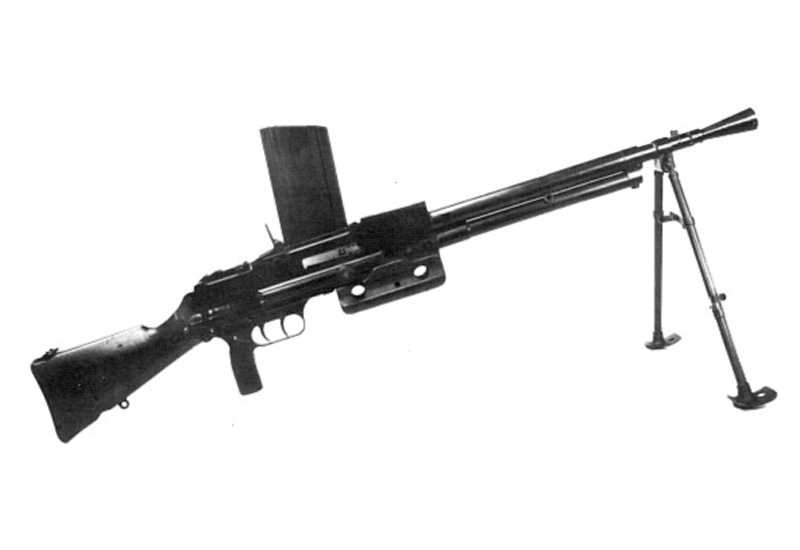