The design team responsible for the CIS Ultimax 100 was headed by American Jim Sullivan.

Authored By: Staff Writer | Last Edited: 08/16/2018 | Content ©www.MilitaryFactory.com | The following text is exclusive to this site. 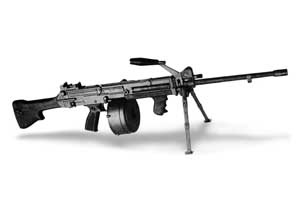 The Ultimax 100 lightweight infantry support weapon was designed in 1977 by American firearms engineer Leroy James Sullivan (Jim Sullivan) whose credits also included the Stoner 63, Ruger Mini-14 and the M16 rifle - all scaled down versions of larger existing weapon systems. Development centered around producing a weapon of high quality that was reliable under battlefield conditions, was portable by a single individual and could bring a good amount of firepower to bear on a target or target area. The resulting weapon system - the Ultimax 100 (or "M100" or "U100") - was introduced into the Singapore Armed Forces in 1982 and has seen operational use elsewhere since. Production was initially handled by the Chartered Industries of Singapore, known collectively as "CIS", and made largely of pressings and stampings with a plastic pistol grip, foregrip and butt for a lighter end-product. In 2000, CIS was acquired by ST Kinetics who now lays claim to the Ultimax 100 line. It is believed that some 80,000 examples have been produced to date with production still ongoing.

The Ultimax 100 is chambered for the 5.56x45mm NATO standard cartridge and can fire from a standard 20- or 30-round STANAG curved magazine or a 100-round Beta C-Mag ammunition drum. The weapon is gas-operated with a rotating bolt action. Weight of the system is approximately 10.5lbs, varying only slightly between variants in the series. The machine gun fields a running length of about 1,030mm and made shorter by having its detachable buttstock removed. The standard barrel length measures in at 508mm (20 inches) while the "short" barrel is just 330mm (13 inches) - either is of the "quick change" type and sports a flash hider and support for grenade launching. The shortened barrel form is optimal for special forces operatives or paratrooper elements where portability is key to equipment. Muzzle velocity is rated at about 3,100 feet per second depending on cartridge utilized - either the M193 or the SS109/M855 series. Sights consist of a fully-adjustable rear aperture tangent leaf sight (windage) coupled with an adjustable front post (windage and elevation) and accuracy is further facilitated by way of a bipod fitted ahead of the forend and a foregrip under the barrel housing. Each barrel retains its own respective front sight meaning that the barrels can be fine-tuned ("zeroed") to the individual weapon. Rate-of-fire is listed between 400 and 600 rounds per minute, a rather low rate when compared to other weapons of this class though due to the use of a patented "constant recoil" system that keeps weapon "jump" to a bare minimum. The cocking handle is fitted to the upper left side of the body near the pistol grip.

The Ultimax 100 has since been developed into five distinct variants, or "marks". The Mark I designation was used to define the preproduction models with quick-change barrels. Mark II forms were given fixed barrel assemblies. Both the Mark I and Mark II featured their carrying handles at the midway point of the receiver. Mark III variants featured quick-change barrels in a standard and short/compact barrel length, the latter for improved portability. The Mark IV was a proposed development for the United States Marine Corps specifically during the Infantry Automatic Rifle Program competition. A revised fire selector was instituted but the USMC elected to go in a different direction. The Mark V became a modernized version of the abandoned Mark IV and revised with a folding buttstock, support for the M16-style STANAG magazine or drum and a Picatinny-style accessories rail system. By this point, the Ultimax 100 has also been modified for firing from vehicle mounts.

The Ultimax 100 is currently in use by the forces of Singapore, Brunei, Croatia, Indonesia, Peru, Philippines, Slovenia and Zimbabwe. The weapon has seen extensive action in campaigns across the former Yugoslavia, Indonesia, Philippines, the Fijian coup, Afghanistan and the Sri Lankan Civil War.

CIS marketed the Ultimax 100 under the claim that it was "...the lightest of all light machine guns designed at the outset for one-man operation."
Advertisements 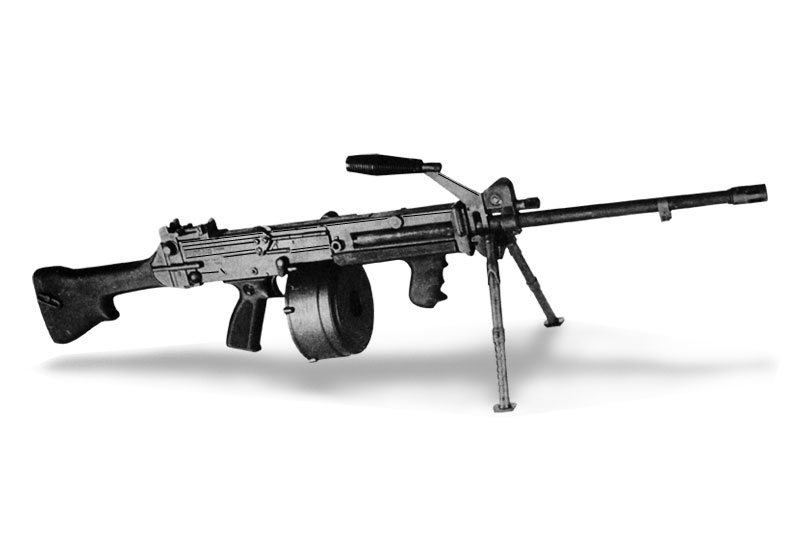