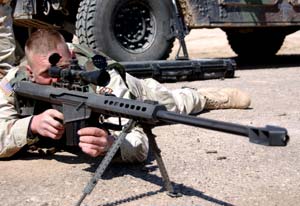 Barrett Model 82, designated as the "M107" in US military service, was introduced in 1982 by the American Barrett Firearms Company and was developed as a scoped, long-range, heavy-caliber anti-material rifle (ironically called the "Light Fifty"). The weapon was chambered to fire the 0.50 inch Browning 12.7x99mm cartridge and the first military sale of the Barrett gun became was 100 M82A1 rifles sold to the Swedish Army in 1989 (as the "Ag 90") making it one of the first modern semi-automatic, large-caliber sniper rifles to be taken into quantitative operational service by any fighting force. In 1990, the US Military purchased 250 of the M82A1 variant for Operation Desert Shield and Operation Desert Storm to which then the US Marine Corps purchased 125 rifles and procurement orders from the US Air Force followed.

The M82 - also known as the SASR ("Special Applications Scoped Rifle") is designed as a multirole weapon system - capable of engaging lightly-armored vehicles, detonating ordnance (such as IEDs) at safe ranges or engaging enemy personnel (with dire results to the human target). The effective range is over 1500 meters with hits having been scored as far away as 2500 meters. API (Armor Piercing, Incendiary) rounds have proven effective against hardened targets such as buildings, trucks, and parked aircraft. The M82 has also been used to engage human targets behind walls though anti-personnel work is not the primary application for the weapon.

The operation of the weapon utilizes a short-recoil principle with a substantial amount of energy supplied from the exiting cartridge to the bolt face. The semi-automatic action extracts and ejects the spent cartridge case and reloads a new round from the 10-round detachable box magazine fitted in a traditional sense under the receiver. The receiver takes on a clean, utilitarian approach and features the charging handled to the right side of the body over the magazine well. The M82 is fitted with iron sights as standard but ships with a standard 10 optical sight. It is normal fired from a prone position supported by the integrated folding bipod assembly and can also be mounted on the US Army M82 tripod. The receiver is made from two parts consisting of an upper and lower section and is stamped from steel sheeting. The barrel is of heavy duty material by design and obviously fluted to help improve heat dissipation while saving weight. The installation is capped with a large double-baffled muzzle brake to help contend with the violent recoil effect. On the earlier models, the muzzle brakes had a cylindrical cross-section while later M82 rifles were equipped with the two-chamber brake of rectangular cross-section. A large shoulder stock is an integral part of the weapon's design and can serve as a carrying handle. A dedicated carrying handle is fitted to the weapon, hinged to fold down over the left hand side.

A variant of the M82 - the M82A1A SASR - is an almost identical production model but completed with a heavy barrel and modified extractor assembly specifically designed to fire the Raufoss Mk 211 Mod 0 cartridge, a type of API ammunition. The M82A2 is a lesser known production model that is arrange in the "bullpup" configuration - the magazine and action set aft of the pistol grip unit. The base M82A1 can be fitted with a carry sling but according to those who have carried it in the field in this manner, the M82 is much too uncomfortable to be across the shoulders due to its excessive length and weight. It is usually carried in a special soft or hard case across the back.

The M82 is used by many specialized military and security units around the world including American Special Forces and regular Army. In practice, its massive .50 caliber cartridge has been known to pierce clean through the entire engine block of a truck. In this fashion, the weapon can also be used to disable key components to armored vehicles (optics, sensors, track systems) including combat tanks. The United States Coast Guard uses the Barrett M82 rifle for countering drug operations into US waters and the New York Police Department is a notable civil service operating the type.
Advertisements

Semi-Automatic
One shot per trigger pull; self-loading or auto-loading action aided by internal mechanism; trigger management (and initial cocking) typically required by the operator; subsequent shots are aided by the unlocked / moved bolt. Rotating Bolt
System utilizes internal mechanism to lock the breech or rear barrel assembly prior to firing. (Material presented above is for historical and entertainment value and should not be construed as usable for hardware restoration, maintenance, or general operation - always consult official manufacturer sources for such information) 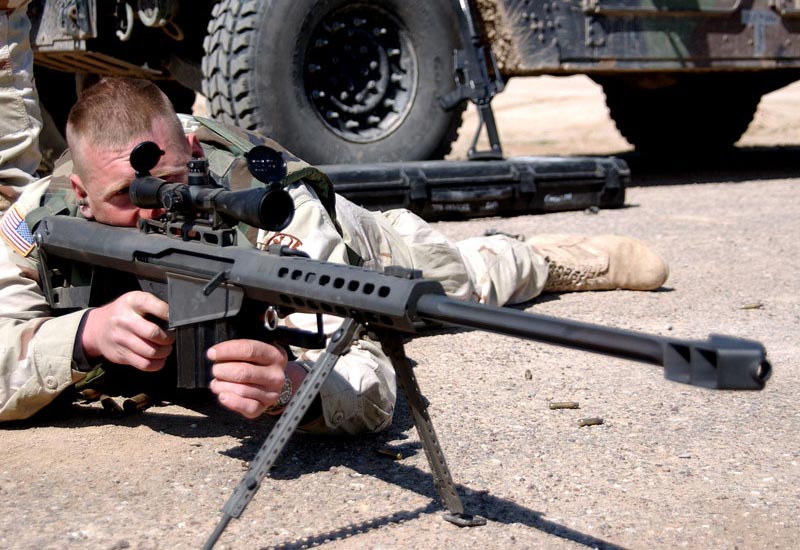 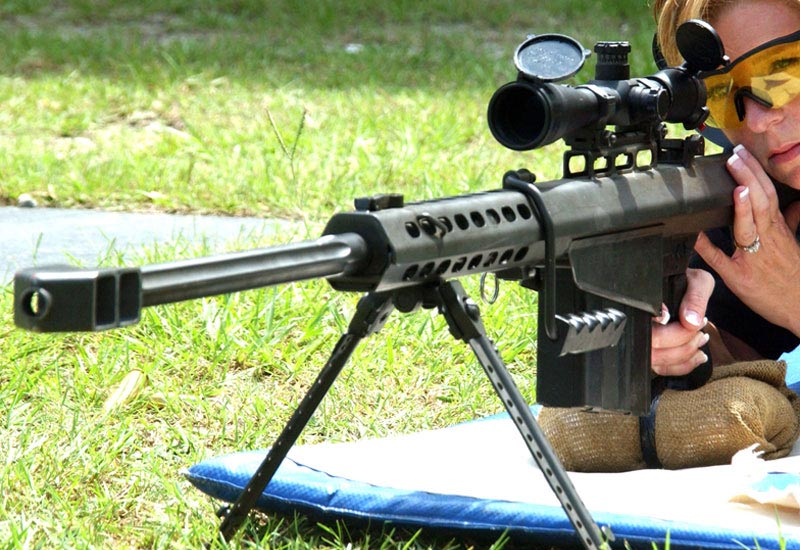 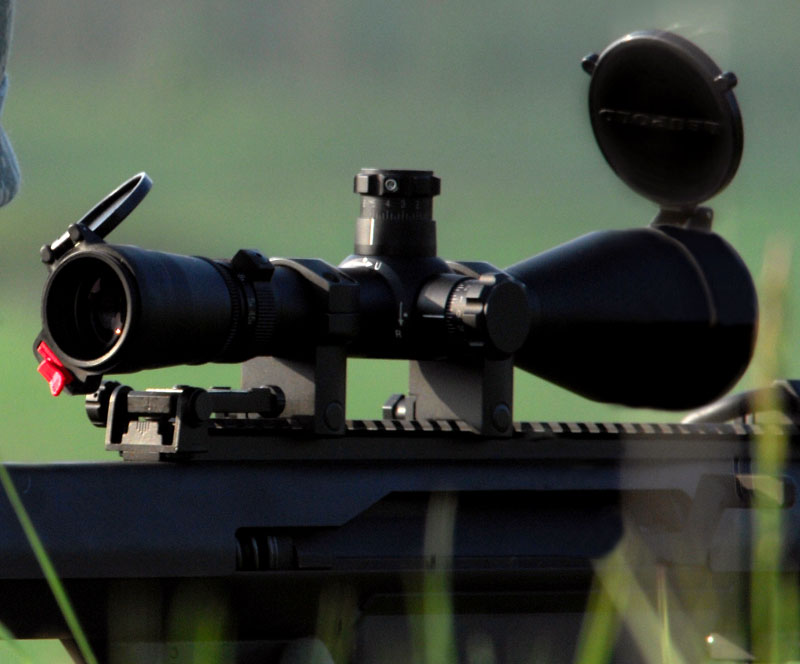 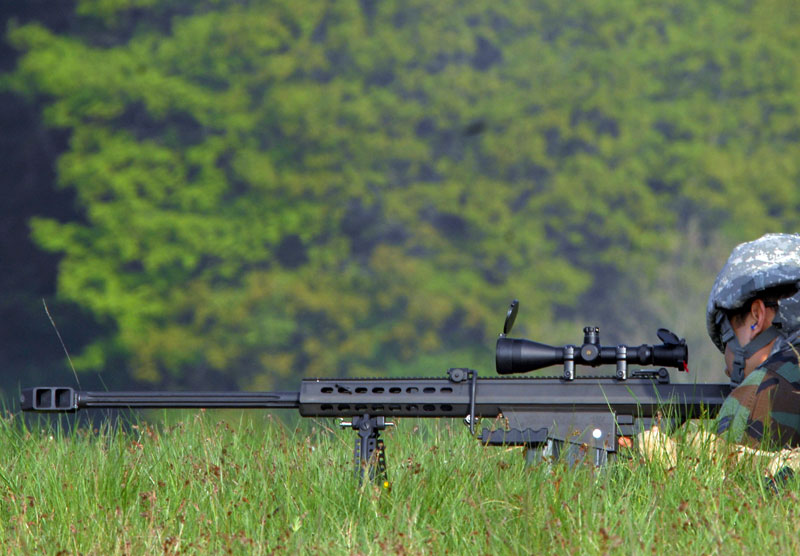 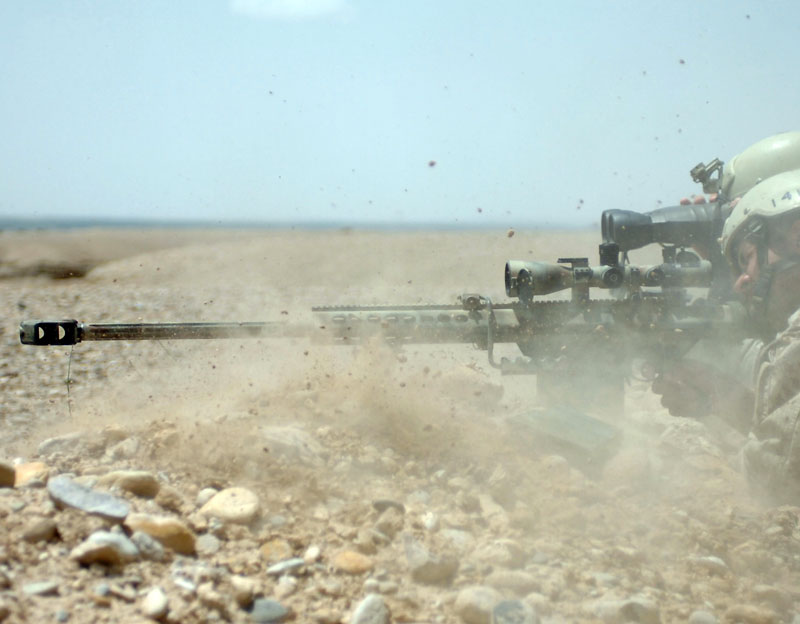