The Heckler & Koch HK416 assault rifle utilizes an improved form of the gas system as found on the HK G36. 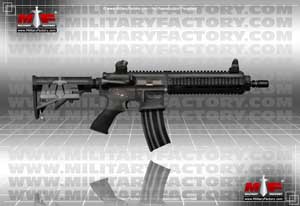 Heckler & Koch unveiled the HK416 automatic rifle family in 2005 as a potential replacement for the M4 family series of carbines. The HK416 was a joint effort by the United States and Germany to produce a more reliable and modern alternative to the M4 Carbine. Development began in 2004 and Delta Force, the special ops group under the US Army banner, was the first to take deliveries of the weapon - doing away with their M4s.

Outwardly, the HK416 looks the part of the M16 assault rifle of its smaller cousin, the M4 Carbine. The pistol grip, trigger group and magazine feed are all contained under the main body of the weapon. The feed system can take on the M16-style STANAG magazine of 20- or -30 rounds as well as a 100-round Beta C-Mag drum). The magazine release catch is located along the upper right rear of the magazine housing while a the fire-selector lever is along along the left side of the lower receiver (fire modes represented as a pictogram). The weapon fires the 5.56x45mm NATO cartridge and the firing action is of gas-operation with a rotating bolt. A rate-of-fire of 700- to 900-rounds per minute is possible (of course this is ammunition type- and barrel length-dependent). The barrel is free-floating and made to fire upwards of 20,000 rounds before needing replacement. In fact, publicized videos show the gunsmiths at Heckler & Koch testing HK416s through some 10,000 rounds of ammunition on full automatic fire without the system ever jamming. The bolt itself stays cool to the touch, allowing the operator to handling the component with bare hands without injury. Sight fixtures include a rear rotary diopter type and a front post. The HK416 is set to take on the MIL-STD-1913 Picatinny modular rail system so it can utilize the same enhancements and accessories as the M16 and M4. A foregrip can be installed ahead of the magazine feed. The stock is collapsible and extendable as needed. The HK416 can fire out of the water with no ill effects to performance.

One of the benefits of the HK416 lies in its new gas system developed from the one used in the Heckler & Koch G36 assault rifle. The HK416 makes use of a short-stroke piston driving a rod that moves the bolt to the rear. This contained action reduces heat build up along the bolt carrier group and keeps gasses from making their way into the internal workings of the gun. The end result is a reliable and long-firing weapon system worthy of military hands. The short-stroke, gas-piston system is contrary to the direct impingement system used in the base M16 rifle. The new system is said to increase the life of the internal workings of the weapon while at the same time cutting down on malfunctions during in-the-field firing.

The HK416 family is made up of sub variants known as the D10RS, D14.5RS, D16.5RS and the D20RS - each differing primarily in the length of their barrel with their respective lengths noted in their designations (10 inches, 14.5 inches, 16.5 inches and 19.9 inches respectively). The D10RS sports a manageable weight of 6.7lb while the D20RS sports a weight of 8.5lb.

The HK417 became a Heckler & Koch development based on the new HK416. It was designed as a larger system and chambered to fire the 7.62x51mm NATO cartridge.

The MR223 and the MR308 became civilian developments of the HK416 and HK417 respectively. Announced in 2007, these two weapons featured some modifications for the more restricted civilian market that included a semi-automatic fire mode among other changes. By 2009, the new Heckler & Koch designations of MR556 and MR762 had been applied to these two civilian models.

Operators of the HK416 series (as of this writing) include France, Germany, Indonesia, Netherlands, Norway, Poland, Slovenia, Turkey and the United States.

In French service, the HK416 has replaced the FAMAS series for special forces. The Germans have added the HK416 to their special forces ranks as well as has Indonesia. The Netherlands Army has replaced their C8 rifles with the HK416 system. Norway inked a deal for 8,200 HK416 rifles in 2007. Polish army and security groups are fielding the weapon as of this writing. The United States military and some select security and police groups have been evaluating the weapon. Turkey will take on license-production of the HK416 under the designation of "Mehmetcik-1".

The HK416 initially carried the Heckler & Koch name of HK M4. Obviously, this did not sit well with the people over at Colt Defense, who were producing the M4 Carbine. A trademark infringement suit was filed and Heckler & Koch later changed the name of their new gun to HK416.

October 2016 - The French Army has named the German-originated Heckler & Koch HK 416 as the official replacement for its standard-issue FAMAS assault rifle line. 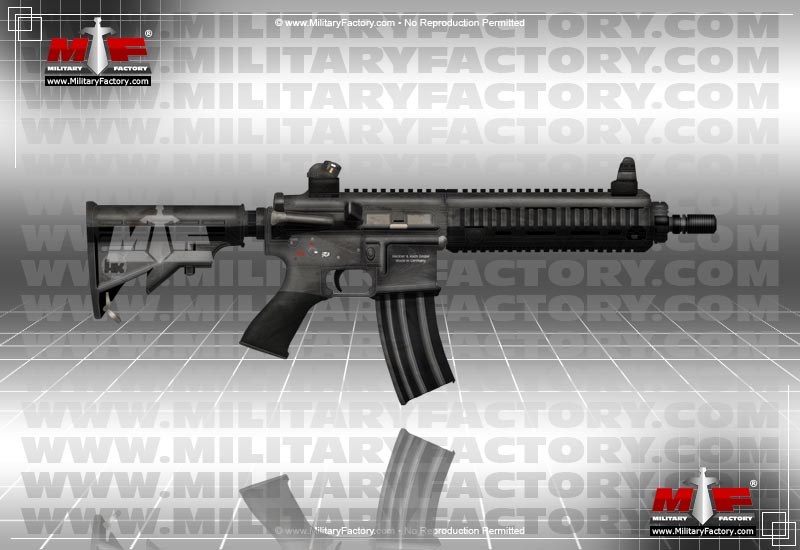