Though borrowing from both the American M16 and the Soviet AK-47, the Daewoo K2 is decidedly South Korean.

Authored By: Staff Writer | Last Edited: 03/12/2020 | Content ©www.MilitaryFactory.com | The following text is exclusive to this site. 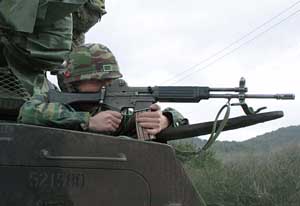 Manufacturing of the K2 series is attributed to S&T Daewoo based in Busan, South Korea. The firm (founded as Daewoo Precision Industries Company Ltd) has since garnered extensive experience in the production of both small arms and automobiles since 1981 (the latter since 1986). While Daewoo itself collapsed, it resurfaced and a large part of its shares were purchased by S&T Holdings in 2006, creating the S&T Daewoo Ltd product brand.

The K2 sports clean lines typical of Daewoo products and bears a resemblance to the American AR-18/Colt M16 automatic rifles. Essentially, the K2 is an M16 in nature but with the proven gas system of the Kalashnikov AK-47 assault rifle. As such, the Korean design does away with the direct impingement system and gas fouling inherent in the Stoner-based M16 line. The new assault rifle offers its users the ability to switch from a telescoping buttstock for ease of concealment and portability or a right-hand folding polymer shoulder stock. The receiver is very "M16-like" and features an angled, ergonomic pistol grip with an oblong, ring-guarded trigger unit. Unlike the M16, however, the K2 does not make use of the integrated carrying handle along the top of the receiver. The charging handle also located along the right side of the gun body and is fixed to the bolt carrier. The forearm is ribbed for a solid forward grip and the gas system (with its long-stroke piston) sits atop the barrel, banded at the front (to the barrel itself) with the aft portion nestled inside of the upper receiver. The firing action remains gas-operated with a rotating bolt and is selective-fire available as single-shot, three-shot burst, or full-automatic firing modes. The three-shot burst function is continuous in that the cycle must fire off all three shots before a new cycle is begun. As such, firing two rounds will not reset the burst function to fire a complete three-round burst with the next squeeze of the trigger. Instead, the burst cycle will fire off the third round and only then reset. Standard iron sights are included and optional optics /aiming sights are supported. The barrel features a muzzle brake and compensator. Construction of the weapon is aluminum alloy forgings making for a tough exterior. Despite its resemblance to the M16 system, the K2's internal parts are not 100% compatible with the American product. The K2 makes use of standard M16 STANAG curved magazines and fires the 5.56x45mm NATO cartridge from a 20- or 30-round magazine.

A Daewoo K201 series 40mm single-shot grenade launcher can be affixed to the underside of the K2 barrel. The K201 is similar in design and scope to the American M203 40mm series launcher.

The K2 assault rifle reports a muzzle velocity of 920 meters per second. Effective range is listed out to 1,804 feet give or take. Maximum range is 7,872 feet. The rifle's running length is 980mm with the barrel measuring in at 465mm. With the folding stock, the length of the K2 diminishes to a more handy 730mm.

Beyond South Korea, the K2 has been accepted by a handful of foreign entities that include Bangladesh, Fiji, Indonesia, Lebanon, Nigeria, Peru and Senegal. Export versions come under the designation of DR-100, DR-200 and DR-300. The DR-100 and DR-200 are chambered for the .223 Remington cartridge whilst the DR-300 makes use of the 7.62x39mm round.

The K2 has already seen extensive combat actions with the South Korean Army in the Afghanistan War of 2001 and the Iraq War of 2003. The weapon was also fielded by Fiji military forces in the Fijian coup d' etat of 2006.

The Daewoo K1/K1A1 is considered by some sources to be a shortened carbine form of the K2 assault rifle. Others refute their direct relationship and consider the K1/K1A1 carbine a wholly different weapon system.
Advertisements 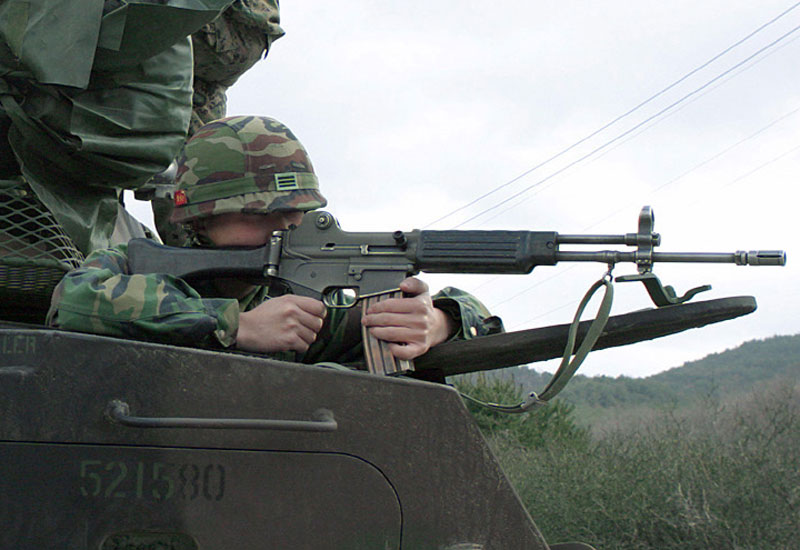 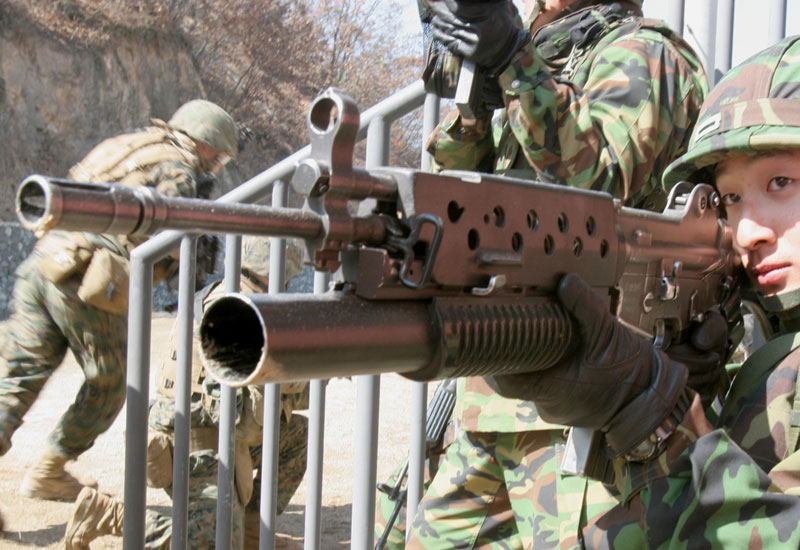 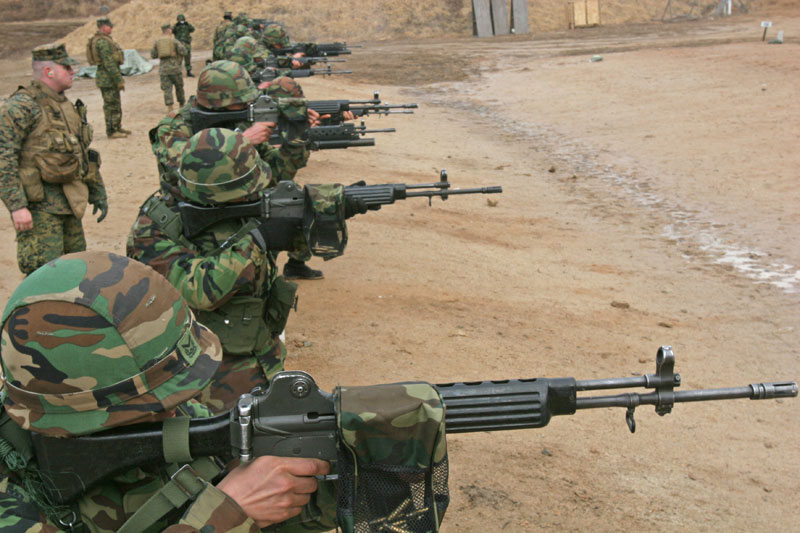 A row of South Korean infantrymen fire off their Daewoo K2 assault rifles; note casing catch fitted to each
4 / 15 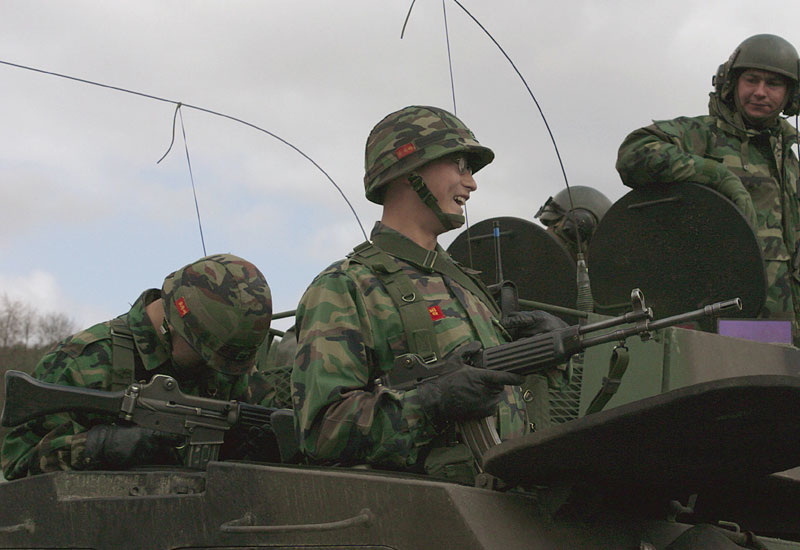 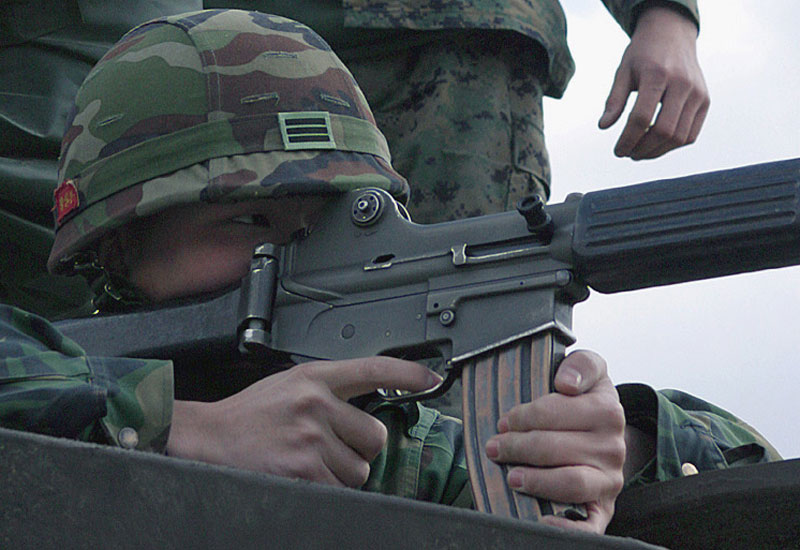 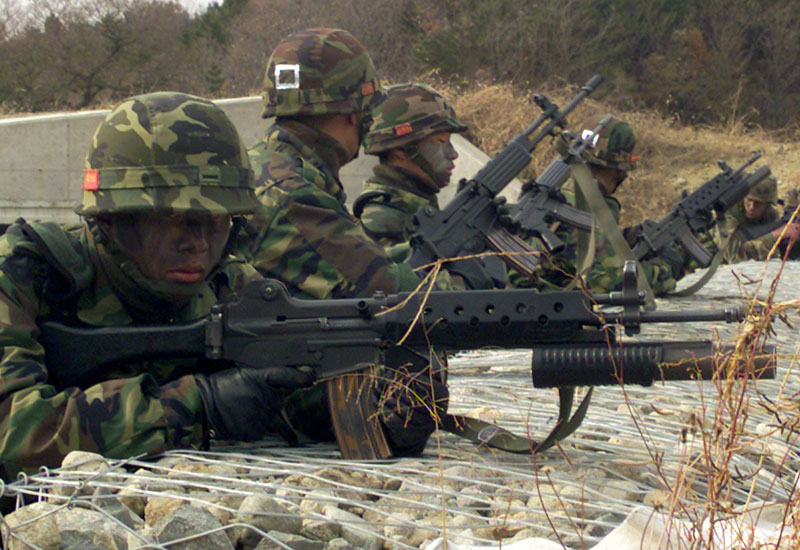 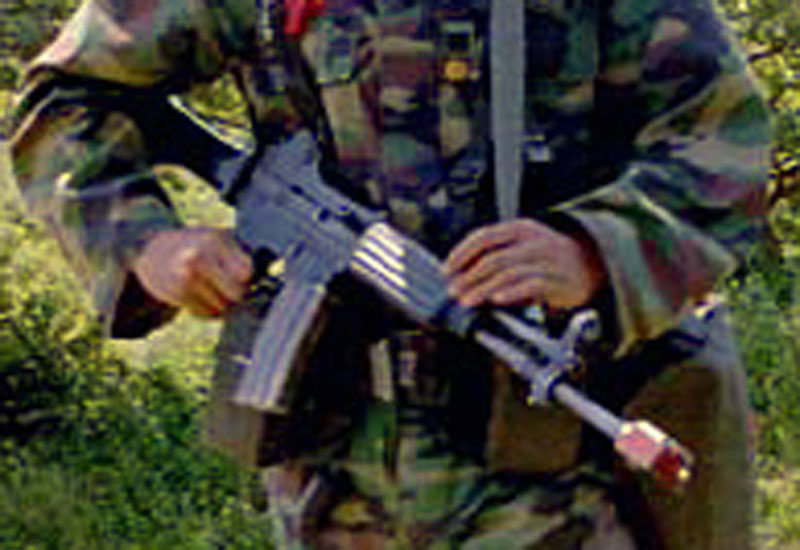 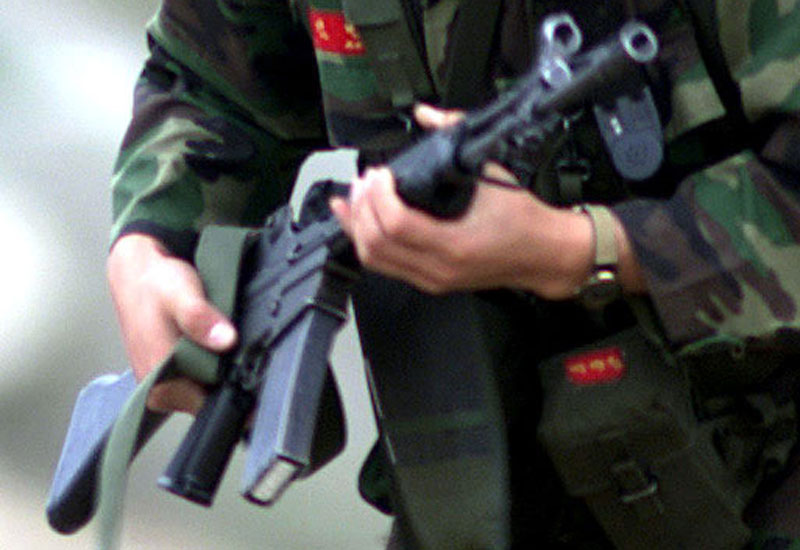 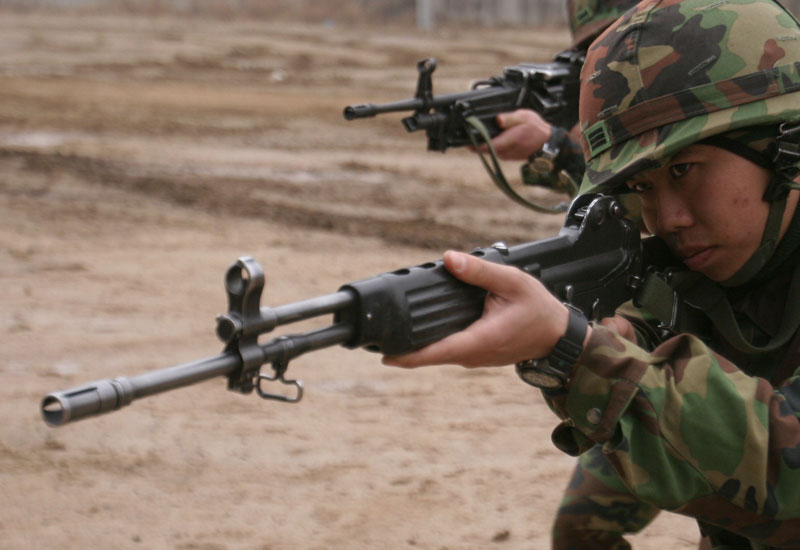 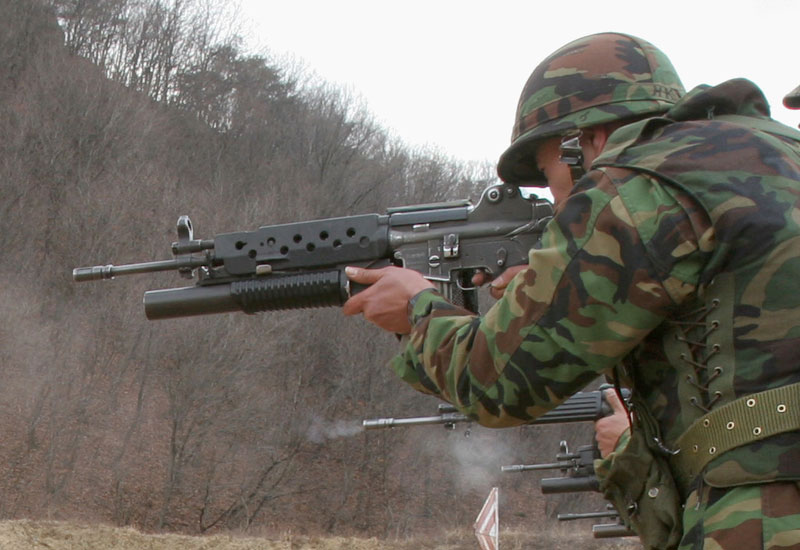 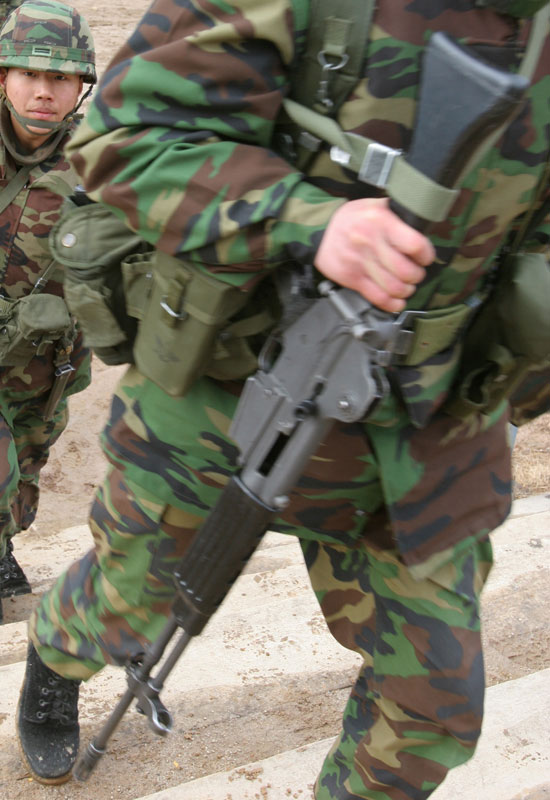 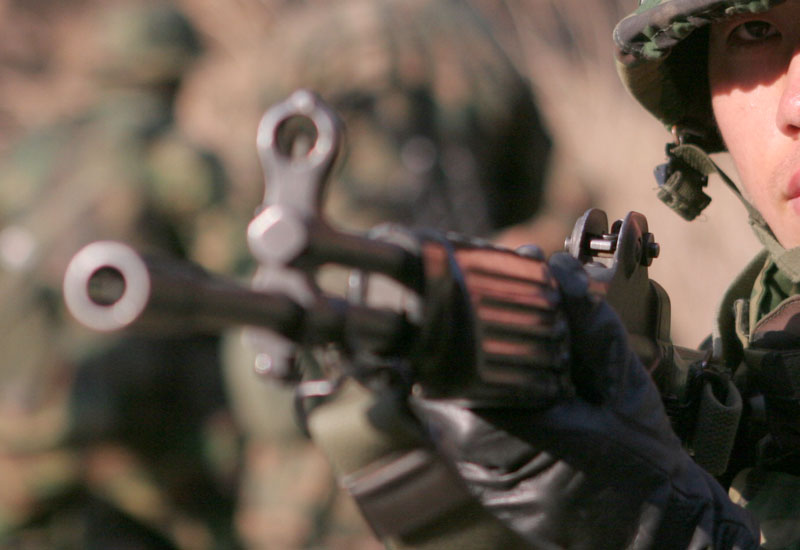 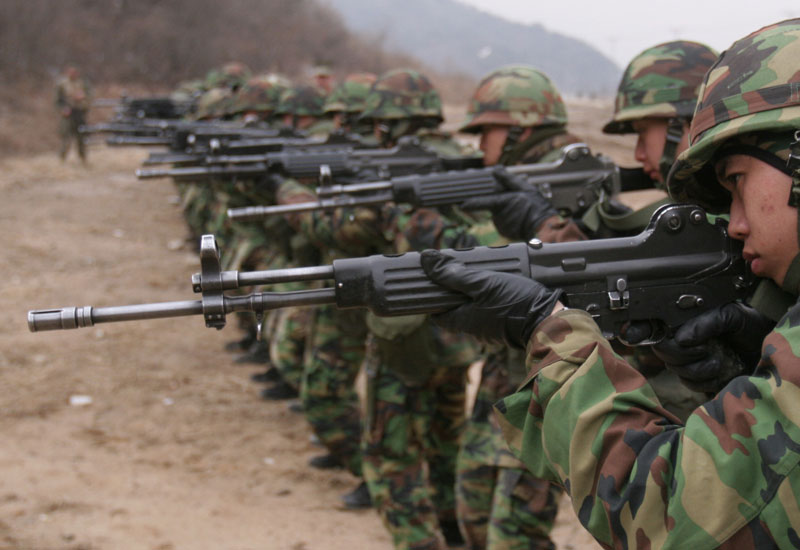 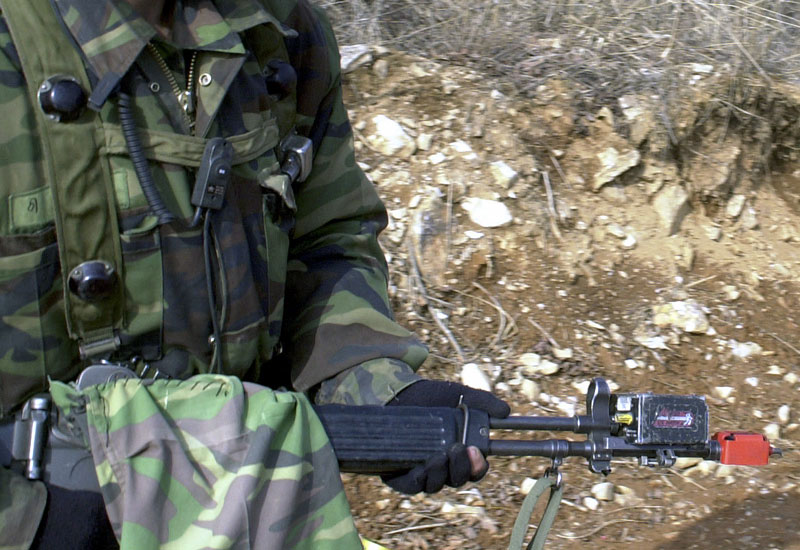 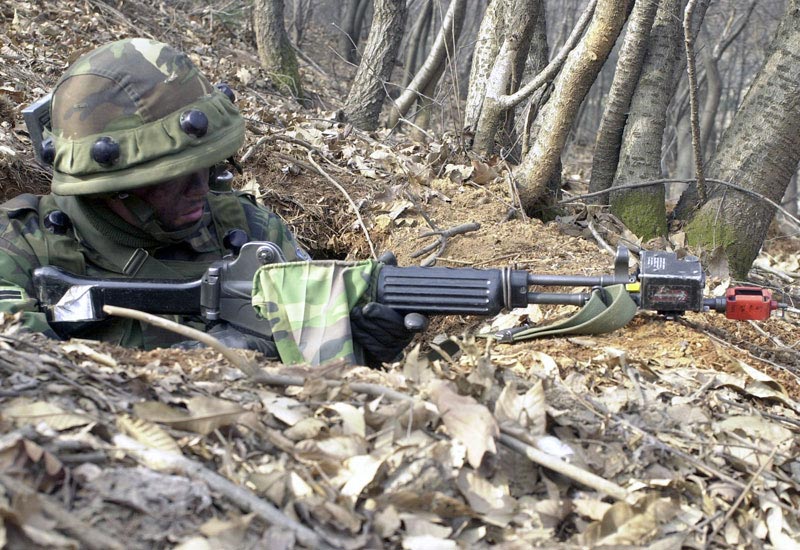