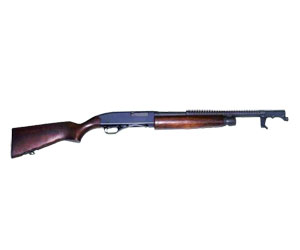 The Winchester 1200 was used for only a short time by the United States military in Vietnam.

The Model 1200 was a capable pump-action, full-size shotgun developed for a variety of markets including civilian, sporting and military. The firearm was developed by through the fabled Winchester concern by engineer T.C. Johnson in 1964. Production then began in 1965 and the United States military became a notable operator of the shotgun from 1968 to 1969 - in time for the weapon to see combat actions in the Vietnam War. At close ranges, shotguns such as the Winchester Model 1200 could be called upon to deliver a devastating salvo of pure firepower suitable for taking down game, dislodging doors or - in the case of military usage - neutralizing enemies (a bayonet fitting is optional). Additionally, such a system could prove useful in crowd control when combined with "non-lethal" rounds. At any rate, the Model 1200 (and the related Model 1300) proved to be an effective and robust shotgun design that went on to find a home through a number of uses.

Externally, the Winchester Model 1200 was a conventional shotgun design featuring a wooden, fixed shoulder stock, under-barrel pump-action slide, multi-shot tubular magazine and full-length barrel. The shotgun sported a listed weight of 6.5lbs and available in 12-, 16- and 20-gauges. The standard barrel was 20-inches in length. The system was fed by way of a spring-loaded tubular magazine that could hold multiple shells (between four and seven depending on the model) and actuated by way of a manual pump-action "sliding" system running under the barrel - moved in a front-to-back motion. Shells were loaded into the tubular magazine through a port along the forward underside of the receiver and, after fired, ejected from a right-hand ejection port along the gun body. The trigger was set to the rear of the receiver and protected within an oblong ring. The shoulder stock was contoured to make up both the primary hand grip as well as a shoulder support. The operator's secondary hand was used to support the weapon at the front by utilizing the ribbed pump-action slide as a foregrip. Sighting was accomplished by way of a bead sight located at the muzzle end. The militarized version of the Model 1200 was - for all intents and purposes - a straight copy of the civilian form, differentiated by the inclusion of a perforated hand guard, bayonet fittings and swiveling slings for use of an optional shoulder strap. The Model 1200 was also completed with the "Winchoke" patented quick-change system - the first to be used in any Winchester production shotgun.

The Model 1200 went on to be produced in a variety of models beyond the base Model 1200, this featuring a four-shell tube magazine. The follow-on Model 1200 Defender increased the internal shell capacity to six while the "Ted Williams Model 1200" was nothing more than a Model 1200 brought to the civilian market through the famed Sears, Roebuck and Company department store powerhouse. The "Model 1200 Hunting" featured a 28-inch length barrel with an integrate choke feature as well as a five-shell magazine.

The Model 1200 was updated in 1983 to become the "Model 1300" which, itself, was produced in a few varied forms under the brand name label of US Repeating Arms Company, a firm founded by former Winchester employees. Leading the way was the base five-shell Model 1300 followed by the seven-shot Model 1300 Defender. The Model 1300 Marine sported electroless nickel-plated barrel and magazine tube assemblies. Production of all Model 1300s ended in 2006 with the bankruptcy filing of the US Repeating Arms Company.

The Model 2200 existed as a Model 1200 with a full stock and marketed in Canada. The Model 120 "Plain Jane" was completed with a birch buttstock and featured a fixed choke system, ultimately marketed throughout various large-scale general department stores.

*May not represent an exhuastive list; calibers are model-specific dependent, always consult official manufacturer sources.
**Graphics not to actual size; not all cartridges may be represented visually; graphics intended for general reference only.