The Armalite AR-18 was a complete redesign of the classic AR-15 automatic rifle and meant for simplified Third World license production methods. 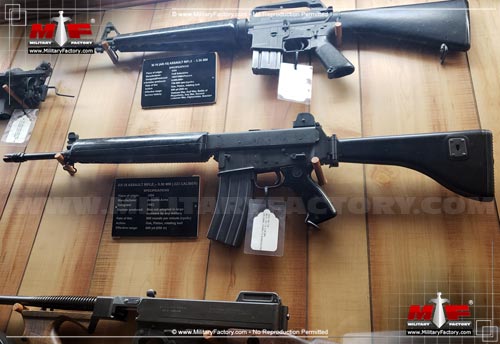 With Eugene Stoner's AR-15 rifle design firmly entrenched as the M16 under production by Colt, his Armalite firm turned to the design and production of a similar yet simplified version of their AR-15 design, moreso to license this version out for production in Third World markets. As the base AR-15 proved to be too difficult to manufacturer without the need for complex production facilities (it relied on aluminum forgings in its construction), the AR-18 was to be the "budget" assault rifle alternative in a market where the 5.56x45mm NATO cartridge was becoming as readily-available as the 7.62x51mm NATO type.

The gas-operated AR-18, looking every bit like its AR-15/M16 cousin, was produced with simplicity in mind utilizing plastic components and steel metal pressings throughout. Along with this cost-cutting approach, general operation of the weapon was kept to minimal expectations resulting in a reliable weapons system that was easy to maintain. The AR-18 was chambered to fire the 5.56x45mm cartridge and came with a foldable plastic butt. Magazines were also offered in 20-, 30- and 40-round counts with the system reporting a cyclic rate of fire of 700-800 rounds-per-minute.

As the United States military had already settled on the M-16 (AR-15) as its primary assault rifle, this left the AR-18 to attempt to find success on the global stage. The rifle would find a market niche through the UK-based Sterling Armaments concern and net its first quantitative sale. From then on, more foreign outlets began producing the system in more localized forms ensuring that the AR-18 would live on with various forces around the world.

Short-Stroke Piston
Type of gas operation typically found in rifle-type arms; relatively short amount of piston movement with reliance on sudden blow for quick acceleration of said piston; lever connected to the bolt is actuated, taking on the resultant energy, subsequently passing it on to the awaiting bolt. Rotating Bolt
System utilizes internal mechanism to lock the breech or rear barrel assembly prior to firing. Gas-Operated
Gas-operated system is featured, typically involving a gas cylinder and rear-driven piston directing energy to the bolt component. (Material presented above is for historical and entertainment value and should not be construed as usable for hardware restoration, maintenance, or general operation - always consult official manufacturer sources for such information)

*May not represent an exhuastive list; calibers are model-specific dependent, always consult official manufacturer sources.
**Graphics not to actual size; not all cartridges may be represented visually; graphics intended for general reference only.
Rate-of-Fire
700
rds/min
Muzzle Velocity
3,250 ft/sec
(991 m/sec) 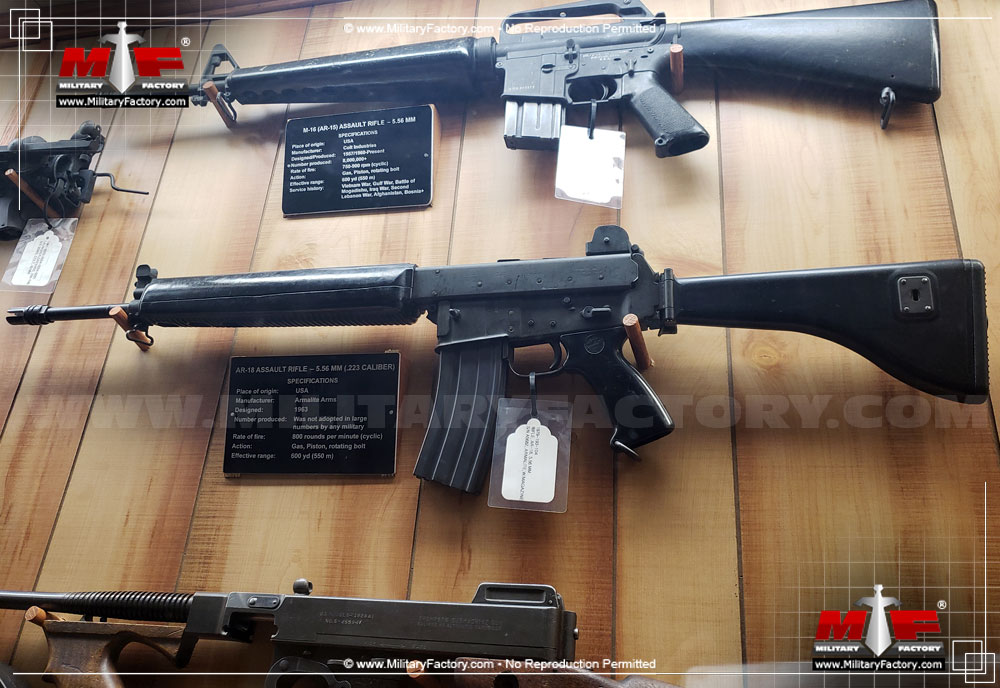 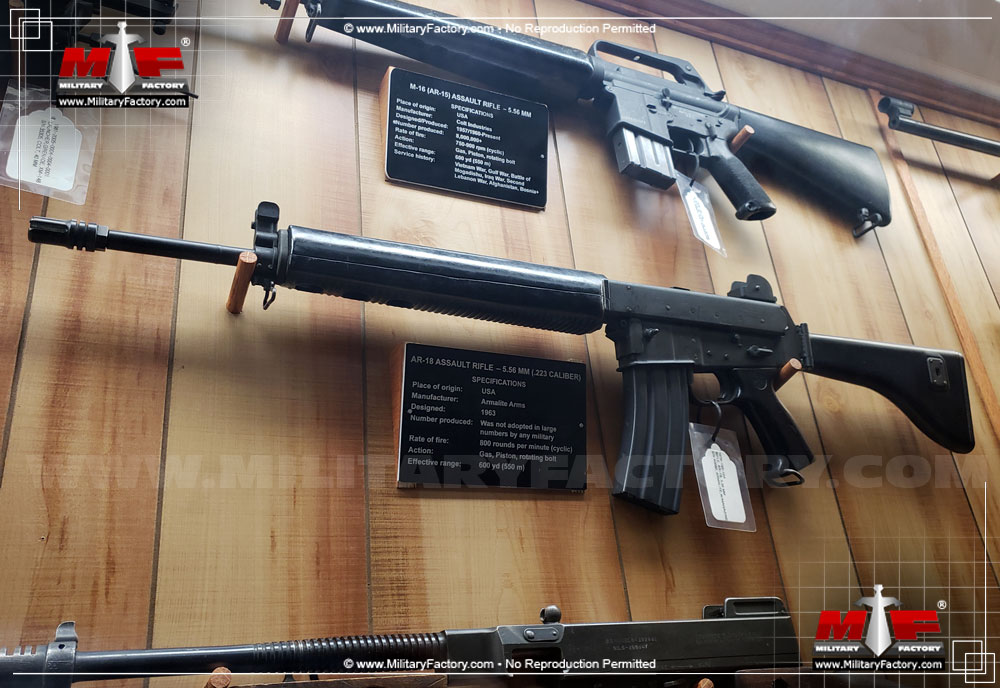 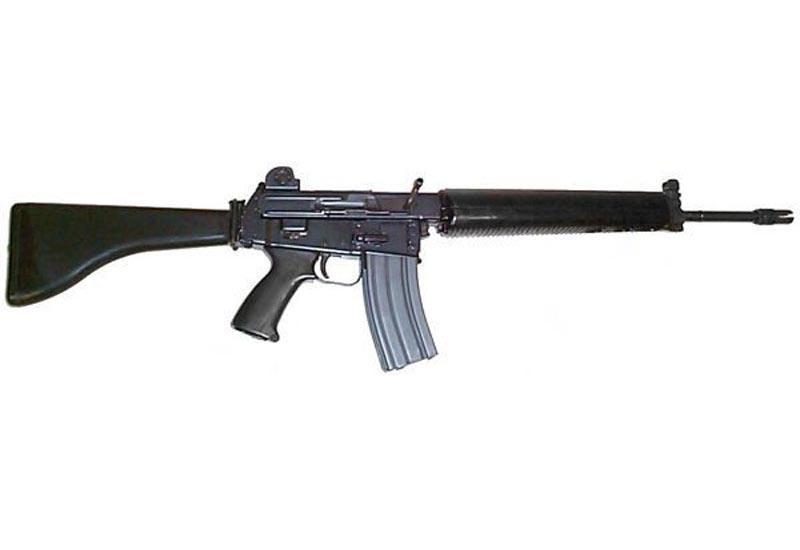 Side profile view of the Armalite AR-18 automatic rifle.
4 / 4 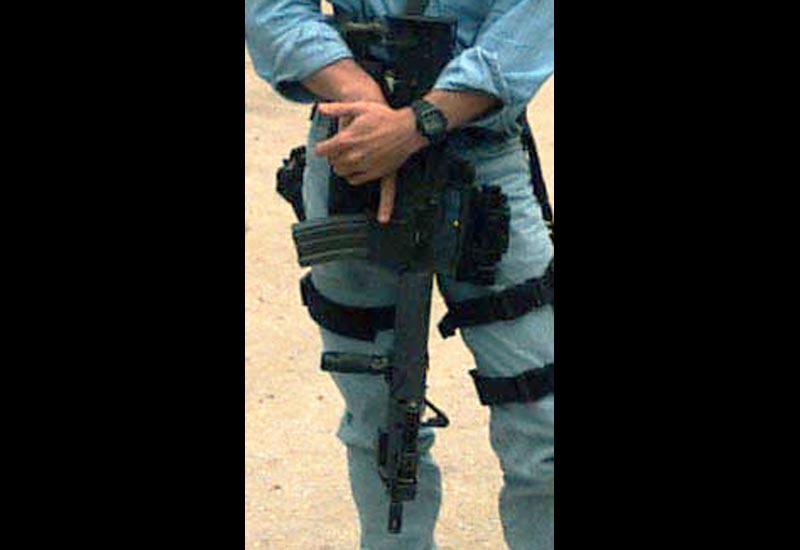