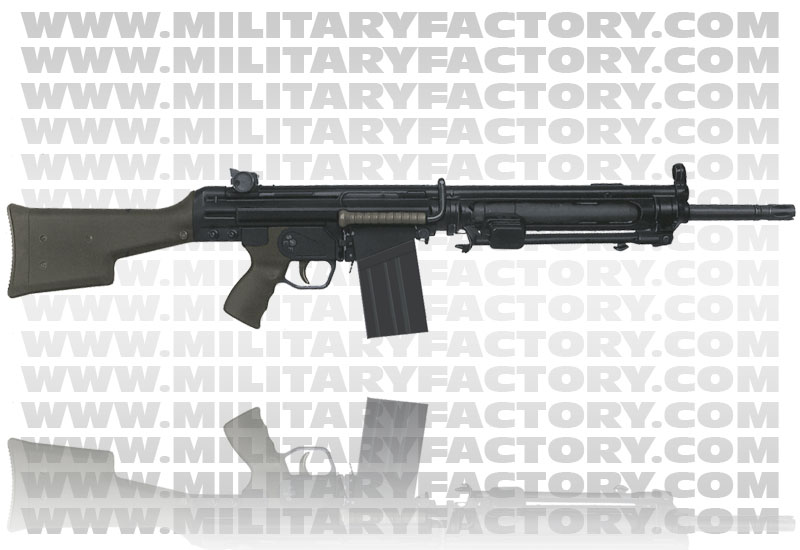 The HK11 was essentially the HK G3 automatic rifle fitted with a heavier barrel for the light support machine gun role.

As with other HK designs, the Heckler & Koch HK11 light support machine gun borrows much of what makes the HK G3 assault rifle a military success. With origins of the HK delayed-blowback system dating back to the closing months of World War 2, the HK 11 was born from the allowance of German rearmament following the post-war years. Previously, German gunsmiths were panning their trade out of countries such as Spain and developed a delayed-blowback system that would come to be featured in the Spanish CETME assault rifle. Armed with that developmental knowledge and wartime design experience, these engineers went on to produce the HK G3 automatic rifle under the Heckler & Koch brand - a brand name known up to then for machine-tool design and production.

The first "true" machine gun produced by the HK firm would become the HK 11 light machine gun system and is said to have proved a local and commercial success. The system was decidedly HK in appearance and operation, featuring an integrated plastic stock, solid trigger group action, a streamlined receiver and an underslung barrel system. The HK11 could be mounted onto a bipod (this fitted either towards the front of the barrel or just behind the magazine feed) for the fire support role or the bipod could be dropped out of the configuration altogether. A heavyweight barrel distinguished the HK 11 machine gun from its G3 assault rifle counterpart and the HK11 was further chambered to fire the 7.62x51mm NATO-standard cartridge from either a 20-round detachable box magazine or the impressive 50-round drum. Early production versions of the HK 11 were noted for their visible "S", "E" and "F" fire mode selector indicators. Later models took on the more visually-associated "bullet" icons to indicate "Safety", "Single Shot" and "Full Automatic" fire modes.

The HK11 maintained a running length of 40.44-inches with the barrel measuring in at 17.71-inches. The barrel sports 4-grooves with a right-hand twist. Unloaded weight is just over 17lbs. The weapon's cyclic rate-of-fire is listed at 800 rounds per minute. Muzzle velocity is 2,625 feet per second.

The HK11 family basically consisted of two major production variants - the HK11A1 and the HK11E. The HK11A1 was nothing more than the magazine-fed version of the HK21A1 machine gun. The feed was designed in such a way to facilitate the switch from belt-feed to magazine-feed within minutes. This allowed the belt-feed mechanism to be replaced by a magazine housing. The HK11E represented an improved form of the HK11E. The HK11E introduced a three-round burst firing more, a longer receiver and a "drum" type sight. Like the HK11A1 before it, the HK11E could switch to and from a magazine- or belt-feed with slight modification from the operator.

Though the HK11 was purchased by Greece (and subsequently license-produced in that country) it is largely believed that some nations on the African continent and in Asia also purchased the light machine gun for their ranks.


20-Round Detachable Box Magazine OR 80-Round Drum

*May not represent an exhuastive list; calibers are model-specific dependent, always consult official manufacturer sources.
**Graphics not to actual size; not all cartridges may be represented visually; graphics intended for general reference only.
Rate-of-Fire
800
rds/min
Muzzle Velocity
2,625 ft/sec
(800 m/sec)

HK11 - Base Series Designation.
HK11A1 - Redesigned butt; could fire from a 30-round detachable box over the standard twenty-round one.
HK11E - Three-round burst fire implemented into trigger mechanism; lengthened barrel casing; redesigned sight; can fire from standard box magazine or be fitted with a 50-round drum instead; can also be belt-fed with some modifications.
EHK11A1 - Greece-production model produced by EBO.