The L7 series of general purpose machine guns is based on the FN MAG system, though with some modifications for British use.

Authored By: Staff Writer | Last Edited: 07/28/2017 | Content ©www.MilitaryFactory.com | The following text is exclusive to this site. 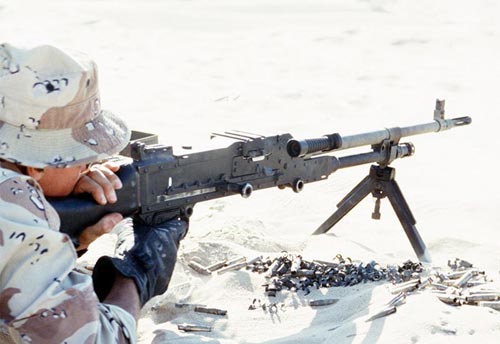 The L7 GPMG (General Purpose Machine Gun) - sometimes called 'Gimpy' or 'Jimpy') was the hugely successful Belgian FN MAG (detailed elsewhere on this site) in British Army service. Largely faithful to the original design, the L7 incorporated only minor changes (this accomplished by the Royal Small Arms Factory - Enfield Lock) to better suit British production standards. The British Army adopted the L7 as its standard GPMG for light infantry support duties in 1963 after trials in 1956 between the Belgian weapon and the American M60 GPMG. Some dozen variants of the line then followed with improved feeds and differing in battlefield roles.

The L7 retained its proven gas-operated, open bolt design and was a "true machine gun" in that it fed from an ammunition belt. It was chambered for the ubiquitous 7.62x51mm NATO rifle cartridge and could produce suppression firepower up to 1,000 rounds-per-minute. Muzzle velocity was rated at 2,755 feet-per-second and range was out to 1,800 meters (sighting aided by iron sights - folding rear leaf and notched front blade).
Advertisements

Original models were the L7A1 and there were followed by the L7A2 with improved feed and support of a 50-round belt-box ammunition supply. The L8A1 was a vehicle (namely tank such as the Chieftain MBT) machine gun lacking the shoulder stock and fitting with a fume evacuator / extractor and gas regulator to better operate in confined spaces. The pistol grip was also made to fold away. The L8A2 was its improved-feed version.

An optional heavy-duty tripod assembly could be affixed to the weapon to have it operate as a standard defensive machine gun.

Additional marks included the L19A1 as a heavy-barreled model and the L20A1 as a "podded" machine gun (for use as fixed weapons on attack aircraft / helicopters). The L20A2 was its improved-feed version. The L37A1 was installed on Armored Fighting Vehicles (AFV) pintle mounts and had a traditional pistol grip while also having the capability to be dismounted for use as a squad level support weapon. The improved-feed model was the L37A2. The L43A1 was a ranging machine gun and used on the "Scorpion Light Tank" series (detailed elsewhere on this site) and the L44A1 was a version taken on by the British Royal Navy for use aboard warships and assault craft. The Westland "Lynx" transport helicopter was fitted with a pintle-mounted version of the L7 designated as the L112A1.

While originally produced for the British Army by Royal Ordnance, the L7 is now manufactured by the German concern of Heckler & Koch.
Advertisements 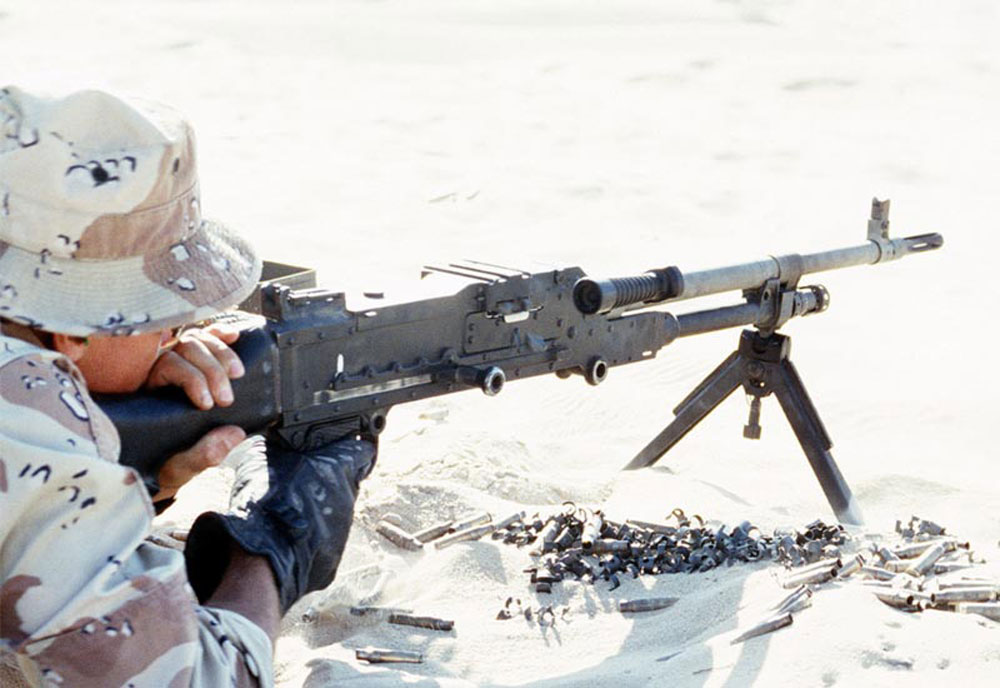