The American-made Model 1917 Enfield rifle was another period development of the German Mauser 98 series and was produced to the tune of some 2,193,429 examples before the end. 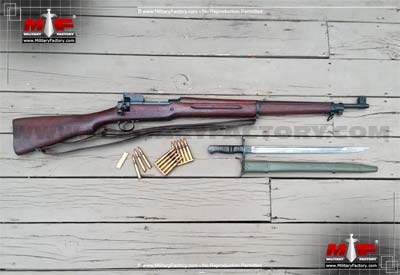 Britain had already begun the task of replacing their Short Magazine Lee Enfield (SMLE) infantry rifles in the years preceding the World War 1 (1914-1918). The Royal Arms Factory (RAF) at Enfield was charged with finding a solution to this requirement and the new service rifle was to play upon the strengths of the excellent German Mauser 98 series while providing the British rifleman with a capable man-stopper. However, the sudden explosion of events that eventually became "The Great War" effectively shelved this long-developing rifle concept and pushed the British to look for a quicker and easier-to-produce alternative ready for mass production. The British therefore took the somewhat-developed, Mauser-based concept already on hand and formatted it to fire the old standard .303 caliber British rifle ammunition. Production of the new P14 (or "Pattern 14") was fielded overseas to American factories made up of Winchester, Remington and Remington subsidiary Baldwin Locomotive Works at Eddystone, Pennsylvania. The three companies produced P14 designs which were further designated by their place of manufacture (as Winchester, Remington or Eddystone).

As America entered the First World War in 1917, it too found itself with next to nothing in the way of an established modern military arms-producing industry - let alone a serviceable standard infantryman rifle. In fact, arms production in the United States was such that there were not enough rifles being manufactured to supply every American soldier heading off to war. As American factories were already providing Allied soldiers with local-production versions of the excellent British-design Enfield Pattern 14 rifles, it was decided to utilize the type to produce a similar rifle chambered to fire the American standard .30-06 caliber cartridge. This decision wisely cut down design time and lowered production costs for the new "M1917" - or "Model 1917" - rifle. Once again, Winchester, Remington and Eddystone all provided the rifle in quantity with totals being 545,511, 545,541 and 1,181,09 from these manufacturers respectively. Production for the new American rifle could even continue unhindered alongside the British P14's for both rifles were essentially the same firearm differentiated mainly by their chosen calibers.

The M1917's external appearance was characterized by its encapsulating wood work and occasionally exposed metal works. Traditional sights were located aft over the receiver with the bolt-action lever situated over the right side of the gun body in the usual way. The forward site was appropriately affixed nearer the muzzle. The trigger was underslung and located at the base of the integrated rifle buttstock-and-grip. Sling loops were featured at the buttstock underside and under the forend. The American model - recognized as the "American Enfield" - was fed from a 6-round magazine supporting the more powerful (compared to the British .303) .30-06 Springfield (8.62x63mm) cartridge and its action managed through the aforementioned bolt lever on a Mauser-based turn bolt (many long guns of the period were influenced by the classic German Mauser design). Muzzle velocity was listed at 2,700 feet-per-second while the gun weighed in at just over nine pounds. As was common to all service rifles in The Great War, a bayonet could be affixed to the M1917, providing for a lethal "reach" against enemy soldiers at close quarters.
Advertisements

The American M1917 proved a bit more forgiving in some regards for if the British .303 cartridge was to be inserted into the firing chamber (by mistake, for example), and though the M1917 could not fire the round but, the action would produce a "repairable" jam. Conversely, if the American Springfield round were introduce into the British Enfield P14 rifle, it would make the rifle inoperable. Thusly, the weapons and their ammunition were not wholly interchangeable as one might suspect, despite their associated origins.

In the end, American soldiers were fielded with a solid and reliable (though notably heavy) bolt-action rifle where up to three quarters of US infantrymen fielded the type by war's end. Surplus M1917's remained in large quantity after November 1918, with many seeing storage while a good number were released into civilian hands. A total of some 2,193,429 production examples were delivered. Operators of the type went on to include the United States, United Kingdom, Philippines, France and China.

Between wars, Remington furthered the Mauser concept in their commercial Remington Model 30 rifle series. The M1917 also survived in a 7mm form sold to Honduras and a modified 8x57 Mauser form delivered in time for the Spanish Civil War.

The M1917 Enfield did in fact see continued service into World War 2 though these rifles were often limited to training forces, reserve units, lend-lease customers or "home guard" elements. China and France (Free French) were both Lend-Lease recipients as were the British taking care to mark their arriving M1917 rifles with a red stripe to differentiate them from their own P14 rifles. American mortar and artillery crews were issued the rifle for a time during the conflict.

It is not wholly uncommon to find the M1917 still in serviceable condition, even today, as proven by its many appearances in weapons raids conducted by coalition forces during the Iraq war (Operation Iraqi Freedom).
Advertisements 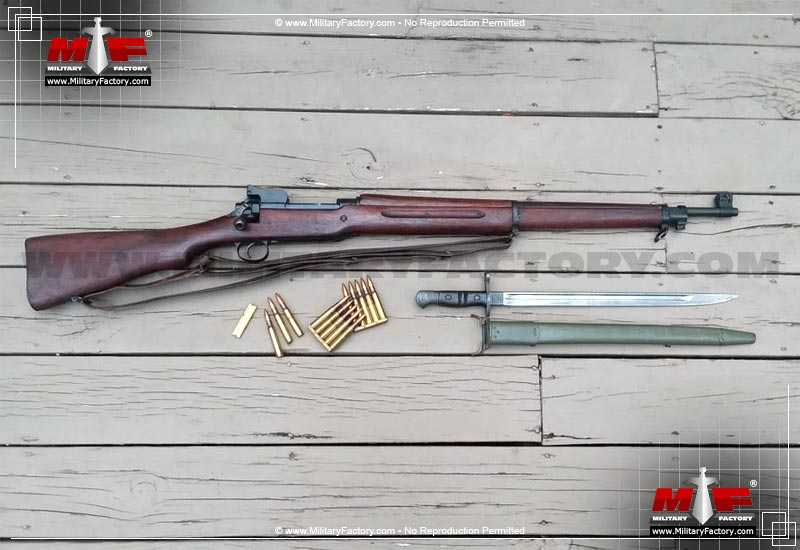 Image copyright www.MilitaryFactory.com; No Reproduction Permitted; Image courtesy of Steve B. via email.