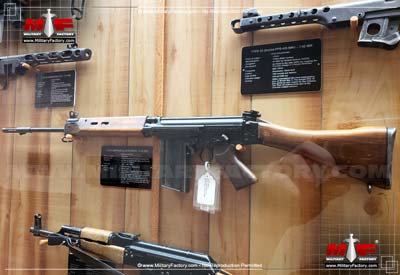 The L1A1 was the standard British Army infantry assault rifle from the mid-1950's through to the late 1990's, ultimately being replaced by the bullpup-configured, 5.56mm-chambered L85A1 of today. The L1A1 stemmed from a British military need to arm its infantry with a modern automatic weapon chambered for the widely-accepted 7.62x51mm NATO standard cartridge. Development of their own assault rifle (the bullpup "EM-2") was eventually abandoned, leaving the Army to look elsewhere. Since there were limited locally-produced possibilities, the British landed an agreement with the Belgium firearms firm of Fabrique-Nationale (FN) to license-produce the hugely successful FN FAL design. The L1A1 would appear very much like the original Belgian FN FAL design in both form and function though the British production process would center around imperial measurements, this eventually making for subtle nuances in overall design and engineering so much so that the two weapon system's parts were not wholly interchangeable. The British Army designated their FN FAL version as the "L1A1". Early versions were, in fact, purchased directly from FN but this later gave way to localized procurement.

Outwardly, the L1A1 featured a conventional layout made up largely of the receiver containing the critical internal working components. The ejection port was set to the right side of the body. The pistol grip was ergonomically formed and integrated into the ring-guarded trigger system. The magazine well was just ahead of the trigger group and accepted the standard 20-round straight detachable box magazine consistent with (though slightly different from) the FN FAL. A 30-round magazine count was also made available. The weapon was chambered for the 7.62x51mm NATO standard rifle cartridge and its action centered around the gas-operation principle with a tilting breech block. As such, the forward handguard housed the gas cylinder over the barrel, the latter extended well ahead of the gun and capped by a slotted compensator. The gas cylinder was used to tap gasses of fired rounds and return them within the recoil process, ready to fire the next available cartridge in succession. The L1A1 was, therefore, also known as the "Self-Loading Rifle", or SLR, to indicate its repeat-fire action. The stock was fixed and there were sights at the rear of the receiver as well as the extreme end of the forward handguard. A positional grip-covered carrying handle was set to the left side to help facilitate transport. The original L1A1 production form was semi-automatic fire only. The upcoming L2A1 featured a full-automatic fire mode function which broadened the weapon's tactical usefulness.

Introduced in 1954, the L1A1 provided the British Army with a solidly-built automatic rifle that proved quite capable in then-modern operations, lasting in frontline service for some 30 years before the arrival of the L85A1 series. Production was handled out of the Royal Small Arms Factory as well as the Royal Ordnance Factory. The L1A1 is also categorized as a "Battle Rifle" for its full-size, full-power cartridge and automatic function.

The L1A1 also served with the Australian Army as the L1A1 and the Canadian Army as the "C1". Both nations produced it under license and have since replaced the weapon with the F88 Austeyr and C7 series respectively. The C2 LMG is the Canadian light machine gun form with a heavy barrel and bipod. Other operators went on to include Brunei, Jamaica, Kuwait, Malaysia, New Zealand, Papua New Guinea, Rhodesia and Sierra Leone.

The L1A1 saw combat service in (but not limited to) the Suez Crisis, Vietnam War, Cambodian Civil War, the Falklands War and the 1990-1991 Gulf War.
Advertisements 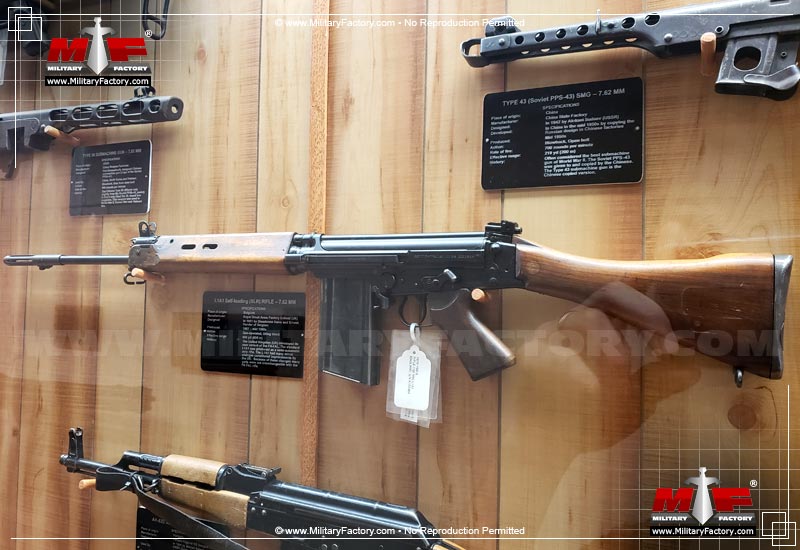 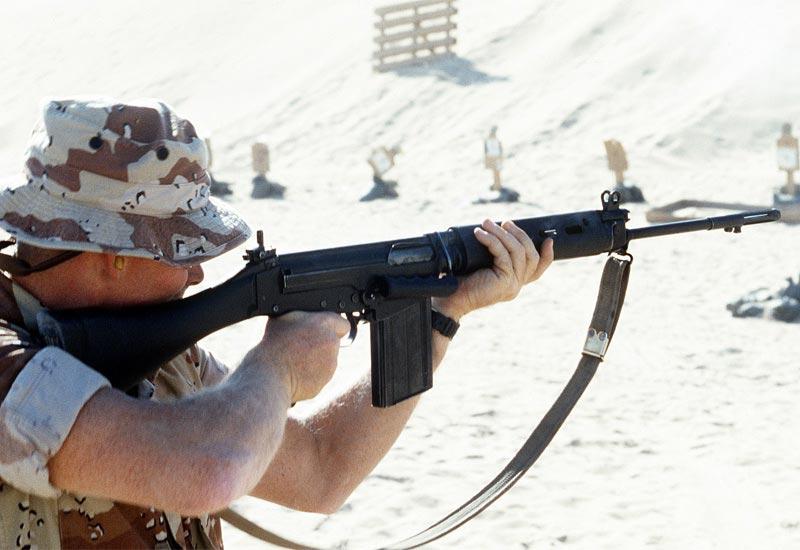 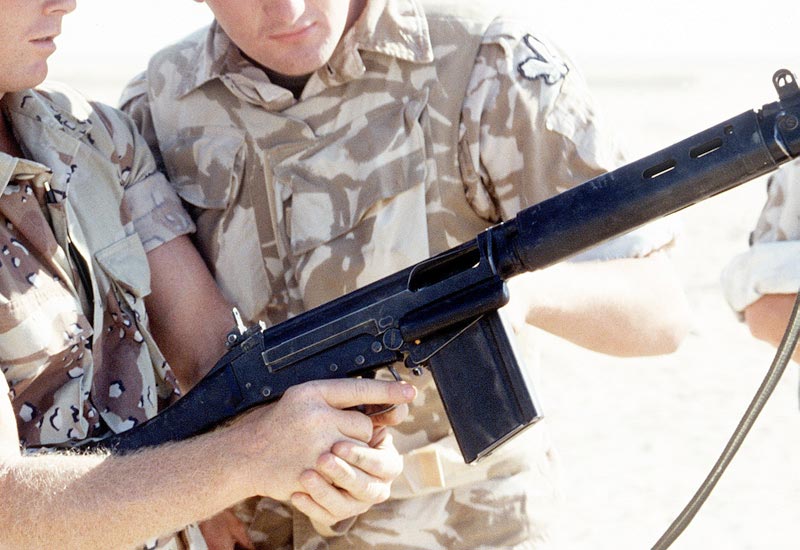 An instructor addressed the L1A1 Battle Rifle with student.
4 / 5 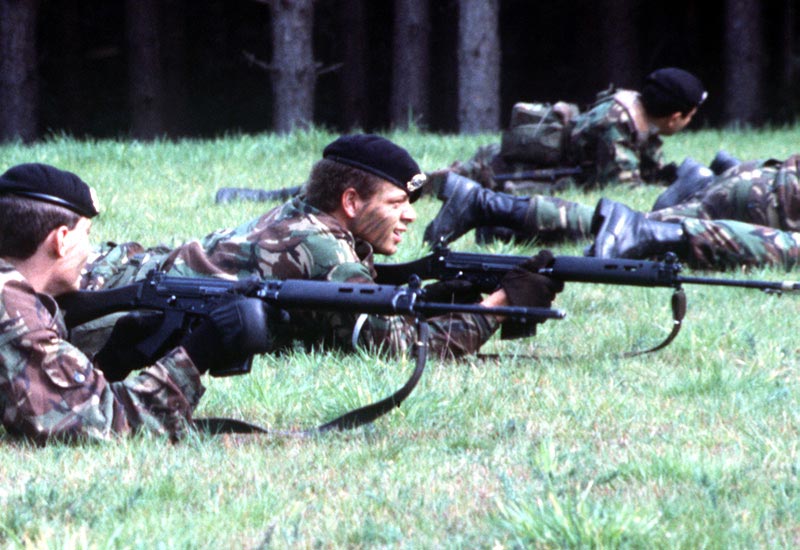 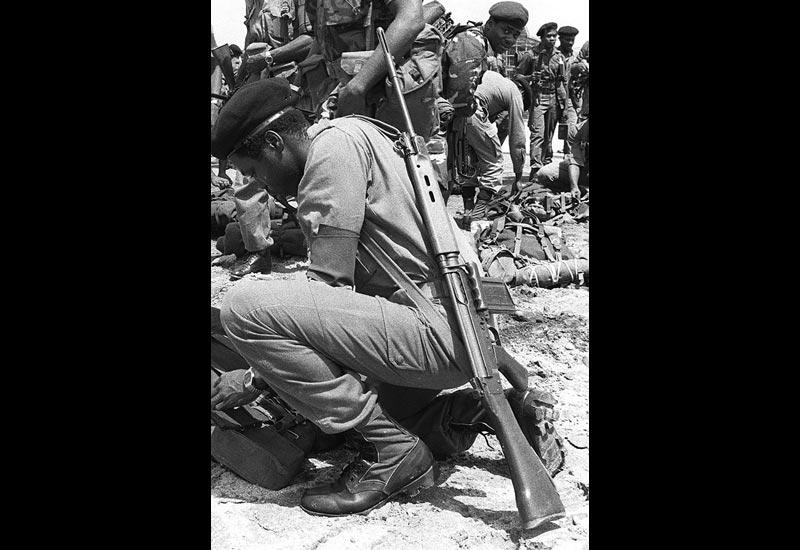 A soldier sports an L1A1 SLR on his back during Operation Urgent Fury.
❮ ❯