The M2 Carbine was nothing more than a selective-fire capability added to the classic M1 Carbine form - along with a 30-round detachable box magazine. 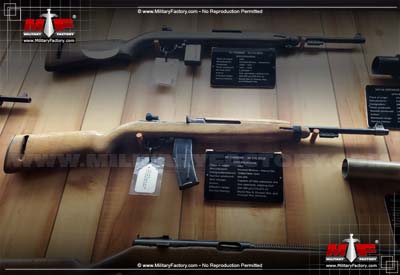 The original M1 Carbine was developed during the World War 2 period (1939-1945) to better equip American paratroopers as they headed into combat and to provide a viable weapon for vehicle crews and second-line troopers finding themselves having to fight their way out. This weapon became a storied part of the American involvement in the conflict and was ultimately produced in over 6.1 million examples with use becoming global. In began life in a 1938 request which gained traction in 1940 as America stood closer than ever to entering the European war. The result was a highly effective, semi-automatic offering that could serve its intended battlefield elements well and went on to spawn several notable variants.

The M2 Carbine was an branch of the storied M1 tree with its own origins found in May of 1944. Whereas the M1 Carbine was only capable of semi-automatic-fire-only, the M2 variant brought a selective-fire capability with it as well as support for a 30-round, curved detachable box magazine. The original M1 design did, at least initially, feature a selective-fire capability but this feature was dropped during its development to hasten the M1 into service. It was also limited by a 15-round detachable box magazine.

The M2 came about as American demand for a more potent lightweight weapon arose during the fighting in Europe and the Pacific. M1 Carbines had excellent qualities in that they were handy and portable, intended for fighting within the short-to-medium range spheres. These qualities were to be carried over in the M2 offshoot but the higher ammunition count with full-automatic capability would give the infantryman more on-the-spot firepower. The new gun, in its pilot form, was known as the "T4" and designed by the engineers of the Inland Division of General Motors.

At its core, the M2 was simply nothing more than the M1 with the selective-fire capability installed. This change lever was to be found along the left side of the gun body and relied on a sear mechanism for its general function. The gun body remained of solid wood, though made heavier than in the M1, with the metal components were inlaid as usual while the grip handle, shoulder stock, and forend were all integral. Sighting was through the same forward/rear iron fittings as in the improved M1 forms. Sling loops were set at the shoulder stock and forend for a shoulder strap to be fitted and aid in transporting the weapon when on-the-march. The trigger unit was slung under the receiver in the typical fashion and the magazine well was found just ahead of it. Internally, the same gas-operated, rotating bolt action (though modified round as opposed to original flat-top design) was used and the same bayonet lug was also in play.

Effective listed range was between 200 to 300 yards and rate-of-fire under full-automatic reached 750 rounds-per-minute. Even when fired as such, the weapon was considered very manageable despite its lightweight, compact form. It also provided a good reach and good penetration-at-range which led to many to prefer this carbine over more limited, though established, submachine gun types of the period.

Production of the new gun totaled about 600,000 units and these were manufactured from a period spanning 1944 to 1945. An initial contract for 500 units was awarded to Inland during September of 1944 and this early period was used to refine the T4/M2 design prior to its widespread acceptance in the war. It became available in quantity during the early-to-middle part of 1945 with field conversion kits "T17" and "T18" introduced to make the appropriate changes to existing M1 models. However, this late entry into the war limited its impact for the war in Europe was over in May of 1945 and the war in the Pacific followed in August.

The gun went on to see considerable despite the end of the war for it was showcased in the upcoming Korean War (1950-1953) and, to a more limited extent, the Vietnam War (1955-1975) that followed. In the Korean War, the M2 represented the most quantitative carbine to see combat action for its part in the conflict. In the Vietnam War, the M2 was still in the hands of American troopers, namely special forces operatives, though by this time the weapon had seen its best days behind it. It was ultimately given up for good with the arrival of such types like the Colt AR-15/M16 which covered its battlefield role.

Only one notable variant of the M2 Carbine emerged, this being the M2A2 which were arsenal-refurbished models.
Advertisements

Semi-Automatic
One shot per trigger pull; self-loading or auto-loading action aided by internal mechanism; trigger management (and initial cocking) typically required by the operator; subsequent shots are aided by the unlocked / moved bolt. Full-Automatic
Rounds are automatically ejected from the breech, a new cartridge stripped from the feed and set in the chamber, and rounds are continuously fired so long as the trigger is pulled and an ammunition supply exists. Short-Stroke Piston
Type of gas operation typically found in rifle-type arms; relatively short amount of piston movement with reliance on sudden blow for quick acceleration of said piston; lever connected to the bolt is actuated, taking on the resultant energy, subsequently passing it on to the awaiting bolt. Gas-Operated
Gas-operated system is featured, typically involving a gas cylinder and rear-driven piston directing energy to the bolt component. (Material presented above is for historical and entertainment value and should not be construed as usable for hardware restoration, maintenance, or general operation - always consult official manufacturer sources for such information) 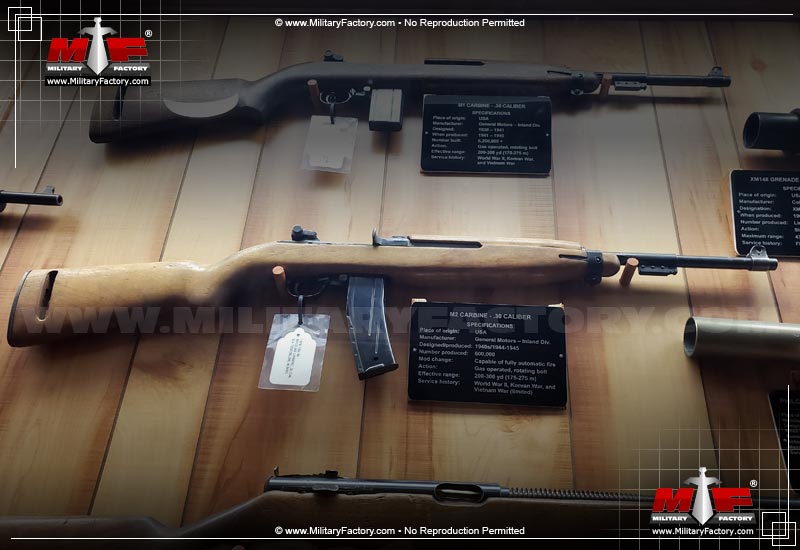