The M16 of 1963 began the line of classic assault weapons by Colt - since manufactured globally and encompassing endless offshoots of the base design. 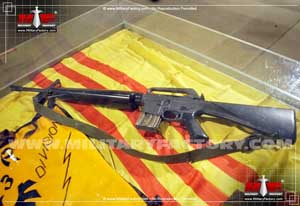 During World War 1 (1914-1918) the standard American service rifle was the bolt-action Springfield M1903 and this remained the status quo heading into World War 2 (1939-1945). During that conflict, semi-automatic forms were beginning to grow in popularity and effectiveness and, thusly, the semi-automatic M1 Garand was adopted as standard issue - offering impressive repeat firepower and unmatched reliability. The famous Garand was then itself replaced a related offshoot, the M14, which chambered the 7.62x51mm NATO standard rifle cartridge and fed from a higher-capacity 20-round box magazine. This weapon was in wide circulation by the time of the American involvement in the Vietnam War (1955-1975) and 1.5 million followed in production - which ended in 1964. The M14 went on to replace several key World War 2-era small arms - the Garand rifle and M1 Carbine, the M1918 BAR, and the M3 and Thompson submachine guns - such was its importance in the American inventory.

By the time of the Vietnam Conflict, the Soviet Kalashnikov AK-47 Assault Rifle was firmly entrenched worldwide. This excellent design was influenced by the German World War 2-era MP44 and went on to be produced in the tens of millions with operators seen in all four corners of the world. NATO, let alone the United States, had nothing like this popular weapon and was forced to make due with a hodge-podge of designs, be they emerging from America or Europe.

Back in 1956, prolific firearms engineer Eugene Stoner worked on a new automatic rifle concept for the U.S. military chambered in 7.62x51mm NATO. This became the ArmaLite "AR-10" under parent company Fairchild Aircraft. The weapon relied on a rather forward-thinking "straight-line" internal design which aided accuracy and stability, particularly during automatic fire. Using forged alloy components, the weapon proved lighter and easier to handle that contemporary "Battle Rifles" of the day like the M14 and Belgian FN FAL. However fewer than 10,000 units were produced.

In 1957, the design was made more compact and revised to chamber the .223 Remington cartridge - giving birth to the "AR-15". It also featured an ambidextrous charging handle set within the integral carrying handle itself. No flash suppressor was fitted. Financial issues forced the ArmaLite AR-10 and AR-15 designs to be sold to Colt who held the history and know-how to mass-produce a good firearm. The AR-15 went on to be adopted by a plethora of operators the world over and formed the basis for the American military's "M16" - this weapon given the formal designation of "Rifle, Caliber 5.56mm, M16" in the U.S. inventory.

The M16 was chambered for the 5.56x45mm intermediate rifle cartridge and fed from a 20-round detachable box magazine. Its general form and function remained faithful to the original AR-15, a gas-operated, rotating bolt (direct impingement) system being in play. The weapon weighed a manageable 7lb unloaded and measured 3.5 inches long, 20 inches for the barrel assembly. A carrying handle was integrated to the upper receiver and the buttstock and handguard both rounded for ergonomic comfort. At the muzzle was a slotted brake. The magazine feed sat ahead of the pistol grip handle in the usual way and ejected cartridges emerged from a right-hand-side port. The base weapon ended up influencing a slew of related products eventually encompassed civilian semi-automatic forms, Designated Marksman Rifle (DMR) forms, sniper weapons, assault rifles, a submachine gun variant, etc...

It was in 1963 that the original M16 first came into service with the United States armed forces (the USAF in fact - these with three-prong flash suppressors). American elements had been operating in Vietnam since 1950 and their presence only grew during the next decade. The M16 was found to be a good fit for the average-sized American infantryman as it was light, compact, and relatively easy-to-handle while also touted as a low-maintenance product. The jungle confines of the growing war seemed to fit the weapon's capabilities well.

After some time in field usage, the rifle began to gradually showcase issues due to a U.S. Army change in the rifle's cartridge powder specification. This led to excessive fouling of the weapon's internals, including the precisely tuned gas system. The low-maintenance selling point was also another factor which led to issues affecting battlefield reliability. Thusly the reputation of the Vietnam-era M16 rifle as a consistently jamming weapon was born.

This exposure and subsequent feedback led to a modified, improved model in the "M16A1" being taken into service in 1969. This form went on to officially supplant the M14 line and its improvements included a bolt-assist feature (which helped to prevent "stuck" cartridges in the action of being loaded), a chrome-plated bore, and a higher-capacity 30-round detachable magazine. As a result, battlefield reliability was improved as was tactical flexibility. The M16A1 was the standard rifle of American warfighters throughout the remainder of the Vietnam War and was, itself, succeeded by the improved "M16A2" model of 1983.
Advertisements

USMC forces were the first to adopted the A2 models and they were then followed by the Army in 1986. The model introduced a more effective 5.56mm cartridge and added a new, adjustable rear sighting device. Other changes included a heavier barrel assembly, revised pistol grip and buttstock units, and a case deflector fitted near the ejection port. A semi-automatic and thee-round burst firing function were also part of this new variant and the rifle managed an extensive combat service record all its own and continued to solidify the M16 line as a proper frontline combat weapon.

The "M16A3" was a limited-production version based on the M16A2 while featuring the trigger group of the M16A1. This model was mainly used by specialist forces including the U.S. Navy SEALs.

In 1998 arrived the fourth, and latest, incarnation of the now-long-running M16 line through the "M16A4". The iconic carrying handle was made removable and, in its place, a section of Picatinny rail could be fitted over the receiver - giving some customization to the weapon by allowing implementation of various optics, aimers and the like. Despite the changes, the general design lines of the M16 remained intact.

There have been many other derivatives witnessed throughout the M16 family line: the Colt Model 655 and Model 656 rifles were specialized sniper versions fielded during the Vietnam War and the XM177 was an early-form carbine model of the M16 also debuting during the conflict. The Model 733 continued the carbine approach and included features of the M16A2. The M231 "FPW" became a specialized "Firing Port Weapon" intended form armored vehicle occupants (primarily the M2 Bradley IFV). The Mark 12 was a DMR model while the C7 and C8 were Colt Canada offshoots for service with the Canadian Army. The Model 635 was similar in scope to the Colt Commando but chambered for the popular 9mm Parabellum pistol cartridge. The La France M16K was a modification of the M16 system intended for special forces elements and mated the M16 with a blowback system of operation.

More modern incarnations of the M16 include the M4 Carbine and the Heckler & Koch HK416 (both detailed elsewhere on this site). The M4 has largely succeeded the full-length M16A4 rifle in both Army and USMC service after combat experiences in Afghanistan and Iraq. The M4 is more compact and lighter while retaining much of the functionality of its larger cousin. It was introduced in 1994 and holds its own family of subvariants.

The HK 416, from German gun-maker Heckler & Koch, is marketed as an improvement on the M4 line while utilizing HK's in-house short-stroke gas piston developed for the full-length HK G36 assault rifle. The HK416 was introduced in 2004 and features several sections of rail for tactical accessories while retaining the 5.56x45mm NATO chambering. It also manages its own collection of subvariants and has already been featured in more modern American conflicts since its inception (it is said to be the weapon that killed Osama Bin Laden).

In one form or another, the M16 is set to remain a fixture on the modern battlefields for decades to come - rivaled only by the popularity and effectiveness of the AK-47 family which continues in service today and has spawned its own line of far-reaching weapon types - rifles, assault rifles, light machine guns, submachine guns, etc... Regardless, the M16 design holds its own level of popularity and is one of the more successful firearms of our time - production has now reached beyond 8 million units since 1959. Manufacture names include Colt's Manufacturing Company, Daewoo Precision Industries (South Korea), FN Herstal (Belgium), H&R Firearms, General Motors (Hydramat Division), Elisco, U.S. Ordnance and others.
Advertisements 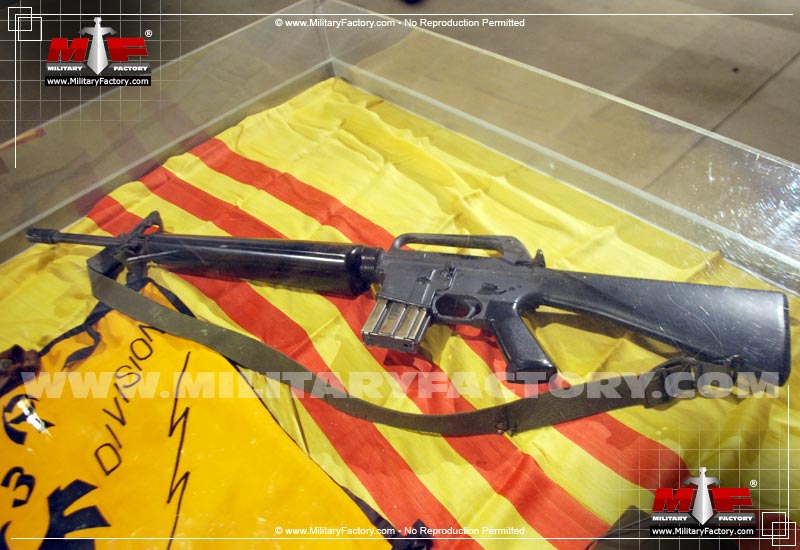 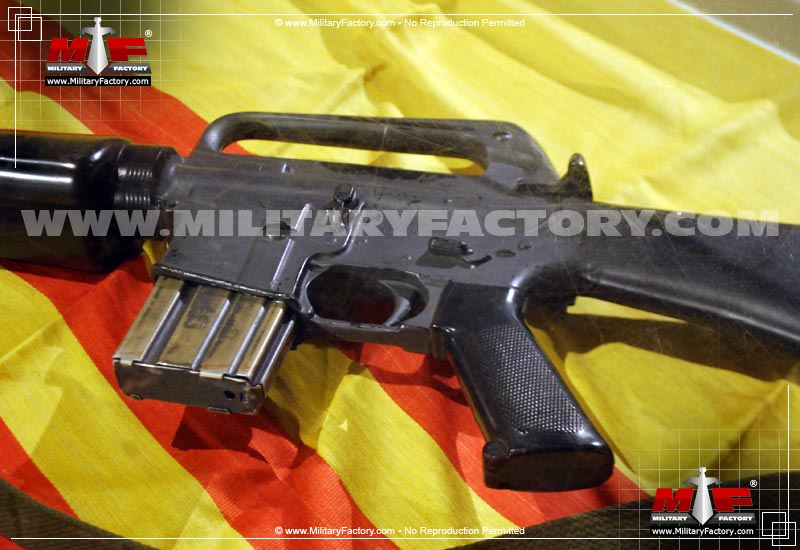 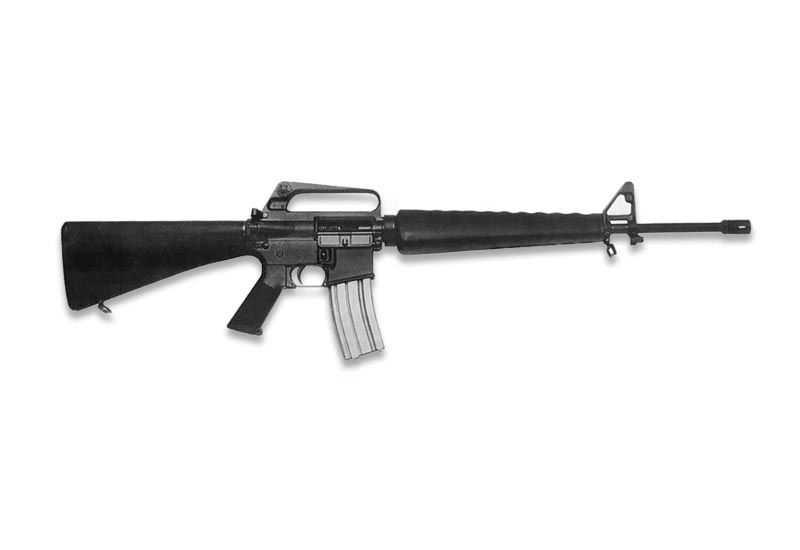