USS California BB-44 made up one part of the two-strong Tennessee-class of battleships, earning seven Battle Stars for her service in World War 2.

Authored By: Staff Writer | Last Edited: 11/01/2018 | Content ©www.MilitaryFactory.com | The following text is exclusive to this site. 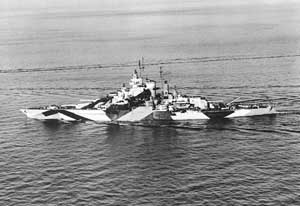 USS California (BB-44) served as one of the key components of the American Navy push to Tokyo, Japan during actions in World War 2 (1939-1945). Despite the bulk of her notable service coming in this grand war, the vessel was actually a product of the First World War (1914-1918) and laid down before America had formally committed to that conflict. She became a Pearl Harbor veteran surviving the Japanese assault of December 1941 and was wholly modernized in 1942 to become essentially an all-new fighting platform. Like so many other American warships of the war, USS California became a decorated participant and survivor of the Second World War. A weathered and aging workhorse whose services were no longer needed in the age of aircraft carriers and attack submarines, the vessel was stripped of her useful parts and her hulk sold for scrapping during the early Cold War period.

During World War 1 (1914-1918), the United States government approved the construction of a new, two-strong battleship group to be known as the Tennessee-class. This group would include the lead ship, USS Tennessee (BB-43), and her sister, USS California (BB-44). The latter was ordered on December 28th, 1915 and construction undertaken by Mare Island Naval Shipyard of California. Her keel was laid down on October 25th, 1916 and she was launched to sea on November 20th, 1919 - just after the Armistice was signed to end the fighting in Europe.

Regardless the vessel was commissioned on August 10th, 1921. Her construction on the American West Coast gave her easy access to the important Pacific region though her design was such that she was allowed to traverse the Panama Canal to reach the East Coast. Her initial assignment was with the Pacific Fleet/Battle Fleet to which she served as flagship for a good twenty-year period (1921 into 1941). This period was relatively quiet compared to the fighting witnessed in the World War prior and her duties ranged from goodwill stops and joint service exercises (Army and Navy) to general gunnery and crew training. In 1929, her armament was updated for the better. In May of 1940, she was given a radar fit for a decided advantage on the battlefield. She was assigned to Hawaii amidst growing tensions with the Empire of Japan concerning the Pacific region.

USS California was in Hawaiian waters when all boiled over into total war between the two nations. The Japanese enacted their surprise attack on Pearl Harbor in an attempt to cripple the U.S. Pacific Fleet and USS California made up one of the many vessels of "Battleship Row" in the assault. The attack commenced on December 7th, 1941 and formally thrust the United States into World War 2 on the side of the Allies.

During the attack, California took two torpedoes that resulted in severe damage which created additional problems from flooding. The situation was made worse with a direct bomb hit on her deck which set off ammunition stores that claimed the lives of some fifty sailors. Beyond the flooding, the damaged warship and her crew now had to content with fires spreading about. In all, California lost one hundred sailors in the attack and suffered over sixty wounded. Despite the damage and having flooded enough to settle on the bottom of the harbor, however, she remained repairable. An initiative to float her was put into action and in late March of 1942, this was done as her hull was lifted into dry dock for critical repair work.
Advertisements

Once the vessel was patched to make her seaworthy, California made her way to the Puget Sound Navy Yard in Washington for more substantial repair work. Some of her systems were completely replaced with more modern solutions and her profile was forever changed when her two smoke funnels were combined into a single, more efficient, structure. Her AA protection was improved and her Fire Control System (FCS) was upgraded. Flooding control was also addressed through a new compartment arrangement. California also received a revised beam which precluded her traversing of the Panama Canal, ensuring her future combat service now lay primarily in the Pacific Theater.

USS California was not made battle-ready until late January of 1944. She completed her shakedown cruise off the California coast as her new systems and overall design were tested. Her first course of action was in supporting Allied forces in the invasion of the Marianas where her powerful main battery was brought to bear against inland enemy positions - the guns being used to "soften" the enemy prior to the amphibious assault. She was used in similar fashion during the American assaults on Guam and Tinian during July-August.

From there, California was called to support the operation to take back the Philippines. She took part in the Battle of Surigao Strait in October of 1944. The Allies were able to claim the victory and liberate Leyte Island in the process, leading the eventual liberation of the entire Philippine archipelago. This victory also claimed vital oil supplies away from the Japanese war machine.

In January of 1945, USS California was the victim of a Japanese kamikaze strike which claimed forty-four of her crew and injured 155 in one fatal blow. Repairs were made as best as possible to keep her battle-worthy without wholly removing her from the war. California remained on station until the end of the month to which she was then sent back to Puget Sound for much-needed repairs.

USS California was then back in action to support the Allied landings at Okinawa, one of the final stepping stones to the Japanese mainland. She began this leg of her war tour in June of 1944 and remained on station until July 21st. She was assigned as part of Task Force 95 and entered the East China Sea for other work until the Japanese surrender came in mid-August. California was recalled to Okinawa by way of the Philippines for September and supported Allied landings at Honshu. She remained on station until October 15th.

Finally recalled stateside, USS California made it to Philadelphia along the American East Coast by way of Singapore, Ceylon, and South Africa on December 7th, 1945 - exactly four years to the day of the Japanese surprise attack on Pearl. She entered reserve status on August 7th, 1946 and was formally decommissioned on February 14th, 1947 - her service to a grateful nation now complete. Her presence was struck from the Naval Register on March 1st, 1959 officially ending her career with the United States Navy. Her hulk was sold for scrapping on July 10th, 1959.

During her tour of duties, USS California claimed a total of seven Battle Stars and was awarded the World War 2 Victory Medal and the Navy Occupation Service Medal (with Asia Clasp). During her time afloat, she was affectionately known as "The Prune Barge". Her sister ship, USS Tennessee (BB-43), fared equally well and herself became a proven war veteran having earned 10 Battle Stars, citations, and medals. She too was sold for scrapping - on the same day as her sister USS California.
Advertisements 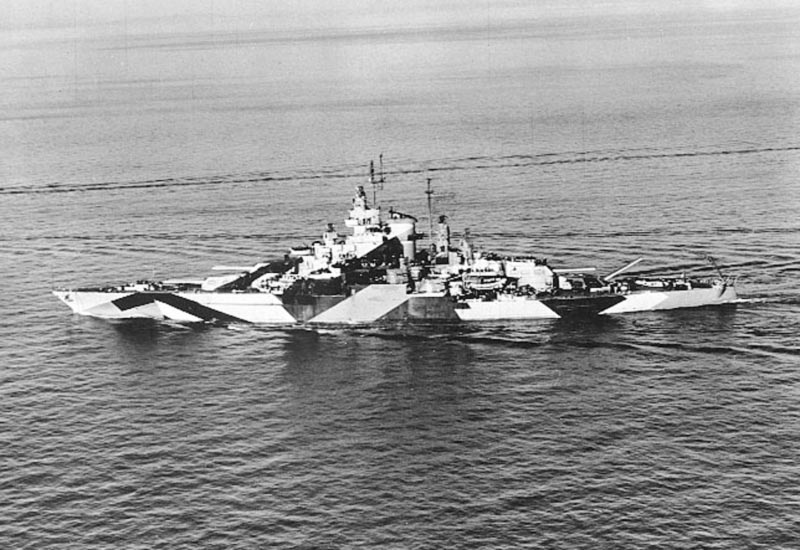