ROKS Incheon FFG-811 is the lead ship of her six-strong group, forming an important part of the naval defense of South Korea. 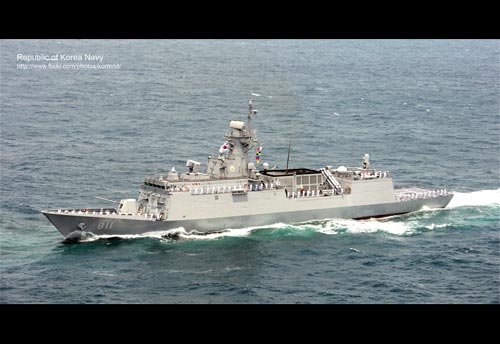 South Korea's close proximity to two potential adversaries in China and North Korea make the Republic of Korea Navy one of the most important branches of service for the peninsular nation. The service utilizes all manner of warships and submarines to cover a bevy of sorties needed in deterrence and direct-contact operations. The frigate group alone encompasses three major designs in the Daegu-class, Incheon-class, and Ulsan-class warships. The Incheon-class accounts for six total ships led by ROKS Incheon (FFG-811) herself, a multi-mission-minded warship launched ny Hyundai Heavy Industries (HHI) on April 29th, 2011, delivered to the navy in January of 2013, and fully commissioned on January 17th, 2013.

As of this writing (2021), she maintains an active presence in the South Korean fleet.

ROKS Incheon (FFG-811) was born from the "Future Frigate eXperimental" (FFX) initiative having origins in the early part of the 1990s. Reworked in the following decade, the South Korean Navy required some twenty-four 3,000 ton vessels to succeed aging, outgoing types. However, constraints ultimately led to just six of the lot seeing realization, and the displacement of these warships reduced twice to conclude at 2,300 tons.

As such, the Incheon-class is operated alongside the Daegu-class, which themselves number eight in all, bringing the total available modern frigate group strength to fourteen backed by four ships of the Ulsan-class (therefore eighteen available fighting frigates in all).

The Incheon-class hull measures 374 feet long with a beam of 46 feet and a draught of 13 feet. The shallow quality of the draught means the warship can operate close-to-shore and involve itself in offshore actions such as bombardment, evacuation, or amphibious support when needed. Displacement is 2,265 tons (long) under standard loads and up to 3,200 tons (long) under extreme full loads.

The ship's profile is all-modern, with clean lines and limited protrusions apparent. The hull line runs unbroken from bow to stern with slab-sided design used at the joining of the hull superstructure and hull proper. The bridge section sits directly aft of the turreted deck gun at the forecastle and the section seats the enclosed mast works among other communication and sensor outcroppings. The smoke funnels are contained amidships and are fully-enclosed while being low-profile. A brake between the funnels and the hangar enclosure showcase crossed missile launcher units. The helicopter deck is positioned directly over the aft-end of the warship.©MilitaryFactory.com
Advertisements

The warship is powered through a conventional propulsion scheme arranged in COmbined Diesel-Or-Gas (CODOG) involving 2 x MTU 12V 1163 TB83 series diesel engines with 2 x General Electric LM2500 gas turbines. The CODOG allows the warship to utilize diesel or gas power under varying conditions, enhancing fuel efficiency, performance, and operational ranges. Each shaft is mated to a diesel engine and a geared gas turbine, the former used for general cruising and the latter coming into play for high-speed dashing actions when needed. All told, the vessel makes headway at 30 knots in ideal conditions and can range out to 4,500 nautical miles.

Aboard is a typical operating crew of 140 personnel encompassing officers and enlisted. An air arm is also supported for medium-lift helicopters that can be launched, retrieved, and serviced from the combination helipad-hangar deck space at the stern of the ship. Typical forms include the "Super Lynx" or AW159 series types which offer Over-the-Horizon (OtH) and submarine-hunting (ASW) capabilities.

The ship is outfitted with the SPS-550K air-search 3D radar, the SPG-540K fire control radar, and the SQS-240K hull-mounted sonar. The SAW-540K EOTS "Naval Shield" Integrated Combat Management System (ICMS) rounds out the suite of powerful sensors and processing equipment available to the crew.

All told, the warship can deter or neutralized targets on land, in the air, on the sea, or under it - making it a true multi-mission frigate, frigates bridging the gap between smaller corvettes and larger destroyers.©MilitaryFactory.com
Note: The above text is EXCLUSIVE to the site www.MilitaryFactory.com. It is the product of many hours of research and work made possible with the help of contributors, veterans, insiders, and topic specialists. If you happen upon this text anywhere else on the internet or in print, please let us know at MilitaryFactory AT gmail DOT com so that we may take appropriate action against the offender / offending site and continue to protect this original work.
Advertisements

SHALLOW DRAUGHT Vessel's hull design is such that it can operate in close-to-shore / shallow water environments.
PRIMARY TURRET(S) Main armament is housed in primary turret(s) arrangement offering enhanced protection.
ANTI-AIRCRAFT Onboard systems alert and protect the vessel from airborne, low-flying airborne threats through ballistic and / or missile weaponry.
OVER-THE-HORIZON An Over-the-Horizon operational capability is granted to the vessel, typically through launched fixed-wing / rotary-wing aircraft.
MISSILE ARMAMENT The vessel supports the launching of missiles against airborne, waterborne, or land-based targets at range; typical of modern designs.
TORPEDOES Ability to launch torpedoes against ocean-going targets.

(Not all weapon types may be represented in the showcase above)
1 OR 2 x Medium-lift navy helicopter launched, retrieved, and supported through the stern-based helipad-hangar deck area. 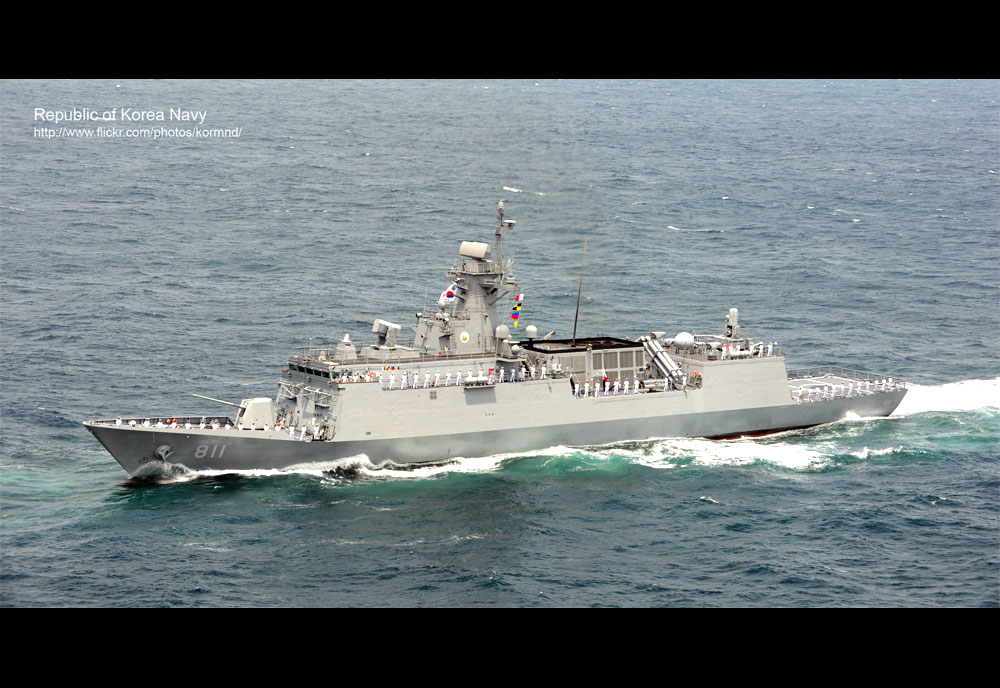 Image release from the Republic of Korea Armed Forces.