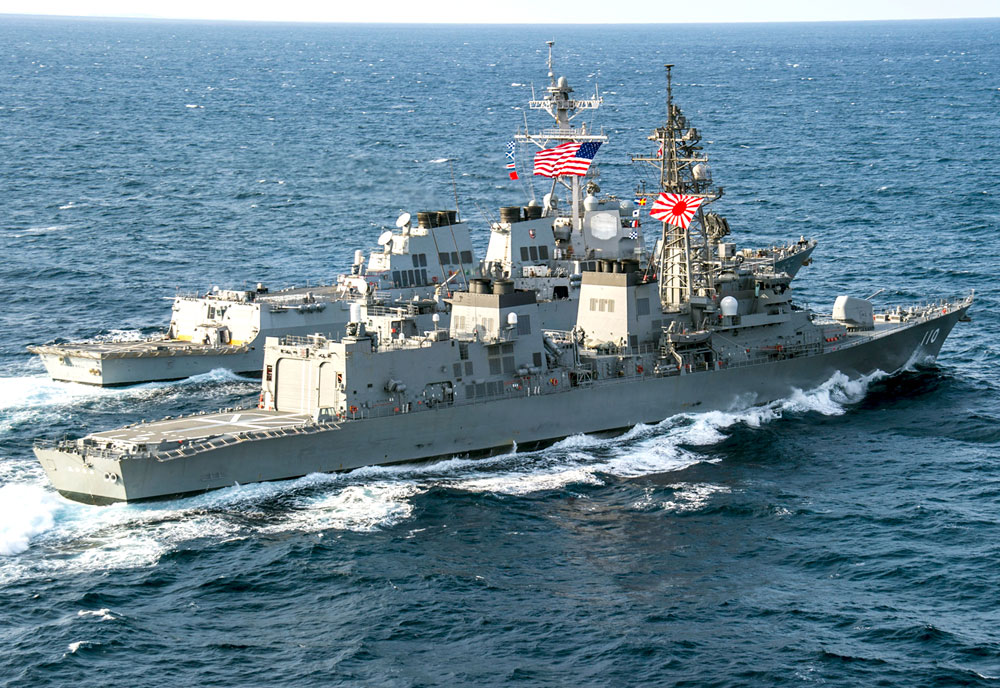 Five ships make up the Takanami-class guided-missile destroyer group for the modern Japanese Navy - JS Takanami being its lead ship.

The island nature of Japan forces the nation to invest in a sizeable navy made up of all manner of warships including submarines, amphibious assault support ships, and surface combatants. In the latter category, the Japan Maritime Self-Defense Force (JMSDF) relies on forty or so destroyer-type vessels made up of several groups of fighting ships. Among their number is the Takanami-class which is made up of five total warships in the 6,300 tonnes range - led by JS Takanami (DD-110) herself.

JS Takanami (DD-110) was ordered in 1996 and constructed by the specialists of IHI Marine United with the keel being laid down on April 25th, 2000. The vessel was launched to sea on July 26th, 2001 and formally commissioned into service with the JMSDF on March 12th, 2003 assigned to Yokosuka. She remains in active service as of this writing (2020).

As built, Takanami features a running length of 495 feet with a beam measuring 57 feet and a draught of 17 feet. Power is from a combined gas turbine arrangement involving 2 x Ishikawajima Harima (General electric) LM2500 gas turbines and 2 x Kawasaki (Rolls-Royce) SM1C gas turbines. These generate upwards of 60,000 horsepower to drive 2 x Shafts astern, propelling the vessel to speeds of 30 knots in ideal conditions.

Aboard is a crew of 175 officers and sailors while the ship is outfitted with a bevy of systems and sensors to meet any modern-day challenge at sea. This includes the OPS-25B radar, the OPS-28D surface-search radar, the OQS-5 sonar, the UQR-2 towed sonar array, and the Type 81 Fire Control System (FCS). Included in the ship's suite is the NOLQ-3 Electronic CounterMeasures (ECM) system as well as 4 x Mk 137 chaff dispenser units.

Armament is a mix of conventional and missile weaponry. Over the forecastle lies a single 127mm /54 caliber OTO-Breda turreted deck gun backed by 2 x 20mm Phalanx Close-In Weapon Systems (CIWSs). The heart of the warship's armament suite is a 32-cell Vertical Launch System (VLS) showcasing the Evolved Sea Sparrow Surface-to-Air Missile (SAM) or the RUM-139 VL-ASROC anti-submarine missile. Beyond this are twin SSM-1B (Type 90) anti-ship missiles in quadruple launcher units. Rounding out the weapons aboard the warship are 2 x Type 68 triple torpedo tubes.

All told, the vessel can engage aerial, surface, and underwater targets with extreme prejudice. In addition to this, the vessel also supports a single Sikorsky SH-60J/K medium helicopter from the stern-based helipad with complete hangar facilities for at-sea service. The helicopter is outfitted with equipment for the Anti-Submarine Warfare (ASW) role giving the Takanami more firepower against enemy submarines.

The Takanami-class was drawn up to cover the air defense and anti-submarine limitations of the preceding Murasame-class destroyers introduced in the late-1990s/early-2000s. As such, the new class integrated weapon types to such as the Evolved Sea Sparrow and various anti-submarine solutions. In essence, the Takanami-class represents a further evolved Murasame-class with considerably broadened capabilities to deal with modern threats from potential enemies - namely China.

JS Takanami's profile involves a sole turreted deck gun over the forecastle with excellent firing arcs forward and to the sides. Aft of this is the bridge superstructure which holds a lattice-style main mast and is integrated into the first of two combined smoke funnels. The smoke funnels are of a low-profile, slab-sided design to promote "stealthiness". A break at midships sees twin quadruple anti-ship missile launchers installed before the aft-combined smoke funnel. This smoke funnel's structure is then integrated with the aft hull section incorporating the full-service hangar housing and the helipad. Not a thoroughly modern ship by today's standards (which sees more slab-siding and fewer protrusions used), the Takanami is nonetheless a capable fighting ship for the region.

For her part in recent Japanese maritime history, JS Takanami has been deployed to the Indian Ocean on multiple sorties to support anti-terrorism missions related to "Operation Enduring Freedom" (Afghanistan) and take up anti-piracy operations near Somalia. Several times the vessel has been used in the humanitarian role following earthquakes in 2004 and 2011.

In February of 2020, the Takanami was deployed to Middle East waters for maritime security under a U.S. directed effort in the region amidst rising tensions between the United States and regional powerhouse Iran.

(Not all weapon types may be represented in the showcase above)
1 x Sikorsky SH-60J/K Anti-Submarine Warfare (ASW) navy helicopter operated from the stern-based helipad.