Commissioned in 1928, HMS Cornwall fell to Japanese dive bombers on April 5th, 1942, bringing about an abrupt end to her short ocean-going career.

Authored By: Staff Writer | Last Edited: 02/28/2020 | Content ©www.MilitaryFactory.com | The following text is exclusive to this site. 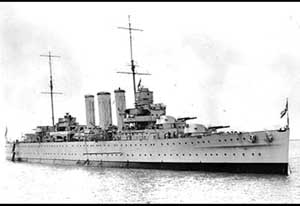 Speed and range were at the heart of steel-clad naval cruiser warships of the 20th Century. From this group of vessels was spawned the "Heavy Cruiser", a better-armed and -armored warship capable of fleet support as well as individual hunting sorties - the group nestled categorically between the Light Cruiser and the Battlecruiser. HMS Cornwall (56), of the British Royal Navy, was a warship constructed under the limitations of the Washington Naval Treaty and emerged as a Heavy Cruiser in the 10,000 ton displacement range. Her keel was laid down on October 9th, 1924 (by Devonport Dockyard, Plymouth) and she was launched to sea on March 11th, 1926. She was commissioned on May 8th, 1928 and carried Pennant Number 56.

HMS Cornwall was part of the County-class group of which fifteen were originally planned though only thirteen finished (two warships were cancelled). A total of three were lost in action and ten lived long enough to see retirement. The group was in commission from 1928 until 1959 and were succeeded by the York-class.

As built, the warship exhibited a bow-to-stern length of 630 feet, a beam (width) of 68.5 feet and a draught of 20.5 feet. Installed power included 8 x Admiralty 3-drum water-tube boilers feeding 4 x Parsons geared-steam turbines developing 80,000 horsepower to 4 x shafts. Maximum speed in ideal conditions was nearly 32 knots and range was out to 15,300 miles when cruising at twelve knots. Internally, the warship held a crew complement of 784.

Her profile was dominated by a forward bridge superstructure trailed by a series of smoke funnels , crane and rear superstructure seated over midships. Four turrets formed her main battery and were installed as pairs, one set forward and the other aft. A double-masted arrangement, consistent with ship design of the 1920s, was used. Sleek lines dominated her smooth hull which was lined with a series of port holes. Armor protection ranged from 25mm at the belt and 38mm at the decks to 25mm at the turrets and 111mm at the magazines.

In 1936, the warship underwent a refit which saw her torpedo tubes removed completely - a common action taken on many vessels of the World War 2 period. She also gained a pair of quad-gunned 0.50 caliber heavy guns for Anti-Aircraft (AA) defense and the three floatplane aircraft (recoverable), featured in the original design of 1928, were removed during 1942.

When war broke out in Europe during September of 1939, HMS Cornwall was quickly charged with hunting down German commerce raiders across the Indian Ocean. She was then relocated to the South Atlantic as a convoy escort but returned to the Indian Ocean where she claimed the German raider "Pinguin" during a sortie in May of 1941. More convoy protection work followed and the primary enemy in the region became the mighty Empire of Japan.

Her luck ran out on April 4th, 1942 when she was targeted by Japanese carrierborne warplanes - both HMS Cornwall and HMS Dorsetshire were sunk (the action made up part of the "Easter Sunday Raid", the Japanese attack on Ceylon/Sri Lanka). Over 400 British sailors perished while over 1,100 spent the night in the water before being rescued by allies. Such ended the short-lived reign of HMS Cornwall on the high seas.
Advertisements 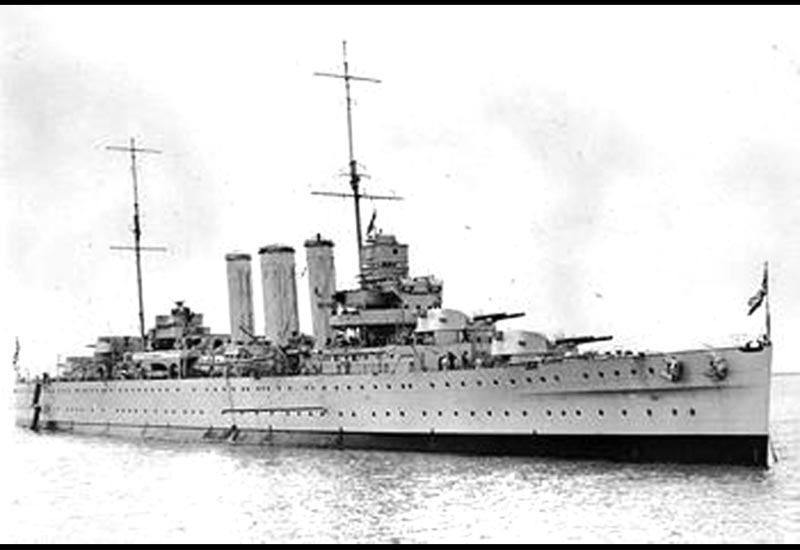