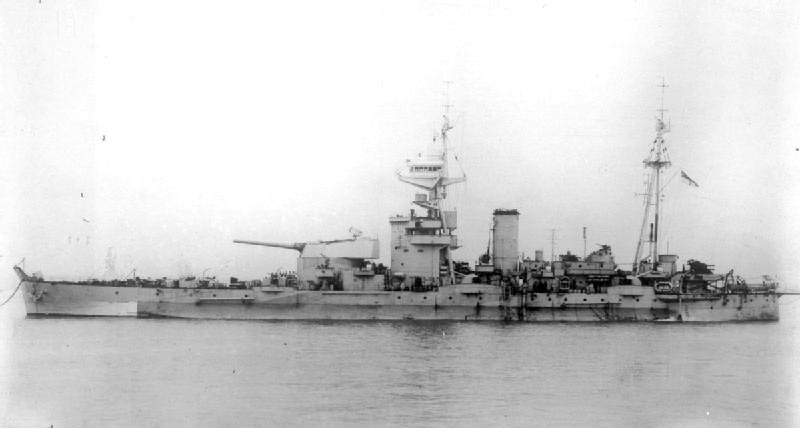 HMS Roberts led the two-strong Roberts-class of monitors for the British Royal Navy during World War 2 - she was given up in 1965 for scrapping.

Authored By: Staff Writer | Last Edited: 05/04/2021 | Content ©www.MilitaryFactory.com | The following text is exclusive to this site.
HMS Roberts (F40) led a successful wartime career encompassing actions in World War 2 (1939-1945). She saw her keel laid down on April 30th, 1940 by John Brown & Company of Clydebank, was launched about a year later, and then saw commissioning quickly on October 27th, 1941 during a time when the Royal Navy required all manner of warship. The ship existed as the lead of the Roberts-class monitors - a breed of slow, compact warships fielding a "big gun" armament. The class included only HMS Abercrombie (F109) who also managed to survive the war in full.

Key to the design of HMS Roberts was its 2 x 15" /42 Mk 1 main guns which were set as twin-gun installations across a single primary turret. The turret itself held a history of its own for it was taken from HMS Marshall Soult, a Marshal Ney-class monitor which saw combat service in World War 1 (1914-1918). The main guns allowed for good penetration at range and were a proven commodity for the Royal Navy. To this was added 8 x 4" Anti-Aircraft guns as four twin-gunned turrets to protect the vessel from incoming aerial threats. AA defense was further augmented by way of 16 x 2-pounder cannons as well as 20 x 20mm AA cannons fitted about the decks of the ship.

Speed was not a key quality of the design and its propulsion system was made up of 2 x boilers feeding 2 x Parsons steam turbines. These drove 2 x shafts with an output of 4,800 horsepower. Maximum speed reached just 12.5 knots in ideal conditions.

Another lesser quality of the design was armor protection which tended to weigh down the larger capital ships. HMS Roberts needed to squeeze every knot from her arrangement and armor was left as minimal as possible for the role - 13" at the turret, 8 inches at the barbettes and up to 5 inches at the belt.

As built, HMS Roberts exhibited a rather unconventional profile for she fitted her main gun armament in a single turret which was noticeably elevated aft of the bow. Beyond this, there was no other major turret emplacement and this gave the profile something of an uneven appearance. The bridge superstructure was set amidships without the usual bulk around her base as seen in other warships of the period - the bridge structure jutting up as if a tower all her own. A single smoke funnel was found aft of the superstructure and the stern was covered over in various installations (including a mast), structures and armament. She fielded a full complement of 350 men and her displacement was 8,100 tons (short) with dimensions including a length of 373 feet, 89 feet, 9 inches, and a draught of 11 feet.

HMS Roberts was pressed into action for several of the main Allied amphibious operations against Axis forces including the landings in North Africa through Operation Torch (November 1942). During this work, she took on damage when a pair of bombs rocked her in an attack - though she survived and was repaired. From there, she was called on to participate in the Allied landings at Sicily through Operation Husky (August 1943) - setting a foothold in the march to Rome. Then came the landings at Salerno in Operation Avalanche (September 1943) and the famous D-Day landings (June 1944) of Northern France firing salvos against Sword Beach in preparation for the landing assault. Sword Beach was taken by a combined British-French force.

Surviving the entirety of the war, the vessel was eventually decommissioned and sold for scrapping after being stripped of all of her useful components. The British Navy held little interest in a 1940s-era monitor and many-a-ship held the same fate in the massive post-war drawdown. She was scrapped in 1965 after a notable career - though one of her 15" guns was salvaged and presented at the Imperial War Museum (Lambeth) in London as a permanent showpiece.