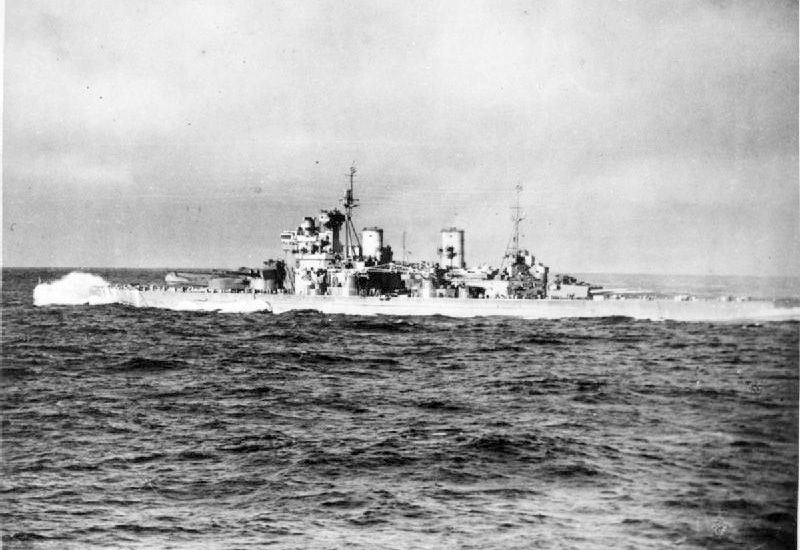 HMS Prince of Wales was part of the force credited with sinking the German battleship KMS Scharnhorst during actions in World War 2.

Authored By: Staff Writer | Last Edited: 08/14/2017 | Content ©www.MilitaryFactory.com; the following text is exclusive to this site.
The King George V-class of battleships proved an important cog in the British war machine of World War 2. Making up the group were HMS King George V (41), HMS Prince of Wales (53), HMS Duke of York (17), HMS Anson (79), and HMS Howe (32) and these represented some of the latest ships in the British fleet. Of the five ships commissioned only a single one lost during the war (HMS Prince of Wales, air attack in the South China Sea during December 1941).

HMS Duke of York was ordered on November 16th, 1936 and saw her keel laid down by builder John Brown & Company at Clydebank, Scotland (Yard No. 554) on May 5th, 1937. She was launched on February 28th, 1940 and commissioned on November 4th, 1941. With World War 2 officially beginning in September of 1939, Britain and her allies had been at war for some time before the arrival of HMS Duke of York in 1941 - making her an ultra-important addition to British naval actions moving forward.

The vessel displaced 42,075 tons (long) and showcased a length of 745 feet, a beam of 103 feet, and a draught of 34.3 feet. Her machinery included 8 x Admiralty boilers feeding 4 x Parsons geared turbines generating 110,000 horsepower to 4 x shafts. The warship could make headway at 28 knots out to ranges of 18,000 miles. The ship's profile included two smoke funnels book-ending the gap at midships. The bridge was fitted ahead of the foremost funnel and the second funnel was attached to the aft superstructure.
HMS Duke of York fitted various radar equipment before the end of her career including Type 281 air and Type 273 surface warning radars in addition to the Type 284, Type 285, and Type 282 gunnery ranging sets for her various armament installations. Her armament was led by 10 x 14" (360mm) BL Mk VII main guns fitted across 3 x multi-gunned primary turrets - two turrets mounted fore (one twin-gunned, the other quadruple-gunned) and one (quadruple-gunned) aft of the bridge. 16 x 5.25" (133mm) QF Mk I Dual-Purpose (DP) guns were used to engage both surface warships as well as to bombard land-based targets during amphibious support actions. Some 48 x 2-pounder (40mm) QF Mk VIII guns served as the primary Anti-Aircraft (AA) coverage while these were supported by 6 x 20mm Oerlikon AA guns (her original AA protection scheme was improved before the end of the war).

Armor protection for the warship included 14.7" at the main belt with 5.4" used along the lower belt region. The decks were covered in up to 6" of armor and the main turrets up to nearly 13". The barbettes equaled this and bulkheads totaled 12" of protection. The conning tower showcased up to 4" of armor.

By the end of the war in 1945 the vessel held space for a crew numbering over 1,550 personnel. The aforementioned double-ended catapult fitted at midships used to launch a Supermarine Walrus reconnaissance seaplanes (of which up to four could be carried) was lost in early 1944. Recovery of these aircraft was by way of a crane element also at midships.

One of HMS Duke of York's first commitments was in delivering Winston Churchill to Maryland for a meeting with American President Franklin D. Roosevelt after the Japanese attack on Pearl Harbor in December of 1941. Her "shakedown" cruise the followed and she ended at Scapa Flow by way of Bermuda in mid-January 1942. From there, the vessel supported Allied convoys before forming up part of Force H at Gibraltar in October of 1942. Her guns were used against enemy positions during the Allied invasion of North Africa during "Operation Torch". A refitting then followed in home waters. Reinstated in May of 1943, she supported "Operation Gearbox" during June and then participated in the Allied invasion of Sicily through "Operation Husky" (July-August 1943). Raids in Norwegian waters were then next on the agenda.

The Battle of North Cape took place on December 26th, 1943 off the coast of Norway between a combined British-Norwegian force against the German battleship Scharnhorst. The battle resulted in the sinking of the German battleship with 1,932 killed in the action. This event marked the last engagement between British and German capital ships and reduced the German threat in British-Norwegian waters. HMS Duke of York then supported the air attack missions attempting to sink the German battleship Tirpitz though these hunts proved unsuccessful in their primary goal. The vessel then went into harbor and received an overhaul beginning in September of 1944 resulting in her receiving more radar equipment and improved anti-aircraft facilities.

With the war in Europe winding down throughout the spring of 1946, HMS Duke of York was ordered to form up with the British Pacific Fleet to continue service in the remaining fight against the Japanese. She reached Sydney, Australia in late July, delayed by electrical issues which forced a stop in Malta though the Japanese capitulated in mid-August and marked the formal end of World War 2. HMS Duke of York was only able to participate in a few air raids by providing protection to Allied carriers before the surrender. She then took part in the Allied presence in Tokyo Bay before returning home after a stop in Hong Kong. She returned to home waters in June of 1946 and her post-war career continued into April 1949. She was pulled from service in November of 1951, her name was struck on May 18th, 1957, and her hulk sold off for scrap shortly thereafter.

(Not all weapon types may be represented in the showcase above)
4 x Supermarine Walrus floatplane aircraft (catapult gear removed in early 1944).