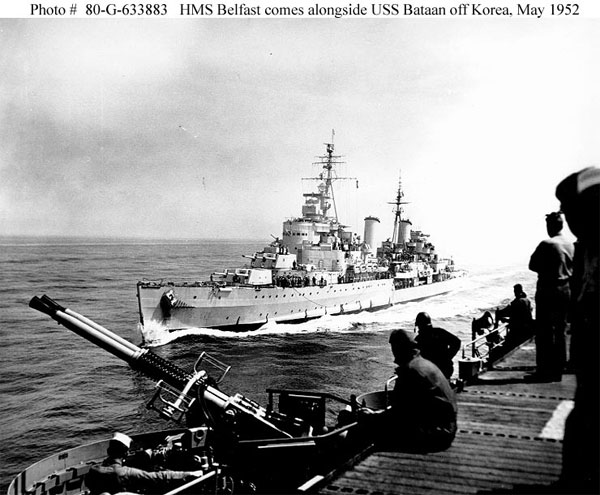 HMS Belfast served throughout the Second World War and on into Korea, later becoming a floating museum on the River Thames.

Due to Germany rearming in the 1930's Britain began to increase ships in her steel fortress. HMS Belfast and her sister ship Edinburgh were the Town class cruisers commissioned before the start of World War II. The Town Class ships were constructed less than 10,000 tons due to the guidelines of the Washington Naval Treaty which limited the size and number of ships built after WWI. Belfast's main armament was 12 x 6 inch guns mounted 6 forward and 6 aft that with a broad side could send 12 x 112 lb armor piercing shells 14 miles towards the target. With a speed of 32 kph and 4 inch armor she was a tiger ready to go in harm's way.

Each 6 inch gun turret was manned by 26 men. Under each 175 ton turret was a barbet that went down 7 decks connecting the powder magazine and shell magazine. A moving vertical hoist belt carried the cordite powder charges and high explosive shells from the bottom of the ship to each of the 12 x 6 inch guns. As on HMS Victory each cannon had a gun crew, Belfast 6 inch guns required a 7 man crew to fire the weapon. The crew practiced over and over until the entire loading sequence would take only 8 seconds. Each man had a job:

At the start of the war she was assigned to the 18th Cruiser Squadron whose assignment was to impress a naval blockade on Germany. On November 21, 1939 Belfast left the estuary or firth of Scotland's River Forth, where it flows into the North Sea between Fife to the north locally called the Firth of Forth. As she entered the North Sea she hit a magnetic mine laid by the German submarine U-21. No one was killed but 21 sailors were injured breaking the keel and damaging to the hull to such an extent the repairs took three years at the Devonport repair dock.

The damage was so severe the Admiralty considered scrapping her but Churchill interceded. During the hull refit technological improvements were added above the water line, the beam was increased which improved her stability. The latest radar was also added and it was connected to the fire control system, this upgrade made her one of the most advanced cruisers in the war. This refit had increased her tonnage to 11,533 standard tons making her Britain's heaviest cruiser. With the upgrades it made the Belfast the choice of the 10 Squadron Commander Rear-Admiral Robert Burnett to make her the flagship.

10 Squadron was assigned to Aortic convoy duty from the United Kingdom and the United States to the northern ports of the Soviet Union, Archangel and Murmansk. There were 78 convoys between August 1941 and May 1945. About 1400 merchant ships delivered vital supplies to the Soviet Union under the Lend-Lease program. During the war 85 merchant vessels and 16 Royal Navy warships were sunk. The Germans lost a number of vessels including one battle cruiser, three destroyers and at least 30 U boats and a large number of aircraft. The Northern Atlantic is a force onto itself and cared not which navy the ship was from. The winter ice would build up on the ships and had to be chopped away or the buildup could affect the weight stability of the ship. At times a German U boat would run parallel to an allied ship because the seas were too high to make an attack. First and foremost was the need for self preservation. The major concern to 10 Squadron was the Battlecruiser Scharnhorst stationed in Norway. She would come out with a screen of destroyers and attack convoys with her long range 28 cm 11 inch guns that could destroy an entire convoy by herself.

The Admiralty having the German Naval code devised a plan to lure Scharnhorst into a trap, Force I was the three cruisers HMS Belfast, HMS Norfolk and HMS Sheffield which would sail and shadow the convoy. Force II would be the British battleship HMS Duke of York and her screen, the cruiser HMS Jamaica, and the S class destroyers HMS Savage, Scorpion, Saumarez, Sword and HNoMS Stord of the Royal Norwegian Navy. If Scharnhorst and her destroyers took the bait and attacked the convoy, Force I would attack and hold while Force II moved in for the kill. Operation Ostfront was the German Kriegsmarine operation to intercept the Russian bound Arctic convoy JW 55B. The convoy, sighted three days before by a Luftwaffe aircraft, consisted of nineteen cargo vessels, escorted by the destroyers HMS Onslow, HMS Onslaught, HMS Orwell, HMS Scourge, HMS Impulsive, HMCS Haida, HMCS Huron, and HMCS Iroquois, and the minesweeper HMS Gleaner. Force I had not been sighted. Also as part of the Admiralty plan to draw out Scharnhorst in the area was convoy RA 55A, returning to the United Kingdom from Russia. RA 55A consisted of 22 cargo ships, escorted by the destroyers HMS Musketeer, Opportune, Virago, Matchless, Milne, Meteor and Ashanti, HMCS Athabascan, and the minesweeper HMS Seagull.
Advertisements

On December 25th, 1943 Scharnhorst, with her Narvik-class destroyer screen consisting of the Z29, Z30, Z33, Z34, and Z38, sailed from Norway's Alta Fjord to attack the merging two convoys. Unknown to the Germans was the presence of Force I & II. Not factored in the trap was that Duke of York was 4 kph slower than Scharnhorst and when speed matters this was to play a role. With poor weather Admiral Bey had detached his destroyers from Scharnhorst trying to pick up the convoys. Before dawn on December 26th, HMS Belfast's radar picked up the Scharnhorst and her screen at a range of 35,000 yards. She went to action stations and notified the balance of the cruisers in Force I and kept the Duke of York informed.

At 13,000 yards Scharnhorst now alone had not picked up Force I and Belfast and the other cruisers opened fire, the Battle of North Cape began. Scharnhorst surprised opened up with salvos against Belfast and Force I with no hits however Scharnhorst was hit twice with a lucky shot knocking out her radar tower and control. The weather had worsened with a raging snow storm which left Scharnhorst blind with the encroaching Force I led by the Belfast radar. Scharnhorst had to revert to the age old "fire at the muzzle flashes" and guess the range. Norfolk still used the older powder where Belfast and Sheffield were using a flash less cordite leaving Norfolk as the primary target. Scharnhorst felt she had been attacked by a battleship turned and fled towards Norway. The plan was working as Duke of York and her screen closed while Scharnhorst steamed at flank speed south. Sheffield and Norfolk dropped back with operational problems while Belfast pressed on with her radar looking for the battle cruiser. Scharnhorst was still unaware of the Duke of York, Force II forged ahead picking up the German and maneuvered to bring her 10 x 14 inch guns to bear. Belfast arrived and lit up Scharnhorst with a star shell at less than 12,000 yards, Duke of York had Scharnhorst in her sights fired a broadside hitting Scharnhorst with at least two 14 inch shells. Scharnhorst turned north but was engaged by the cruisers Norfolk and Belfast, and so turned east at a high speed of 31 knots. Duke of York turned for the chase but started to drop back due to a small but important 4 kph disadvantage in speed. Duke of York new the German would escape so at extreme range she scored a hit that damaged the number one boiler room forcing the battle cruiser to reduce speed. The British destroyers caught up and pressed torpedo attacks against Scharnhorst. The destroyers scored three torpedo hits but the battle cruiser still maintained a speed of 22 knots. Belfast was firing from the north while Duke of York and the cruiser Jamaica fired from the south raining shells down on Scharnhorst while her speed continued to slow. The British destroyers closed and fired 19 torpedoes with many hits. Scharnhorst finally capsized and sank at 19:45 hours on December 26th, while her propellers still turned. The ship's crew was 1,968 and the Admiralty sent a message to "take a small sample" so only 36 men were pulled from the water and saved by British ships.

HMS Belfast had shown that radar was the way of the future and fought in the last great gun battle in naval history. She continued to serve and took part in the D Day landings on 6/06/44 as a gun platform firing some say the opening salvoes on Gold and Juno beaches. For the next five weeks she fired thousands of rounds at German positions in her 14 mile range. Her last round in WW2 was fired on 7/08/44 in the battle of Caen. She returned to Devonport England for a needed refit, she had worn out her guns. After needed repairs she sailed for Malaya to support expending the Japanese from the island but did not fire a shot due to the Japanese surrender. She returned to Britain for a major refit.

Belfast served in the Korean War while supporting United Nations land forces by naval bombardment. In July 1952 she was hit by a Communist battery, killing one and wounding four. She was stationed on the west coast using her 6 inch guns against the North Korean forces. Belfast was modernized between January 1956 and May 1959 with new AA guns, new NBC Warfare Bridge that resembled the new Tiger cruisers. Between 1959-62 the ship operated in the Far East on exercises and "showed the British flag" and returned to Belfast for the last time on August 24, 1963. She remained in dock and was transferred to become a museum ship on March 1, 1978.

(Not all weapon types may be represented in the showcase above)
2 x Supermarine Walrus single-engine amphibious reconnaissance biplane aircraft - removed in the later years of World War 2.