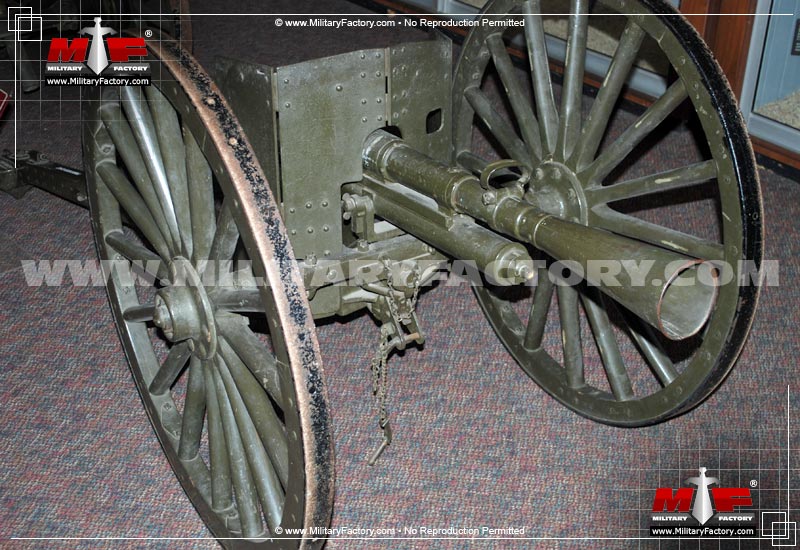 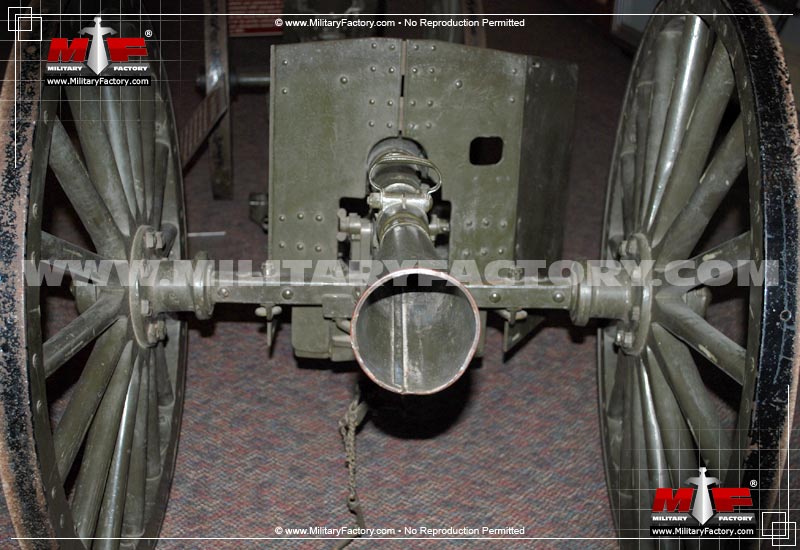 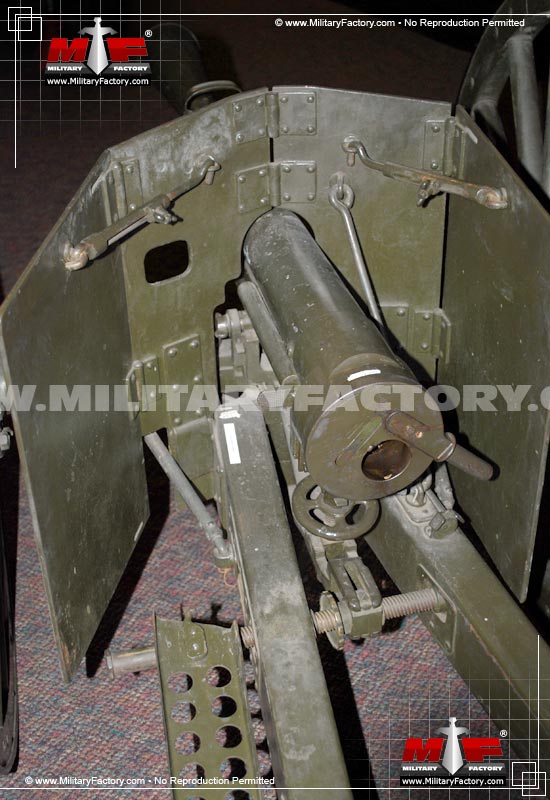 In 1916, with World War 1 (1914-1918) in full swing, French factories began production of a new weapon designated "Canon d'Infanterie de 37 Modele 1916 TRP". Its design was centered on providing heavy-caliber fire support at the infantry level, being man-portable to an extent and relying on a 37x94Rmm (1.45") projectile. The system consisted of the gun tube itself, as well as a recoil device, and could be mounted atop a fixed tripod assembly or a two-wheeled carriage. A gun shield near the body was optional as was a conical flash suppressor at the muzzle. An APX telescopic sight was used for accurized fire at range and an inherent rapid-firing action was built into the operation of the weapon (hence the "TRP" portion of the designation: "Tir Rapide, Puteaux").

it was once believed by many that the war would be over by Christmas of 1914 but this soon proved disastrously false as the once-fluid war bogged down into a system of trenches - creating the bloodbath that was "trench warfare". Beyond artillery, one of the key battlefield weapons providing the carnage for both sides was the machine gun which had finally come into its own concerning modern warfare. Kill zones were arranged by the defenders intent on stopping any cavalry and infantry charge attempting to overtake key positions and the machine gun accounted for hundreds of thousands of deaths in the conflict which led to measures taken directly against the weapon - which was typically seated in well-protected positions from enemy fire.

The Modele 1916 TRP was developed as such a counter, its design attributed to Atelier de Puteaux. It was thought that giving infantry a potent, ranged weapon could help unseat the defenders and clear a way for the advancing infantry lines. Additionally, the weapon could be used against other fortified positions along trenches and help to clear out messes of barbed wire.
Advertisements

Relatively transportable, the gun could be moved in three major components and reassembled for fighting elsewhere. A two-wheeled carried aided in this action but the weapon could just as easily be carried by several troops (it took four to six personnel to operate the weapon effectively). A High-Explosive (HE) projectile made up the primary 37mm ammunition fired by the Modele 1916 TRP and this held enough of a "punch" to remain an effective measure for the duration of the war.

Overall, the system weighed 238lb when ready-to-fire and 354lb when arranged for transport. Its barrel measured 2.4 feet long. The mounted hardware gave an inherent elevation span of -8 to +17 degrees and traversal of 35 degrees to either side from centerline. A trained, experienced gunnery crew could hope to reach a sustained fire rate of 25 rounds per minute. Muzzle velocity of the outgoing shell measured 1,200 feet per second and effective firing ranges reached out to 1,600 yards (2,600 yards was the listed maximum range).

Beyond its service as an infantry support gun, the weapon was found fit for aerial service and mounted on a few select aircraft of the war including the Beardmore WBV series. The SPAD S.XII fighter used by French Ace Rene Fonck carried a Modele 1916 TRP as part of its armament.

The French Army continued to keep the Modele 1916 TRP in service even into the 1940s where they played a secondary role to primary French anti-tank weapons - mainly due to supply issues. The stock was large enough that the conquering Germans took it on and assigned the designation of "3.7cm IG 152(f)" to it. Captured French ammunition was known as "Sprgr 147(f)".

In U.S. Army service during World War 1, the Modele 1916 TRP was taken on as the "37mm M1916" Similarly these were in circulation until the start of World War 2 to which the stock was either relegated to other useful secondary tasks or kept in storage. A small number were in play during the war itself as direct-combat weapons, primarily in the early phases of the Philippines Campaign when the Allies ran in to supply shortages and were forced to rely on the outdated design.

The Modele 1916 TRP was eventually used by the forces of France, the United States, Poland and Italy. The Japanese Army copied the gun as the "Type 11" and operated these from 1922 until 1945. The French design saw service through both World Wars but became a largely forgotten contributor to both causes over time. Nevertheless, it was an effective battlefield piece worthy of mention and one of the many French-originated artillery systems to come out of the fighting.