The Marmon-Herrington Armored Car of 1940 was adopted by several Allied participants of World War 2 - the line also saw service thereafter. 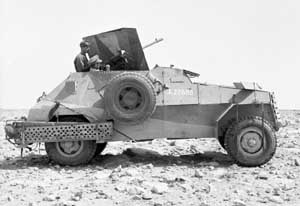 The Marmon-Herrington Armored Car became a rare South African industry contribution to the Allied cause in World War 2 (1939-1945). Interestingly local industry lacked the capabilities to produce such a vehicle before the fighting started but, when push came to shove, the country responded with a serviceable system that was adopted by the British Army and others during the course of its service career. Development began in 1938 at the behest of the South African government and, with the formal arrival of the war, the armored car came in high demand. Some 5,746 examples of this useful armored car were produced during the span of 1940 to 1944 and the line saw combat service from the fighting of World War 2 to the 1948 Arab-Israeli War. The British Army knew the vehicle as the "Armoured Car, Marmon-Herrington Mk II".

Because of local limitations, the design began by importation of Ford Canada 3-ton trucks. The editing chassis was proven and already a servant of heavy industry while also providing good ground clearance for a military-minded vehicle. A Marmon-Herrington drivetrain was the underlying component of the car and provided the series the general name of "Marmon-Herrington".

There were ultimately two major designs in the Marmon-Herrington family line - a 4x4 wheeled form and a later 8x8 model. Both were products of South Africa and eventually used by the South African Armoured Corps though many global operators ultimately emerged. Specifications for the 4x4 variant included a weight of seven tons (short) with a length of 15 feet, a width of 6 feet and a height of 7 feet. The standard operating crew was four though the vehicle could make do with three. Armor protection reached 20mm thickness which was enough to shield against small arms fire and shell splinters - though the line was by and large lightly armored throughout its career. Primary armament of the model was a QF 2-pounder (40mm) anti-tank gun fitted to a traversing turret while a coaxial .303 machine gun was fitted in the turret. An additional .303 machine was carried in some models elsewhere on the vehicle. Power was from a Ford V8 gasoline-fueled engine of 95 horsepower which provided the car a maximum road speed of 50 miles per hour with operational ranges out to 200 miles. Suspension was across all four wheels. The hull contained a double-rear door arrangement that was eventually dropped from the Mk III onwards.

The Marmon-Herrington series saw its first actions in the North Africa campaign where it proved itself reliable on the whole despite the unforgiving environment. Many were eventually modified in-the-field to suit the need and this included installation of various weaponry including captured enemy systems (this sometimes forced the removal of the entire turret structure). The vehicle's contribution also went beyond the typical armed forms for several battlefield-specific gun-less models were also generated on a need basis for lack of better alternatives on the front. The cars also made their way to the fighting of the Asia-Pacific region. By 1944, the line was more or less in reduced need as the fighting now relocated away from the wide open spaces of Africa to the mountainous terrain of the Italian peninsula - rendering designs like the Marmon-Herrington to other more forgiving fronts or to be replaced altogether with more capable types.

There were eight primary marks in the Marmon-Herrington line beginning with the Mark I of 1940 ("South African Reconnaissance Vehicle Mk I"). These featured solely a two-wheel drive drivetrain and were outfitted with a pair of .303 Vickers machine guns - one in the turret and one in the left-rear of the hull. Production resulted in 113 total units and these saw combat actions against the Italians in East Africa. Thereafter, they were relegated to training as the more effective Mk II took hold.
Advertisements

The Mark II of 1941 ("South African Reconnaissance Vehicle M II") appeared with a lengthened chassis for better ground contacting and was given an all-wheel drive capability for much-improved cross-country performance. While early forms mimicked the same armament scheme and riveted hull construction as found in the Mark I, later vehicles arrived with all-new turrets (octagonal in their appearance) armed with a 0.55 Boys anti-tank rifle and BREN machine gun as well as welded hull plates for better survivability. Total Mark II production yielded 887 vehicles.

In 1941, a new version also appeared in the Mark III. The wheelbase was reduced and production was quite notable through 2,630 units realized - making this the definitive model form in the series. The Mark IIIA followed and saw its turret removed to fit a simplified shielded machine gun ring for up to 2 x machine guns.

The Mark IV of 1943 saw the original design revised externally while, internally, much of the original running gear was retained. A new, two-man turret was added that fitted the QF 2-pounder main gun to provide better support against light armored vehicles in the field beyond what the traditional machine gun fits offered. A coaxial machine gun was eventually fitted in later production models while a roof-mounted machine gun was also added on a pintle mounting to provide effective local air defense. A conversion kit was developed to help bring earlier marks up to the Mark IV standard but supply could not meet the wartime demand so the Mark IVF was hastily designed in its place which switched use to a Ford Canada F60L 3-ton truck chassis and drivetrain. 1,200 of this model were produced, mainly for the British Army.

The fighting forces of South Africa attempted to formulate their own design through the Mark V initiative of 1942 - developed in direct response to the German Schwerer "Panzerspahwagen", an 8x8 wheeled armored car powered by an 8-cylinder gasoline-fueled engine and armed with a 20mm KwK 30 series turreted main gun (with coaxial MG34 machine gun armament). The South African response was similar in that it used eight wheels across four suspended axles and power was through a paired Albion 6-cylinder engine set with drive power to the center two axles. Primary armament was to become useful QF 6-pounder (57mm) main gun though testing proved the vehicle was not up to the rigors of wartime service. This initiative was abandoned after the sole prototype as attention shifted to a new approach.

The South African Mark VI followed in 1943 and revised the earlier Mark V approach by pairing two Mercury 8-cylinder engines and drive power was now to all eight wheels with steering given to the front and rear axle sets. Trialed armament included both a 2-pounder and 6-pounder main gun fitting to a three-man, power-assisted turret. The vehicle would be locally-defended by up to three .303 machine guns. Despite the improved form and function, the vehicle failed impress British authorities due to unreliability and was not pursued beyond two prototypes.

This laboring paved the way for the Mark VII to emerge - essentially offered an improved version of the earlier Mark IIIA. However, this program met the fate of the earlier 8x8 wheeled marks and was cancelled while in the pilot stage - armament was to be just a single machine gun fitting. Similarly, the final Mark VIII failed to impress as it could not fit anything larger than the 2-pounder main gun in the turret being offered.

The last recorded use of Marmon-Herrington armored cars was in the 1990s by Greek forces.
Advertisements

(Not all weapon types may be represented in the showcase above)
2,000 x 0.30 caliber ammunition (estimated)
2 x Smoke grenades 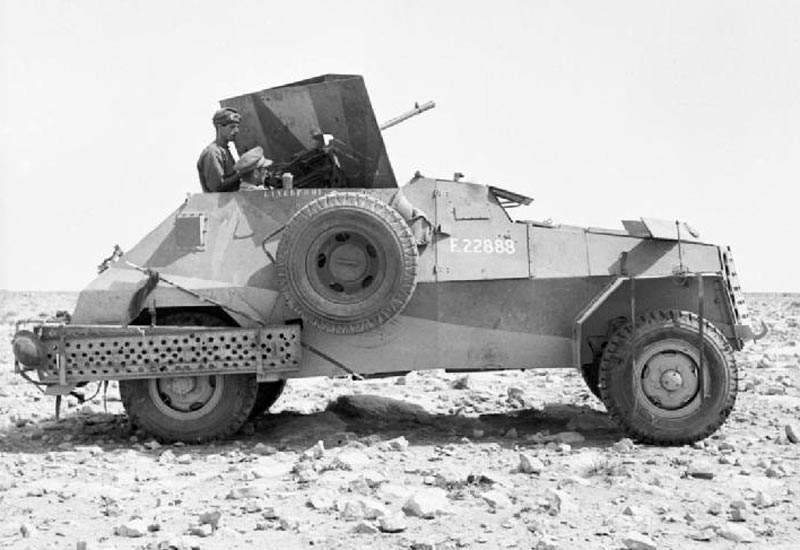 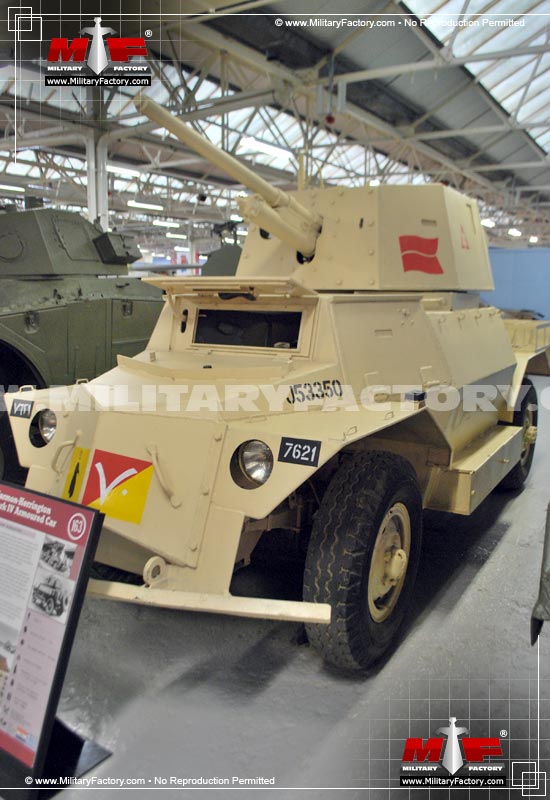 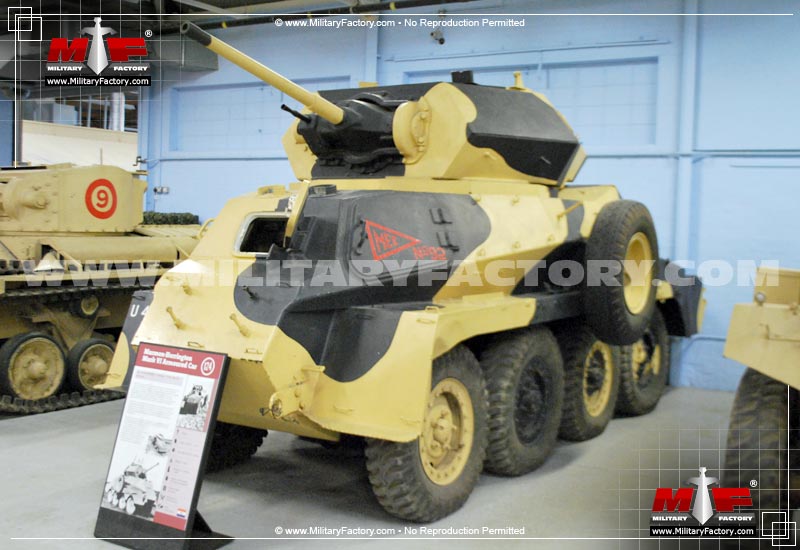 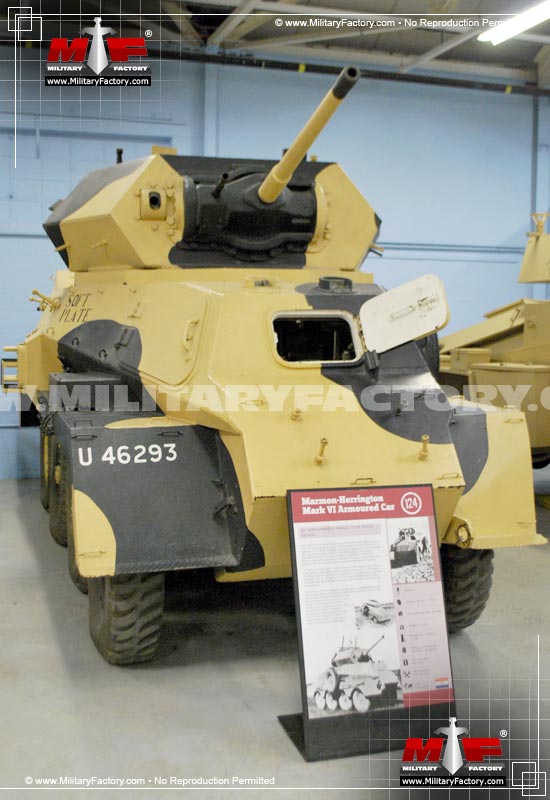