The Soviet 203mm Model 1931 howitzer proved unique in its use of a tracked carriage for short-range mobility. 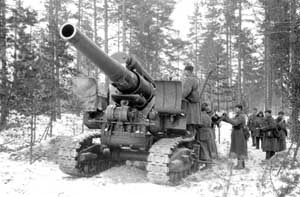 The Soviet Army of World War 2 showcased a variety of large-caliber, heavy field guns during its march on Berlin. The most potent of these became the "203mm Howitzer Model 1931", also known as the "B-4" or, simply, the "M1931". The B-4 was unique amongst the many artillery systems fielded in the conflict due to its use of a self-propelled carriage arrangement featuring tank-style tracks. The weapon system began design work in 1931 and entered production in 1932 with some 871 units completed. Modifications were made up to 1990. The heavy weapon proved a critical component of the Soviet advance into Berlin where its massive 203mm shell pulverized German defensive positions - sometimes at extreme close range.

The B-4 was born from the interwar Soviet industrialization that focused heavily on agricultural vehicles to work the far-reaching Soviet landscape. As such, tractor tracks became a familiar and commonplace component in the Soviet inventory leading up to World War 2. When it came time to design a new 203mm caliber system, the weapon was sat upon a tractor carriage which allowed for limited, self-propelled cross-country traverse. The track component featured a rear drive sprocket with a front-mount track idler and two track return rollers while four road wheels aided the tracks along the ground. The carriage also contained the elevation and traverse functions for the gun tube as well as the recoil mechanism. Its breech was managed through an interrupted screw design. Elevation was limited to a span of 0- and 60-degrees while traversal was just 8-degrees from center. The massive, 220lb shells allowed for a rate of fire of one round per minute - an integral crane aided in maneuvering the shell into place. Muzzle velocity was 1,990 feet per second with a maximum firing range out to 11 miles. The completed weapon's weight was 39,000lb.

Tactically, there was no argument about the 203mm gun's lethality. It was in the overall heavy nature of the B-4 that limited the system - particularly when on-the-move. While it could make its own way as a self-propelled system, this was only over short distances - at about 9 miles per hour on roads. It could be broken down into two smaller (yet still heavy components) for quick transport but the ideal way of moving the system was in its breaking down into six still-smaller components - which was a time consuming and complicated process requiring much manpower and vehicular assistance. Its rate-of-fire was also quite paltry which required whole batteries to maintain an effective suppression phase. Its cumbersome nature also left something to be desired.

Examples were known to have fallen to the Germans as Soviet crews simply had to leave their heavy undefended guns behind when positions were overrun. The Germans were all too happy to reconstitute these weapons and use them against their former owners. Captured forms were designated in the German Army inventory as "20.3cm H 503(r)" and were used along the East Front as well as in the French and Italian Campaigns following the Allied invasions. The Germans knew the weapon as "Stalin's Sledgehammer". Many were out of service by 1944 due to lack of ammunition, general battlefield wear, or combat attrition.

The B-4 was used to good effect when it could be implemented on controlled battlefields for mobile fronts did not play up to the weapon's strong points. However, when stationary and not under threat, the 203mm was a tremendous "bunker-buster" weapon. The High-Explosive (HE) shell could also rain down on unfortunate concentrations of enemy troops as the B-4 was often used to soften up key positions prior to an all-out assault by Soviet armor. Coupled with use of heavy rocket artillery and other indirect-fire gun types, the Soviet Army could lay waste to enemy-held urban environments before attempting entry - German fortifications could simply be crushed indirectly rather than engaged directly with heavy losses of man and machine. The Battle of Berlin saw B-4s deployed along with regular forces to help ease the bloody advance - and the weapons held a terrible effect on the awaiting enemy forces still loyal to The Reich.

There proved a few variants of the B-4 line and all retained the same general form and function of the weapon as designed. The B-4M introduced a four-wheeled carriage and marked one of the major variants of the line - the other being the original B-4. The B-4 was the 20.3cm H 503/1(r) in German service and the B-4M was the 20.3cm H 503/2(r). Some 27 of both types were claimed by the Germans at the fighting in Dubno during June 1941.

Its numbers ensured that the B-4 was still in service during the post-War years and into the Cold War era though it only saw export to ally Cuba. More modern forms lost their rather novel track assemblies to become traditional artillery systems while retaining their overall firepower. The B-4 saw more production than any other heavy artillery weapon of the war for the Soviets.
Advertisements

(Not all weapon types may be represented in the showcase above)
Dependent upon ammunition carrier. General High-Explosive (HE) shell used. 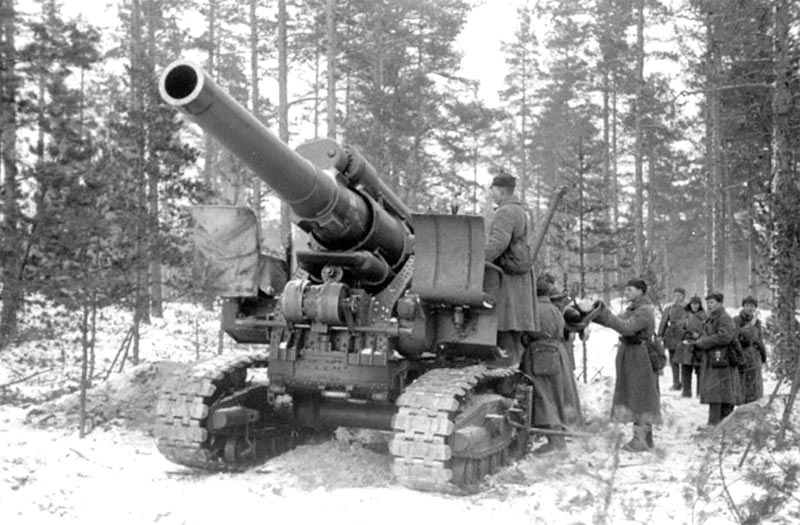