The Rapid Deployment Force / Light Tank concept was developed by AAI Corportation for possible consideration for a new US Army light tank specification.

Authored By: Staff Writer | Last Edited: 03/24/2022 | Content ©www.MilitaryFactory.com | The following text is exclusive to this site. 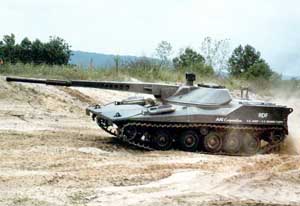 In 1980, the Soviet Empire still remained the enemy of the day for America and her allies. As such, World War 3 would most likely focus in Europe and, like World War 2, rely heavily on mass armor formations fighting for control of key positions. Despite the advent of nuclear weapons, it would most likely remain a conventional war fought with conventional equipment utilizing the latest in technologies. One key ingredient in such a conflict would be rapid response and fluid mobility of forward operating forces and, to this end, the US Army sought to field a lightweight tank that was air-transportable and made ready within minutes of disembarking. This gave rise to the Rapid Deployment Force/Light Tank (RDF/LT) specification requirement of 1980.

In response, AAI Corporation began private development of a light tank hopeful of US Army interest. The initial 14.5-ton (Short) pilot vehicle was given a 76mm main gun in a two-man turret with a complete crew of three - a driver in the front hull and commander and gunner in the compact turret assembly. The main gun sported a double-baffled muzzle brake while 76mm shells were housed at the floor at the front-right of the hull. The engine was situated conventionally at the rear of the design. AAI also developed a modular powerpack arrangement in which repair/replacement could be quickly made through use of extendable rails at the engine compartment - providing the needed access. This prototype was the first of several related prototype vehicles intended for the RDF/LT requirement.

A subsequent prototype featured the all-new, in-house-designed, high-velocity 75mm M32 cannon which utilized "caseless" ammunition along with burst firing. The caseless aspect allowed single-piece ammunition to be used and spent casings could be ejected from the hull to avoid build-up. The burst-firing quality was born of the thinking that the gun would ensure proper penetration of all existing Soviet armor by landing (in succession) five 75mm projectiles in a single area. AAI also promoted the M32 as a dual-purpose gun in that, when elevated, the system could be used to counter low-flying aircraft as in a self-propelled Anti-Aircraft (AA) system.

It was this second pilot vehicle that was then evolved to appear in three distinct forms all, centering around the rapid-fire 75mm gun. The first vehicle was crewed by three through a two-man turret while the second broke free of this design initiative and was completed with an unmanned turret, the (now-reduced) crew of two residing in the hull in a side-by-side seating arrangement. Each position was granted an access hatch with accompanying vision blocks. This allowed not only allowed for a lower profile and compact design but also lightened overall weight to an extent. The third proposed firm was similar in most respects to the second with the exception of the twin four-shot Stinger surface-to-air, short-ranged missile systems added to either side of the main gun to further strengthen the tank in the anti-aircraft role.

AAI designed their RDF/LT to compete with the latest light tank offerings and promoted a firing-on-the-move capability, high mobility (with low profile), some amphibious capability and a high velocity main gun firing fin-stabilized projectiles. Additionally, portability was key to the vehicle and two units could be stowed (in tandem) within the fuselage of a single Lockheed C-130H Hercules transport.©MilitaryFactory.com
Advertisements

Outwardly, the RDF/LT featured a very clean, somewhat futuristic design profile for the time. The glacis plate was well-sloped leading up to the two crew hatches at the hull roof. The engine was seated in a rear compartment i the usual way with the turret, managing the main armament, fitted to the middle of the design and rotated about on a circular platform. The main gun overhung the hull and was given an unobstructed, 360-degree firing angle. Running gear included five double-tired road wheels to a track side with the drive sprocket at rear and the track idler at front - the track link system itself borrowed from the M113 Armored Personnel Carrier. A folding support assembly was fitted to the hull front to lock the main gun when in travel configuration.

Internally, the commander and gunner were both afforded an M32 sighting device while the gunner's position also held a laser rangefinder for added precision. A thermal vision sighting component was proposed as optional as was a digital Fire Control System (FCS) utilizing the AN/VSG-2 series sight, the AN/GVS-5 laser rangefinder and a digital ballistics computer. Onboard communications was accomplished through an AN/VRC 43 set while electrical power was served through six coupled 12-volt batteries outputting 24vdc.

Power was to be served through a Detroit Diesel 6V53T turbocharged diesel-fueled engine of 350 horsepower mated to an Allison Cross Drive X-200 transmission. The chassis was suspended atop a torsion bar arrangement for the required cross-country travel. The RDF/LT was listed with a top road speed of 40 miles per hour on ideal surfaces and an operational (cruising) range of 310 miles depending on operating environment. Additionally, the basic hull design could ford up to 40 inches of open water and ground clearance measured a serviceable 20 inches.

Primary armament was the M32 76mm high velocity main gun cleared to fire APFSDS (Armor-Piercing, Fin-Stabilized, Discarding Sabot), HE (High-Explosive) and Smoke rounds from a stable of 50 projectiles held in the forward hull. The turret offered +22 elevation and -10 depression while relying on hydraulic power as standard and manual power for emergency backup. Secondary armament was a 7.62mm M240 coaxial machine gun afforded 2,600 rounds of ammunition which could be used as a fall-back ranging device or against enemy infantry positions.

Despite the impressive scope of the AAI Corporation RDF/LT, the US Army failed to show strong interest in the design principally due to the fact that the Army required its future light tank to field the same standardized main gun then in circulation for logistical friendliness. In this fashion, the new tank would be able to utilized the full stable of existing American tank ordnance available.©MilitaryFactory.com
Note: The above text is EXCLUSIVE to the site www.MilitaryFactory.com. It is the product of many hours of research and work made possible with the help of contributors, veterans, insiders, and topic specialists. If you happen upon this text anywhere else on the internet or in print, please let us know at MilitaryFactory AT gmail DOT com so that we may take appropriate action against the offender / offending site and continue to protect this original work.
Advertisements 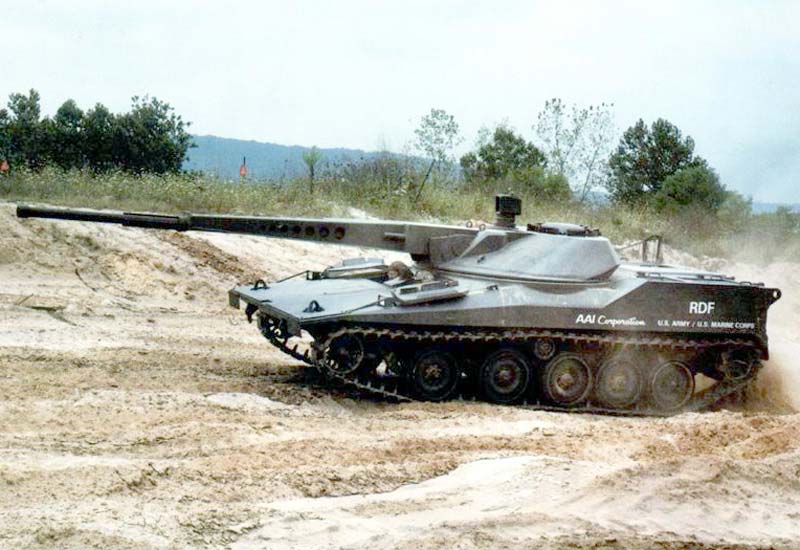