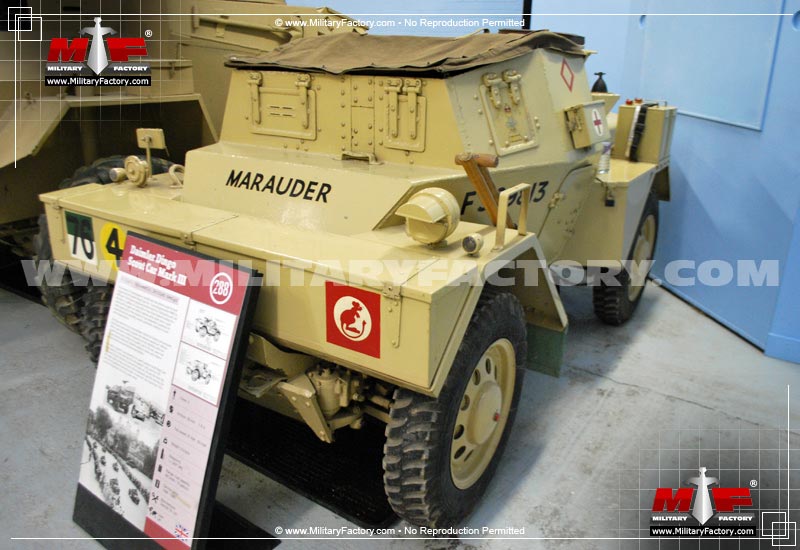 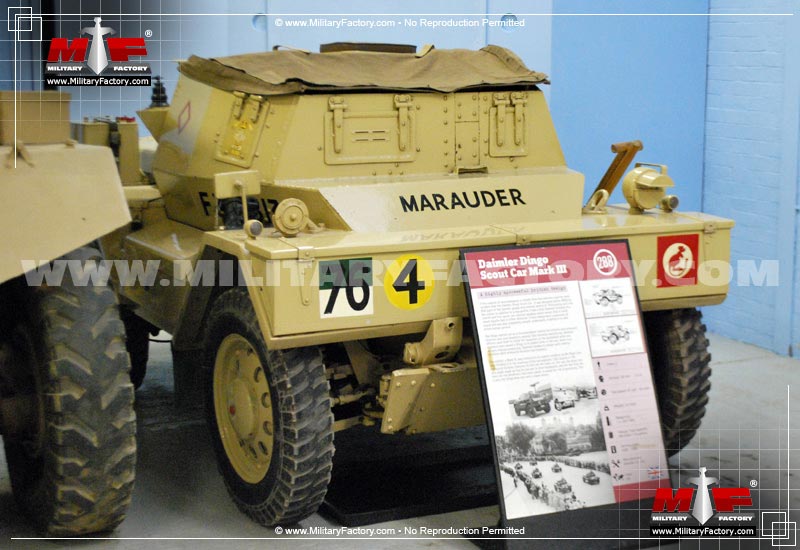 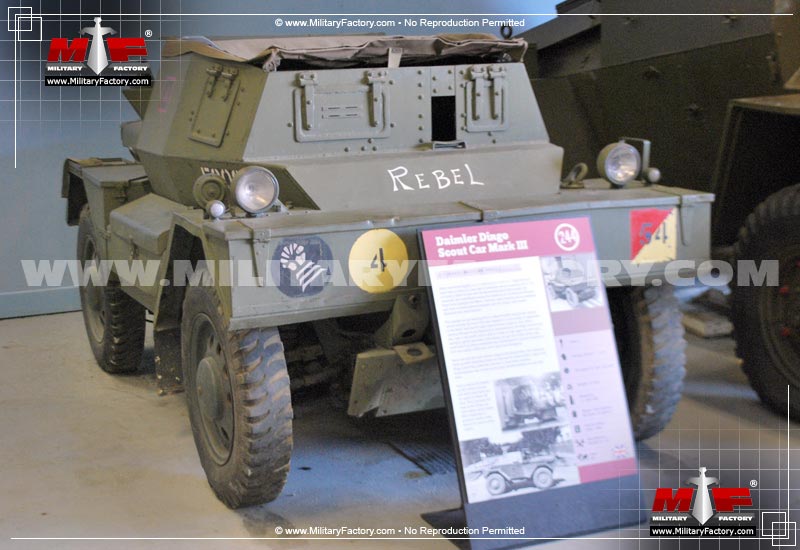 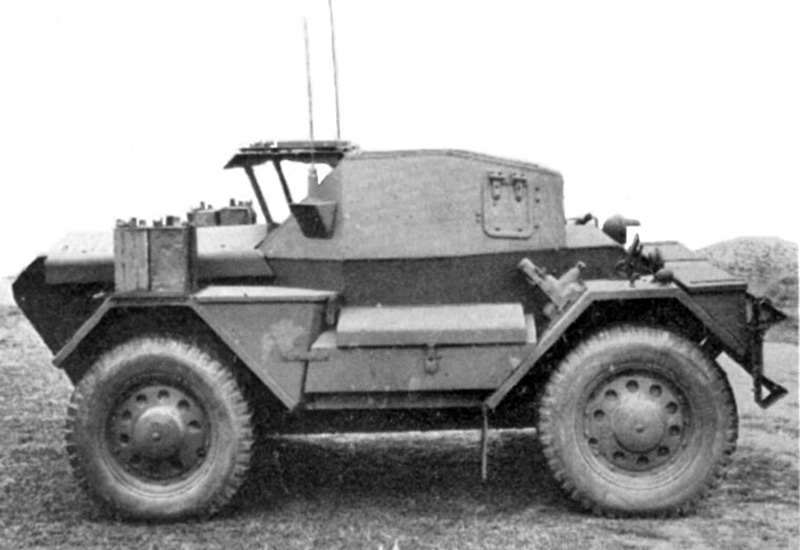 Despite its simple appearance, the Daimler Dingo Armored Car proved a huge success to the British and Commonwealth forces of World War 2.

Authored By: Dan Alex | Last Edited: 03/12/2019 | Content ©www.MilitaryFactory.com; the following text is exclusive to this site.
In studies of World War 2 armored vehicles, it becomes for the reader to overlook the small, compact, lightly armed and armored systems that had tremendous use and impact in the global war. One such example is the seemingly forgettable "Dingo" armored car designed by Birmingham Small Arms Company (BSA) and produced by Daimler. The Dingo, a 4-wheeled, all-terrain vehicle came about in a 1938 British Was Office requirement seeking a new lightweight scout car. While three prototypes were developed by Alvis, BSA and Morris, the BSA design was selected ahead of all others as the "Car, Scout" Mark I" The popular nickname of "Dingo" was actually the name of the Alvis pilot vehicle submission and became attached to the BSA/Daimler offering over time, giving rise to the "Daimler Dingo" of World War 2 history.

The pilot vehicle as submitted by BSA was slightly reworked to British Army requirements after testing, This included improved armoring and overhead covering for the two crew which required installation of a more powerful engine to compensate on the weight gains. While BSA was responsible for the Mark I's general design, it fell to its automobile manufacturing line under Daimler to see serial production through. This is Daimler's relation to BSA to which BSA was primarily recognized for its small arms, bicycle and motorcycle commitments.

Design of the Mark I was rather basic with four "run-flat" rubber tires set at each corner of the Daimler chassis. The chassis itself was fully-suspended with an independently sprung coil spring system used and each wheel fully driven (the front and rear axles both being steerable in the Mark I production line). The vehicle weighed a manageable 3.14 tons (Short) and featured a running length of 10 feet, 5 inches, a width of 5 feet, 7.5 inches and a height of 4 feet, 11 inches. With these dimensions, there proved internal room for only two crew as well as the required engine/transmission portions and fuel stores. The transmission allowed for five forward and five reverse speeds with an operational range of 200 miles and maximum road speed of 55 miles per hour. Power was served through an in-house Daimler 6-cylinder gasoline engine of 55 horsepower fitted to a rear compartment. Armor protection ranged from 30mm at the frontal facings to 12mm along the sides which provided only basic security against small arms fire and artillery spray. The basic structure atop the chassis was essentially a shallow armored superstructure with an equally-shallow upper structure housing both crew - the driver at right and the commander/gunner at left. Armament was simple with just a .303 BREN Light Machine Gun fitted though this could be replaced with a .55in Boys Anti-Tank Rifle as well and augmented by personal weapons carried by the crew (such as pistols or submachine guns). In all, the Mark I promoted a very small target to the enemy and its low silhouette made it hard to detect along the horizon or in thick brush. It also held the operating speeds, agility and protection required of it as a light scout vehicle - including strong off road performance.

The Mark I represented the original production model with all of its four wheels being steerable and a standard sliding roof over the fighting compartment. The Mark 1A followed and remained largely faithful to the original design, differing only in its use of a folding roof. Mark 1Bs were noted for their new grille assemblies and revised engine cooling. These preceded the next major production version known simply as Mark II. These vehicles dropped the four-wheeled steering and limited turning through the front axle only. The upcoming Mark III was produced sans its roof covering to save weight and allow more crew freedom while introducing a new waterproof ignition system.

While formally designated as "Car, Scout, Mark I", the vehicle came to be popularly known by the name of "Dingo". Ironically, this was the name assigned by Alvis to their competing scout cat prototype. The Dingo itself is a wild dog common to Australia and found in regions of Southeast Asia.

Ford Canada of Ontario took on local production of the Dingo to help offset British and Commonwealth requirements during the war and these were formally designated "Car, Scout, Ford Mark I" due to their origin. These came to be popularly known under the nickname of "Lynx". While heavily influenced by the British Dingo in both form and function, the Ford design introduced its own in-house powertrain and suspension system which created a vehicle some 12 inches taller and one less popular than the British design. Production still peaked at 3,255 examples and spanned two primary variants - the Mark I and Mark II (the latter differing in its lack of a roof covering the crew compartment, promoting a new engine grille design and showcasing a reinforced chassis).
Vehicles such as the compact Dingo held a certain battlefield value particularly if utilized in the fast reconnaissance role, generally attempting to avoid direct enemy target especially against heavier armored, and well-armed, vehicles of the enemy. If equipped with a light machine gun, the Dingo crew could defend themselves against enemy infantry or assail unsuspecting, unprotected foes if the opportunity presented itself. If equipped with an anti-tank rifle, the crew had a chance of tangling directly with a light armored vehicle or fortified machine gun/mortar position - causing general mayhem so long as an escape route had been preplanned. Some field modifications also saw Dingos equipped with 2 x 0.303 Vickers K-series machine guns, guns originally intended for aircraft mounting, which presented reliable, voluminous firepower at the expense of weight gain per gun and ammunition stocks required.

Dingos were first fielded in anger during the German invasion of France in 1940 and took part in the failed Allied defense of the country during the Battle of France (May 10th - June 22, 1940). Initial Dingo operators became the 1st Armoured Division and the 4th Northumberland Fusiliers where they were put to good use, relying on speed to penetrate enemy lines and collect important information on enemy strength and ongoing movements. The Dingo operated in this fashion throughout all of World War 2 where its strengths and qualities were not as quickly overlooked by infantry as they could be by casual readers. Its value was thoroughly proven by the fact that production on the little machine did not cease until the end of the war in 1945, having entered manufacture at the start of the war back in 1939 and total vehicles built reaching 6,626.

The diminutive Dingo's general configuration went on to influence the similar-looking, though dimensionally larger, Daimler Armored Car of 1939 which also saw service in World War 2. The Italians, always fond of light battlefield systems, adopted the Autoblinda Lince in 1943 as a copy of the successful British Dingo, and operated these into 1945 across the 129 examples produced. Some of this stock also fell to retreating German forces attempting to hold northern Italy against Allied gains (following the formal Italian surrender in September 1943).

The Dingo continued in British Army service into the Cold War years (used in the Malayan Emergency), its replacement not found until the Daimler "Ferret" model of 1952 was adopted. The last Dingos may have served into the 1970s in both unofficial and official roles. Operators of the Dingo (beyond the Britain) included Australia, Canada, India, New Zealand and South Africa (see operators section for full listing). Portugal utilized the Dingo in its Colonial Wars spanning from 1961 into 1974.

(Not all weapon types may be represented in the showcase above)
Dependent upon armament.