Authored By: Staff Writer | Last Edited: 05/02/2017 | Content ©www.MilitaryFactory.com | The following text is exclusive to this site. 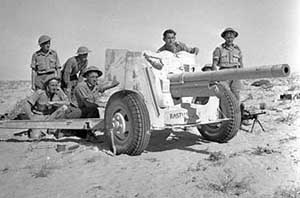 The Ordnance QF 2-pdr anti-tank gun was barely adequate for tackling German tank armor at the start of World War 2. However, it was the main anti-tank weapon system available to British troops at the time and lived along the production lines for a good few years. It saw better success in the Pacific Theater against the thinly armored Japanese tanks but fared horribly in the defense of Belgium and France and was wholly outclassed during the North African Campaign. Key limitations in the system were her tripod base which set her as more of a static defensive piece and her smallish 40mm projectile - available only in an armor-piercing form, precluding her use against infantry in a dual-role mentality. As such, the QF 2-pdr proved a heavy weapon for its class and held little in the way of stopping power or adaptability. Many such systems were lost in the desperate escape from Dunkirk, France, these falling into German hands.

British warplanners were already aware of these inherent limitations by 1938 and put to penciling out a newer design requirement with more capability. Delays dragged the program along and, by the time of full scale war across the globe, British production lines were already committed to getting more of the QF 2-pdr systems to awaiting British and Commonwealth hands. When the new weapon system - the "57mm Ordnance QF 6-pdr" - was actually ready for full-scale production, the QF 2-pdr was still in play and delayed the entry of the QF 6-pdr even more. The weapon was finally accepted into operational service with the British Army by the end of 1941.
Advertisements

The QF 6-pdr offered up a greater chance of armor penetration at distance by its use of the more standard 57mm projectile. The projectile weighed in at 6.28lbs and could pierce up to 68mm of armor at 1,000 yards. She measured a running length of 2.5 meters with a rifled gun barrel providing accuracy. The gun system, mount and carriage altogether weighed 2,471lbs. The gun barrel could traverse some 90 degrees left or right and elevate between -5 and +15 degrees. The 57mm projectiles exited the barrel at 2,700 feet per second. The barrel sat atop its adjustable mount which was straddled on either side by a pair of rubber-tired road wheels for transport. The weapon was braced by a split trail carriage that opened for recoil absorption along the ground and closed for transport by a mover vehicle. The road wheels allowed a crew to relocate or reposition the gun system over short distances. A typical crew was six personnel - each needed to manage a key facet of the QF 6-pdr's operation. A three-sided shield allowed for some base protection for the gunnery crew which has to be positioned directly behind the gun. The recoil mechanism was located under the barrel base and the weapon was loaded/reloaded by its breech at the rear of the barrel.

The QF 6-pdr primarily fired a High Velocity Armor-Piercing (HVAP) projectile which was designated in the British inventory as the "Armor-Piercing Composite Rigid" (APCR). In 1944, the QF 6-pdr became the first cannon in the world to fire an Armor-Piercing, Discarding Sabot (APDS) projectile for improved penetration values. Unlike the QF 2-pdr, a high-explosive shell was designed for the QF 6-pdr and this served well to tackle stout fortifications and enemy troop concentrations.

At the time of its inception, British Army troops were desperate. During the North African Campaign, the QF 2-pdr proved so ineffective that the QF 25-pdr field gun was utilized as an anti-tank gun to fill the need. As such, when the QF 6-pdr became available, British and Commonwealth crews rejoiced at her arrival for now their respective armies maintained a system capable of meeting German armor head-on to an extent. In British Army service, these guns were specifically managed by Royal Artillery personnel.

The QF 6-pdr rated highly against all available German tanks of the time - this encompassing the Panzer I, Panzer II, Panzer III and Panzer IV series. She was a relatively light system that could be towed at speed across different terrain surfaces and set up in a short period of time. Her reach was double what was offered in the preceding QF 2-pdr system which gave her crews a fighting chance against the range of German tank machine guns. Her conventional design was more offensive-minded in nature than the fixed tripod placement of the QF 2-pdr before it. However, with the arrival of the Panther and Tiger series - heavy tanks sporting thick frontal armor and powerful main guns - the days of the QF 6-pdr were undoubtedly numbered. Regardless, several notable conversions of the base QF 6-pdr existed including the 6-pdr gun barrel on the "Carriage, Q.F., 6-pdr Mk III" carriage which was supplied to airborne troops. This version featured shorter carriage legs that allowed for air transport with British gliders. Such systems were fielded in the desperate assaults and subsequent defense of Arnhem during General Montgomery's brazen Operation Market Garden - the goal being to capture three key bridges. The QF 6-pdr saw her baptism of fire in the North Africa Campaign and quickly replaced the QF 2-pdr series in the anti-tank role with British and Commonwealth forces.

The QF 6-pdr Mk 1 was an early version fitted with the L/50 series barrel but only saw limited production. The QF 6-pdr Mk 2 was given the shorter L/43 series barrel and became the initial quantitative production variant. The QF 6-pdr Mk 3 was a tank gun version of the Mk 2 artillery model. The QF 6-pdr Mk 4 was completed with the L/50 barrel and fitted with a single-baffled muzzle brake. The QF 6-pdr Mk 5 was a tank gun variant of the Mk 4 artillery production model. The Molins Class M was a conversion that mated the 6-pdr gun with an automatic loader and fitted onto navy ships and aircraft frames for devastating repeating fire. British production models were featured along four distinct carriages (Mk 1, Mk 1A, Mk 2 and Mk 3). Tank gun versions were installed into Crusader, Cavalier, Centaur, Cromwell, Valentine and Churchill tank turrets. The Canadian Ram tank also fitted the British 6-pdr gun.

In America, their own 37mm Anti-Tank Gun M1 was reaching the end of its useful battlefield life and authorities elected to copy the British QF 6-pdr in its place - specifically the QF 6-pdr Mk 2 production model but these fitted with the L/50 series gun barrels. Beginning in 1941, engineers designed and developed the "57mm Anti-Tank Gun M1" after the British version and production was handled in US factories. The M1A2 soon followed with some slight alterations (reworked traverse mechanism) and one version was even mounted onto American half-tracks and trucks for mobile anti-tank point offense and defense. This mating turned out to be so popular and effective that the British Army and its Commonwealth forces all took up this self-propelled version in their stables. The half-tracked version was set upon the M3 half-track and designated as the "57mm Gun Motor Carriage T48". The Soviet Army received this breed and knew it as the "SU-57". Some 15,637 M1 57mm guns were manufactured by the United States on six different carriages (M1, M1A1, M1A2, M1A3, M2 and M2A1).

As the tenure of the 6-pdr wore down in frontline British Army service, the system was passed down from the artillery regiments to infantry companies. Through lend-lease, the British QF 6-pdr also found a home in the inventory of the Soviet Union, their Red Army looking for any piece of warring equipment to stave off elimination at the hands of the Nazis. Despite being outmoded by the later generation of German heavy tanks, the QF 6-pdr soldiered on through to the end of the war. Its excellent engineering and design ensured it a place in the inventories of nations after the war and for decades later still. The US dropped it from service shortly after the war while the British Army held it in service until 1960.

Free French forces were handed the American M1 version via Lend-Lease. Israeli became a future operator of the weapon as did Pakistan.
Advertisements 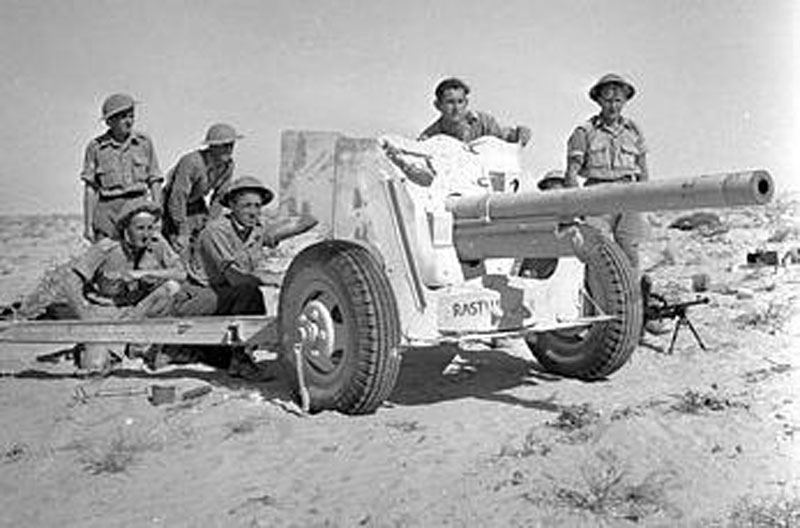