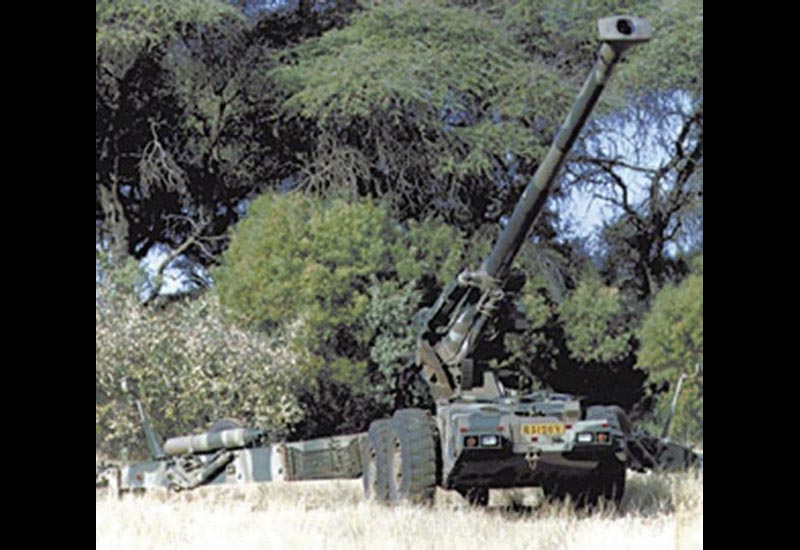 Authored By: Staff Writer | Last Edited: 02/04/2019 | Content ©www.MilitaryFactory.com | The following text is exclusive to this site.
During much of the Cold War, apartheid reigned in South Africa. This official policy movement - with origins in colonial times - attempted to sequester the rights of non-white peoples in the country. Violence naturally broke out against the movement over time and the United Nations instituted a trade embargo that severely limited the defense procurement abilities of the African country. As such, a move was enacted to circumvent the arms embargo by developing military equipment through indigenous means. This gave rise to the South African defense industry that - despite the end of apartheid in 1994 - continues today in making excellent pieces of military hardware, from small arms to tanks, attack helicopters to strike aircraft.

In 1966, the South African Border Wars erupted (also known as the Angolan Bush War) and this placed stress on the South African Army who were still utilizing aged stocks of World War 2-era military equipment. Since the established arms embargo restricted any new legal purchases of military equipment, internal development began. One initial requirement became the need for a new artillery field gun of 155mm - a rather standard battlefield offering anywhere in the world. South African combat actions shown this to be a real limitation when dealing with enemies utilizing the latest in Soviet-inspired weapons. Up to this point, primary South African Army experience came from the use of British and American-originated artillery gun systems. Design work (with assistance from Canadian engineer Gerald Bull) began in 1976 under the direction of the Lyttleton Engineering Works and this spanned into the early 1980s. The end-product - in effect a derivative of the GC-45 howitzer series developed by Gerald Bull's Space Research Corporation in the 1970s - became the "G5" 155mm gun which underwent a lengthy period of testing and evaluation before being adopted by the modern South African Army. Production was charged to Denel Land Systems (this formally Lyttleton Engineering Works) with the first units being delivered in 1983.

At its core, the G5 mimics much of the artillery requirements as found in Western developments. The base design consists of a four wheeled carriage system with integrated tow arms (known as a "split trail" assembly) required for vehicle hookup and transport. The carriage is believed to be Chinese in its origin and features a small auxiliary power unit (APU) which allows for independent propulsion of the carriage over short distances - though at a very low speed. The gun mount is affixed to the carriage while the gun barrel, breech and elevation/traverse controls are set atop the mount. A minimal crew of eight trained artillery personnel are required to manage the various functions of the weapon - from ordering to ammunition management and loading to firing. The weapon, all told, weighs in at 30,100lbs with an overall running length of 31 feet. The barrel measures nearly 23 feet and is of 45 calibers in design. The G5 primarily fires a 155mm High-Explosive (HE) shell intended to dislodge or destroy "soft" enemy targets at range, these targets usually out of the line-of-sight. The breech (the region where the shells are physically loaded into the firing chamber) is semi-automatic in nature, featuring an interrupted screw design and this semi-automatic function is designed to assist the gunnery crew in maintaining a healthy rate-of-fire (roughly 3 rounds per minute). The barrel's elevation is limited to +75 and -3 while traverse is 65- to 82-degrees based on the elevation. A large single-baffle muzzle brake is fitted for recoil retardation. Muzzle velocity of the outgoing shell is reported at 2,943 feet per second while ranges are out to 19 miles with unassisted ammunition. A rocket-assisted long-range, armor piercing projectile can reach out to 30 miles if needed. Like other 155mm weapons of this class, it is assumed that the G5 can make use of chemical projectiles if ever required.

The G5 has since appeared in four distinct production forms beginning with the initial G5 Mk I. This was followed by the improved G5 Mk II and, finally, the newer G5 Mk III - each showcasing progressive changes to make for a more complete weapon system and keep up with the changes of the modern battlefield. The G5-2000 of 2002 became the latest incarnation of the G5 family and was completed with an all-new, longer barrel of 52 calibers intended to increase accuracy at greater ranges. The G5 artillery system has also been successfully implemented onto tracked and wheeled vehicle carriers where the gun could be fitted to an enclosed, 360-degree traversing turret. This has only served to broaden the tactical scope of the already potent weapon considerably. The six-wheeled South African "G6" of 1987 is an example of this. Other foreign parties have taken note and interest in this arrangement and have procured the weapon for this very purpose.

Prior to the US invasion of Iraq in 2003, Iraq was the largest operator of the G5 series with approximately 100 guns in its inventory. As Iran owned at least 30 of their own systems, the weapon was fielded against itself in the Iran-Iraq War of 1980-1988. South Africa procured 45 guns for their own inventory to date while Malaysia took on 22 units and Qatar purchased a modest 12 systems. It is believed that Israeli may also make use of the G5 system to an extent, these reportedly having seen action in the Beqaa Valley in 1986.

First South African Army combat use of the G5 was recorded during the 1982 conflict with Angola.

(Not all weapon types may be represented in the showcase above)
Dependent on ammunition carrier.