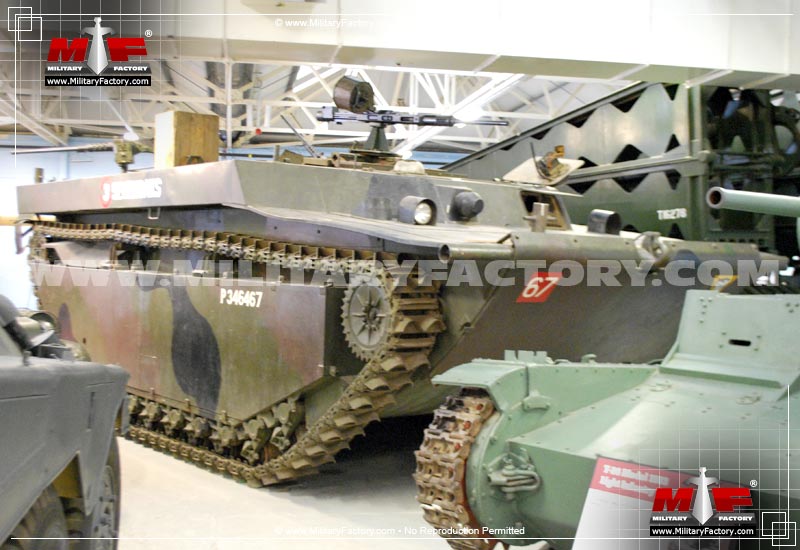 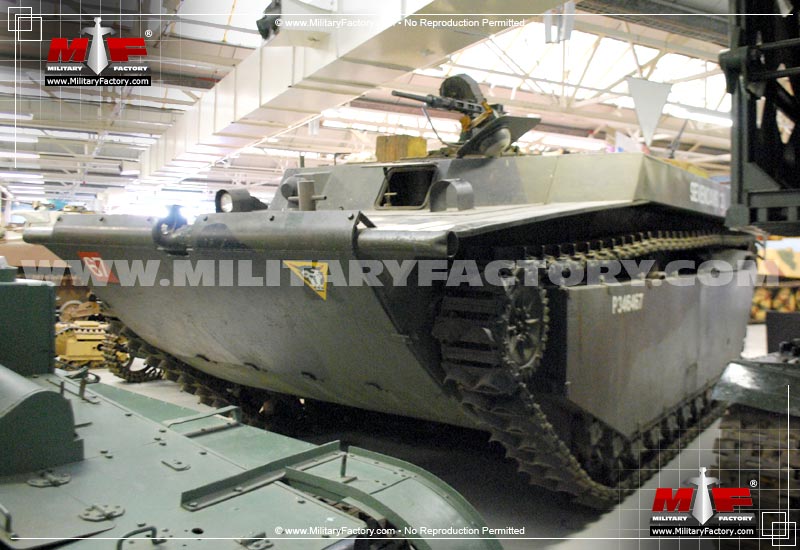 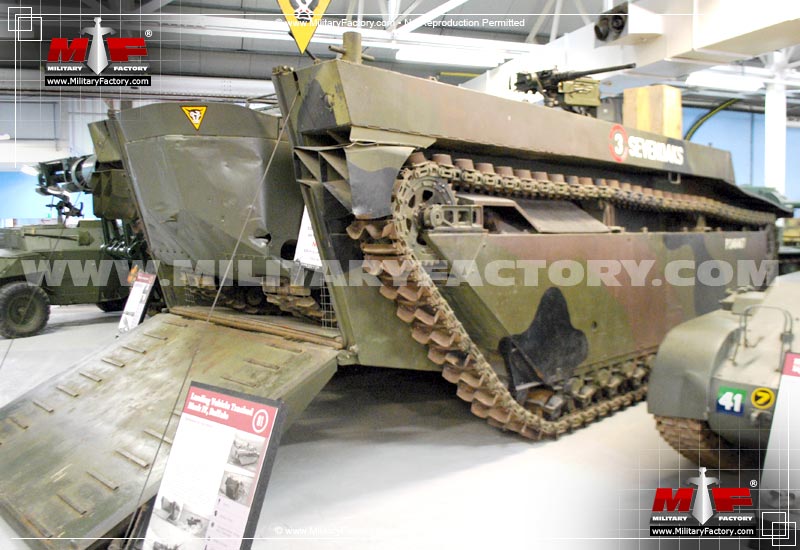 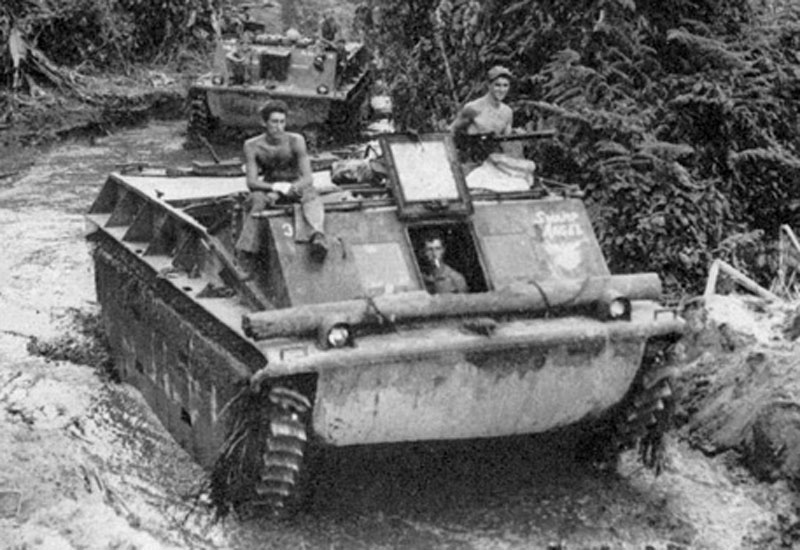 Front right side view of an LVT in the Pacific Theater; note armament, track width and driver position in forward hull.
❮ ❯

LVTs served the US Marines well in their island-hopping campaigns across the Pacific Ocean in World War 2.

The LVT ("Landing Vehicle Tracked") began a long line of amphibious tracked American military vehicles for the US Army and Marine Corps that still continues today. The LVT of World War 2 fame had its origin in a tracked civilian design (known as the "Alligator") by American Donald Roebling, Jr. Roebling specifically designed his Alligator amphibious LVT as a rescue vehicle to be utilized in the heavy Floridian swamp region to which its robust tracked nature and boat-like qualities made it an ideal vehicle for such unforgiving terrain. Seeing the value of such a machine, and coupled with the fact that world war was closing in on American soil from two oceans, the United States Marine Corps talked to Roebling about modifying his design for military use in 1940. As the Marine Corps were trained to fight on land from water, and the biggest threat to America now being the Empire of Japan in the West where island-hopping was soon to prove the norm, it seemed like a good fit.

Roebling delivered the first incarnation of his civilian design with the "LVT-1" and production by Food Machinery Corporation began soon afterwards in 1941 with 200 contracted vehicles. The LVT-1 sported a top speed of 12 miles per hour and armament was either 2 x 0.30 caliber general purpose machine guns or 2 x 0.50 caliber heavy machine guns mounted on rails or pintle mounts with optional limited shielding. Troop capacity was 18 to 24 combat ready soldiers. After some experience, four guns - two of each type - were being fitted forward and aft of the loading area for maximum support defense. Power was derived from a single Hercules WXLC-3 engine. Some 1,225 examples of the LVT-1 series were ultimately produced. It is of note that LVT-1 series models were not armored in any way beyond their factory "skins" and were generally intended as resupply vehicles.

The LVT-1 was modified with the next variant, the LVT(A)-1 of 1942 ("A" signifying "Armored"), to serve as a fire support vehicle with the installation of an M3-style tank turret (37mm gun), rear-mounted machine guns and armor plating. The engine was changed over to a single Continental W970-9A series but remained largely faithful to the original LVT1. A total of 510 examples were delivered. However, the LVT1 production model was still too closely tied to its civilian roots to make it an adequate "weapon of war" for the sake of amphibious assaults. Armor protection was still too thin for comfort and maintenance issues grew over time to make critical systems quite unreliable. These issues required the LVT to undergo further refinement.

The first truly notable LVT development came next with the arrival of the LVT-2 ("Water Buffalo" / "Buffalo II") in 1942. This production version revised the general hull shape to more closely mimic that of a boat for improved water traversal. A new suspension system was introduced for better terrain capability and bolt-on aluminum track grousers were installed for ease of maintenance and repair. As the M3A1 Stuart light tank was in full production by this time, it made logistical sense to utilize its existing components - namely the powertrain - in the revised LVT-2. The engine was now relocated to the back of the hull with the crew cabin moved to the front. The onboard arrangement then left the central portion of the hull to be hollowed out and used for cargo or passengers (this area was still left "open-topped"). However, this revision led to a few inherent restrictions - namely, the centralized location of the loading area restricted the LVT-2 to carrying just infantry and some light equipment with applicable supplies. Since there was no loading ramp, infantry would have to scurry off the vehicle over the hull sides under their own power in full combat gear, utilizing precious energy in the process while exposing themselves to the risks of the modern battlefield - risks such as machine gun and small arms fire. Vehicles and valuable towed artillery pieces, therefore, could not be carried in such a space restricted with only a topside entry/exit access point.

The LVT(A)-2 of 1943 was nothing more than an LVT-2 production variant with armor protection. Troop capacity was eighteen and some 450 examples were produced.
Advertisements

The legacy of the LVT changed for the better with the introduction of the LVT-4 ("Buffalo IV") of 1943. The LVT-4 relocated the powerplant to the front hull just ahead of the crew cab, which retained its position at the forward portion of the vehicle. This kept the rear area of the hull completely free for the transportation of men, equipment and - perhaps most importantly - light vehicles and artillery systems. Access was thoroughly improved with the addition of a rear folding ramp that could be activated from within the confines of vehicle itself. With a rear ramp in place, troops could then readily exit the vehicle under some relative safety using the forward hull of the LTV-4 as an armored shield of sorts. Similarly, JEEPS and towed artillery pieces (up to 57mm in caliber) could be offloaded quickly after the LVT-4 had made landfall. Some 30 combat ready troops could be carried into battle from their US Navy assault motherships. In all, 8,351 LVT-4s left production lines for war, easily making this production mark the decisive LVT model.

At its core, the LVT-4 was largely similar to the LVT-2 before it with the exception of the new layout arrangement and a revised driver's instrument panel as well as additional side pintle mounts for optional machine guns. A later production model, the LVT(A)-4, went on to fit the open-topped turret assembly of the Gun Motor Carriage M8 with its powerful 75mm M2/ M3 main gun effectively evolving the LVT-4 into something akin to an amphibious light tank for fire support duty. This gun system was mounted to the rear of the hull and protected over in armor and proved popular in the island-hopping campaigns of the South Pacific where determined - yet ultimately fanatical - Japanese Army soldiers were a well dug-in foe. 1,890 examples of the LVT(A)-4 were produced through 1944.

The LVT-4(F) "Sea Serpent" was a British conversion of the LVT-4 model to accept a pair of "Wasp" flamethrowers for actions in the Far East Theater. The flamethrowers were seated on flexible mounts at the left and right forward sections of the loading area while a single machine fitting was set in a semi-armored rounded "tub" at the stern. Like all other LVT developments, the gunnery crew and passengers were in the open-topped portion of the vehicle loading area but the LVT-4(F) was nary used by the British Army before the war ended in August of 1945. The British also based their "Amphibian, tracked, 4-Ton GS Neptune" model on the LVT-4 though little production ensued. Similar designs included the "Sealion" amphibious recovery vehicle and the "Turtle", a mobile workshop platform.

The LVT(A)-3 designation was reserved for an armored version of the LVT-4 but these were never sent into production. The LVT-3 "Bushmaster" designation signified a somewhat drastically-altered LVT appearing in 1945. A dual engine arrangement was utilized that mounted the powerplant on side hull sponsons. The rear ramp of the LVT-4 was retained. Development of this model was handled by Borg Warner Corporation of Michigan and saw production reach 2,964 examples before the end of the war and were first utilized in the assault on Okinawa in April of 1945.

The LVT(A)-5 was produced in 269 examples first appearing in 1945. It was essentially an LVT(A)-4 with a fully-powered turret emplacement complete with a gyrostabilized howitzer. Tests carried out by the United States military were used to further prove the adaptability of the LVT-4 chassis with alternative armament arrangements but many of these fell to naught. One such idea attempted to fit rocket launchers along the hull sides.

The British fitted their versions with 1 x 20mm Polsten cannon with 2 x 0.30 caliber Browning machine guns. British LVT4s could also deliver their diminutive "Universal Carrier" tracked armored vehicles as well as 6-pounder towed artillery pieces to the fray. As part of the British Commonwealth, Canada also saw use of the LTV series in their war time inventories - fitting a Ronson flamethrower to the forward hull.

LTVs of all types went on to serve with the United States Marine Corps and the United States Army - many serving in operations throughout the Pacific Theater of War. LTVs were first used by American Marines in the invasion of Guadalcanal and are most closely associated with their actions in World War 2. LTVs did see some operational service in European campaigns - most notably during the Scheldt and Rhine operations of 1944-1945 - but largely remained a mainstay for US Marines in the Pacific. British "Buffalos" were used in the crossing of the Elbe River in late war actions in Europe.