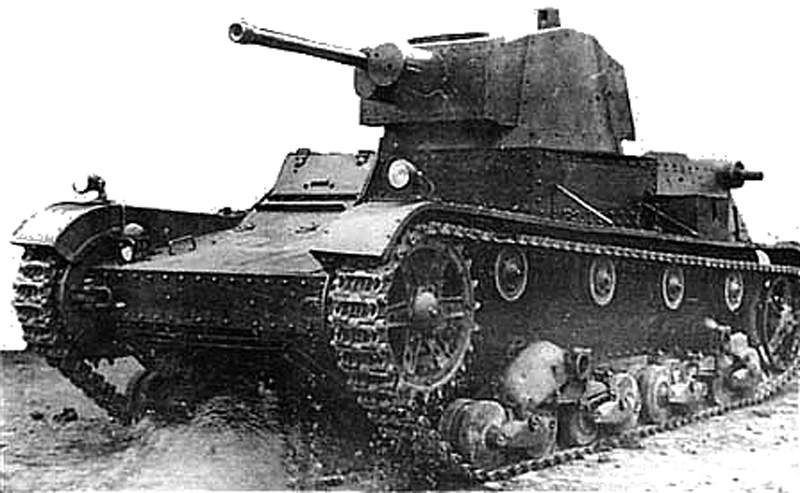 The Polish 7TP Light Tank series put up a valiant defense against the invading German Army in the opening phases of World War 2.

Authored By: Staff Writer | Last Edited: 03/19/2019 | Content ©www.MilitaryFactory.com | The following text is exclusive to this site.
The 7TP series was of a Polish light tank design, based on the British Vickers-Armstrongs Ltd 6-ton light tank (Mark E). With war in Europe an ever-growing prospect, the Polish government saw a need to replace their diminutive "tankettes" with a more substantial combat system with improved offensive and defensive capabilities. The cost-effective tankette had seen her best days and was an obsolete breed by the 1930s. Designs for a new Polish light tank were drawn up beginning in 1931 and the early proposal was a derivative of the existing Vickers-Armstrong approach utilizing a dual-turret machine gun configuration. The vehicle installed 2 x Ckm wz. 30 series machine guns in separate turrets stop the hull superstructure. The engine was mounted to the rear and the tank propelled about by way of a conventional "track-and-wheel" system.

Though 22 of the vehicles were produced by 1936, a new rearmament plan by the Polish government called for the implementation of a 37mm anti-tank armament on a light tank chassis, this spurred along by world thinking beginning to shift from the concept of "multi-turret" tanks altogether. As such, the aforementioned production vehicles were retrofitted with a Swedish 37mm Bofors Model 37 L/45 main gun and serial production of all-new versions ensued in 1938. The 7TP series became the world's first combat tank to utilize a diesel-fueled engine (gasoline-fueled engines were prone to fires when hit by enemy projectiles). Turrets also incorporated a radio suite. The 7TP was formally delivered to Polish Army forces in 1939. While no official designations existed between the dual-turret and single-turret designs, post-war publications have assigned "7TP dw" to the former and "7TP jw" to the latter.

7TPs would see action almost immediately, albeit in limited quantities, during the German Invasion of Poland in September of 1939. By all accounts, the 7TP proved a solid if unspectacular weapon, giving advancing German forces pause while Polish crews achieved early respectable kill-to-loss ratios. Unfortunately for the Poles, the light tank was in short supply and speed and utilization of German forces surpassed Polish battlefield prowess in the long run. Polish forces were thrown into last-ditch defensive positions where losses of available 7TPs mounted and German tactics improved with experience while numbers grew and air superiority was won. At least 24 twin-turret 7TP tanks were in inventory at the time of the German invasion of Poland.

With the conquer of Poland secured, the German Army began to reconstitute captured 7TP tanks (as many as 20 examples under the Pzkpfw 731(p) designation) to strengthen their inventory - securing newly acquired Polish territory being a prime role for such war trophies. Some were reportedly passed on to the Romanian Army. An improved version known as the "9TP" was in a prototype stage by the time Germany invaded Poland and thusly never saw serial production. What completed prototypes there were available saw combat service in the final defense of the Polish capital of Warsaw.

139 7TP tanks were produced in all from 1935 to 1939. Poland utilized 133 7TP jw tanks, 16 7TP dw tanks and 13 9TP tanks during the war. Beyond its use by the Poles and Germans, the 7TP series was never used outside of Poland proper. Romania had shown pre-war interest in the design before settling on the Czech LT vz. 35 series instead. The Red Army managed to capture a sole example during their Polish invasion campaign.