The T-64 was said to have been plagued by mechanical problems, leading to a short production life.

Authored By: Staff Writer | Last Edited: 03/25/2022 | Content ©www.MilitaryFactory.com | The following text is exclusive to this site. 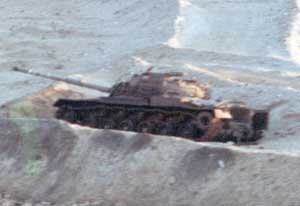 The natural progression of Soviet tank design during the years following World War 2 eventually produced the T-64 Main Battle Tank. The T-64 showcased qualities already having been proven in the war time T-34's successor - the T-54. The T-54 was evolved into the NBC-capable T-55 to which the T-62 was then created as a more advanced option. However, the T-62 failed to surpass the T-54/T-55 series in both combat exposure and sheer production numbers - totaling 22,000 examples to the original's grand estimation of 85,000 to 100,000 units produced. As such the T-55 was remained in production while the T-62 line was discontinued. The T-64, therefore, is what could be considered the Soviet Union's first true "Main Battle Tank" (as the M60 as was to the Americans). Development stemmed from the early 1950s until approximately 1962 to which the type was adopted for service in the Red Army with production beginning in 1963. Production would last until 1987 to which roughly 8,000 to 13,000 examples were delivered. However, the T-64 was never offered up formally for export sales thusly limiting its use to the Red Army. Operators eventually went on to include Moldova, Ukraine and Uzbekistan - mainly due to the fall of the Soviet Empire and stationed Soviet Army tanks being passed on to successor host states. The arrival of the T-64 directly influenced the arrival of the improved American M60A3 production mark in response prior to the development of the failed MBT-70.

The T-64 was born of a prototype not unlike the T-54/55/62 series before it. There were many notable exceptions in its design to help differentiate it from the former examples. The five large road wheels consistent with earlier Soviet tanks were dropped in favor of six small road wheels to a track side. While the previous designs all lacked track return rollers, the T-64 prototype involved as many as four along the upper track region. The drive sprocket was now relocated to the rear of the hull with the track idler at the front. The hull was suspended by an effective and advanced torsion bar suspension system. The driver's position was now centered at the front hull as opposed to front left. The turret was largely reminiscent of the one featured on the T-62 and original armament was the same 115mm smoothbore main gun (the preceding T-62 design was the first combat tank anywhere in the world to showcase a smoothbore main gun). The T-64's gun was the D-68 (2A21 series) while a pair of snorkels could be erected prior to entering bodies of water for amphibious crossings. The ammunition count totaled 36 x 125mm projectiles and included APFSDS, HEAT-FARG and HE-FRAG types as needed. There was provision at the front hull for the adding of a mine clearing plow. Anti-infantry defense was handled by the 7.62mm PKT coaxial machine gun in the turret. To counter low-flying aerial threats, the crew managed a turret-roof-mounted 12.7mm NSVT series heavy machine gun. Standard NBC protection was afforded to the crew as was a fire extinguishing system. Armor protection ranged up to 450mm in thickness and involved a mix of glass, plastic and steel. Overall weight was roughly 42 short tons. An electro-hydraulic autoloader managed the reloading function of the main gun while reducing the crew to three personnel - the commander, driver and gunner. This not only saved on wait but increased internal volume and allowed for a smaller turret design and, thusly, shallower external profiles. As with the T-62, the T-64 incorporated two-axis stabilization of the main gun. Protection was afforded by the aforementioned composite armor designed to counter the new 105mm guns of Western tanks (explosive reactive armor blocks were eventually added in later T-64 production marks).

The engine of choice became the 5DTF 700 horsepower diesel system which dramatically improved performance (on road and off road) of the vehicle over that of the T-62. The engine was fueled through three internal fuel cells and boosted by the carrying of external, jettisonable drums at the hull rear. Operational range was 310 miles and road speeds peaked at 37.5 miles per hour.

Production of the T-64 series was ordered out of the Malyshev Factory at Kharkov, Ukraine, in October of 1963 and initial models were all armed with the stated 115mm smoothbore main gun system (lacking the thermal sleeve). Some 600 first-batch T-64 production models then appeared though the tank was not formally introduced into operational service until late 1966. The T-64 was not seen outside of Russian borders until it was deployed in East Germany in 1976 with the Guards Armored Division, Group of Soviet Forces. It was later deployed with Russian forces in Hungary.

While production of the T-64 was ongoing, engineers worked on a revised form to better meet the demands of the modern battlefield. Key to this new development was the incorporation of the large 125mm D-81T series main gun attached to an autoloader (eight rounds per minute). The larger 125mm ammunition naturally took up more internal space than the 115mm projectiles but this was offset by the lack of a fourth crewmember. The suspension system was improved and side armor skirts were issued to protect the critical running gear from damage. Onboard stowage was increased due to the lack of internal space for the crew's personal affects. Later upgrades improved the fire control system (FCS), night vision capability and communications. The new production form came under the designation of "T-64A" while the requisite command tank version became the T-64AK. This version brought about additional communications equipment as well as an identifiable telescoping mast for the loss of the 12.7mm turret anti-aircraft machine gun.
Advertisements

A 1976 upgrade brought about another revision to the fire control system as well as improved night vision support and gun stabilization. The engine was now a multi-fuel design for greater logistical flexibility. In the early 1980s, another upgrade brought about formal use of external smoke grenade dischargers to replace the engine-generating smoke system used on prior Soviet tanks. Other combat-oriented equipment was also upgraded in time.

The next production mark of note became the "T-64B" which was the result of a program furthering a T-62A-2M vehicle series (this development also going on to influence the upcoming T-72 and T-80 series of Soviet main battle tanks). The T-64B brought about compatibility to fire the 9M112 "Kobra" (AT-8 "Songster") anti-tank guided missile from its 125mm main gun barrel. As such, the 125mm ammunition supply was reduced to 28 projectiles for the addition of some 8 Kobra missiles. The Kobra was directed via radio-command guidance. A new hull design and turret armor allocation promised weight savings as well as better protection. A new fire control system was issued as was a laser range finder and smoke grenade dischargers. Explosive Reactive Armor (ERA) blocks created the alternative T-64BV designation. The T-64BM was given the 6TD 6-cylinder diesel engine of 1,000 horsepower. The T-64B1 lacked Kobra missile support. Command vehicles became the T-64AK, T-64BK, T-64B1K and T-64BV1K (ERA support). A new engine - the 6TD diesel series - was introduced after 1979 and gave rise to the T-64AM, T-64AKM, T-64BM and T-64BAM production marks. Rebuilds of original T-64 production models to the T-64B standard became the T-64R. The T-64B appeared in both East Germany and Hungary in 1981 with Russian forces.

The only documented combat actions involving T-64s have occurred in Soviet/Russian hands against Chechen rebels for the T-64 was largely issued to special frontline units which limited its combat reach and foreign availability due to its advanced features. Interested buyers looking for a modern solution were naturally led to the T-72 series instead. The T-64 was not without its limitations for it still retained the poor "hull down" shooting quality of the T-54/55/62 series before it. Additionally, the fighting compartment remained cramped and rather utilitarian - the lack of a fourth crewmember also added strains on the remaining three crew. The selection of an autoloader for the main gun brought about production and reliability issues in the long run while the complex suspension system was also noted for issues in-the-field.

In the Russian inventory, the T64 was utilized in conjunction with the arriving T-72s. After the fall of the Soviet Union, Ukraine inherited approximately 2,350 T-64 combat tanks. They then proceeded to upgrade these through several modernization programs which are still in service today. Uzbekistan manages roughly 100 of the mark.

While the T-64 shares an outward similarity to the T-72, the T-64 is differentiated by the infrared searchlight to the left of the 125mm main gun. Subtle differences are also apparent in the track width, which is slimmer than on the T-72 and the overall shape of the turret itself.
Advertisements 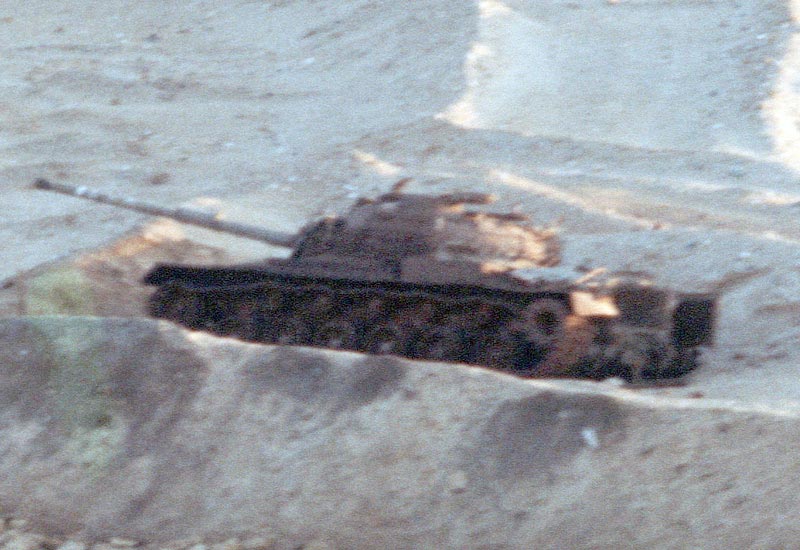 Image courtesy of the the United States Department of Defense imagery database.
2 / 2 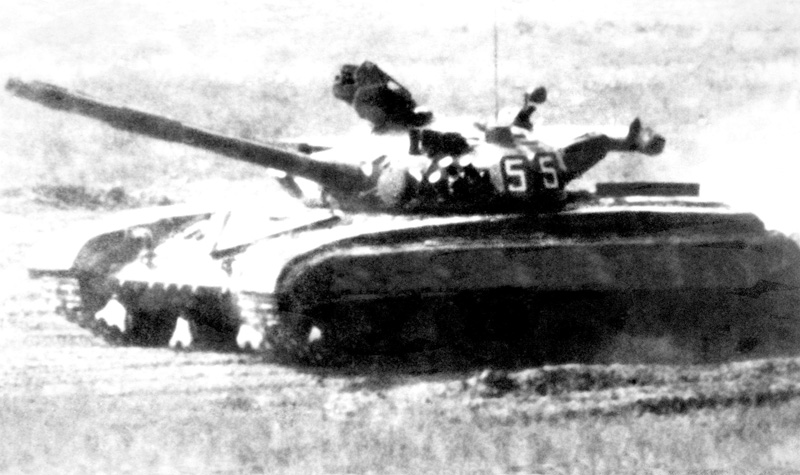