The sheer size and lack of mobility of the KV-2 made its production life short and forgettable. 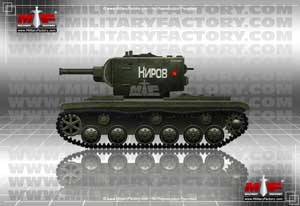 The KV-2 assault gun tank was developed from the KV-1 series of heavy tanks appearing in 1939-1940 with the Red Army. Whereas the KV-1 series was intended as a direct combat tank designed to tackle enemy tank systems and spearhead advances, the KV-2 was utilized moreso as a close-support/fire-support vehicle designed to lob large-caliber, high-explosive shells against enemy positions during such an advance. Key to the form and function of the KV-2 was its 152mm main gun armament and stout armor protection which made for an imposing combat system. However, this 152mm howitzer was set within an awkward, boxy turret that proved rather unwieldy in the heat of battle and limited the tactical usefulness of the design as a whole. As such, production was limited to approximately 255 vehicles before Soviet attention turned to other priorities and production of the type never resumed. The KV-2 received its designation from the acting Soviet Defense Minister of the time - Klimenti Voroshilov. Its design utilized the same running gear and hull of the KV-1 with design work undertaken from 1938 into 1939. Production was handled out of the Kirov facility and ChTZ, a heavy machinery tractor plant.

For some time, Soviets were attempting to mate a variety of big guns to tracked hulls. The KV-2 was something of a success in that respect and was fielded to good effect against the Finnish Army during "Winter War". However, by the time the tank was thrown at the German Army - a much more studied, experienced and prepared group of soldiers with excellent anti-tank weapons and doctrine - soon shown the limitations of the KV-2 system to a high degree.

A limited set of early KV-2 vehicles were fitted with the 122mm M1938 L/22.7 (4.8 inch) howitzer but this was eventually "upgunned" to become the more noted 152mm M1938 L/24.3 (6 inch) caliber weapon. The 152mm gun became the largest caliber weapon ever fitted to a serial production tank. In either case, the armament required a large, powered turret structure for which the crew could manage its functions and recoil while in relative safety from battlefield dangers and the elements. In this respect, Soviet engineers did not disappoint, creating an ugly, box-like, 12-ton turret sporting 360-degree traversal and some 3 inches of armor protection. Elevation was available though limited to 37 degrees. One of the key inherent deficiencies in the KV-2 design proved to be the lack of attention given by Soviet engineers to this turret when added to the existing KV-1 hull - engine output power was not addressed to compensate for the added weight, resulting in a tank that was much heavier than its sister and would suffer mechanically, functionally and performance-wise as a result. Additionally, it could not manage certain critical travel areas such as roadway bridges that other tank classes could.

Outwardly, the KV-2 was of a most distinct design, quite a departure from previous and future Soviet tank offerings. The type sported a running length of over 22 feet, a width nearing 11 feet and height of nearly 12 feet. Power was supplied by a single V-2K 12-cylinder diesel-fueled engine of 550 horsepower. The vehicle was crewed by no fewer than six personnel including the driver, tank commander, gunner, loaders and machine gunners. Primary armament was the 152mm M-10 main gun, this backed by 3 x 7.62mm DT machine guns - one fitted coaxially in the turret, another in the front-left hull next to the driver and the other in a rear-facing position at the back of the turret to prevent infantry attacks. 36 x 152mm projectiles were afforded to the gunnery crew. The gun was cleared to fire a High-Explosive (HE) and Armor-Piercing (AP) round at 952 feet per second and 1,667 feet per second, respectively, out to ranges of 13,500 yards. 3,087 rounds of 7.62mm ammunition were carried aboard for the various machine guns. Overall, the vehicle weighed in at 45 tons - becoming one of the heaviest tanks of its time. Armor protection could range up to 110mm in thickness and top speed was an inadequate 16 miles per hour, road ranges limited to 110 miles.
Advertisements

The turret, despite its listed 360-degree traversal, was simply too heavy, awkward and unstable for the intended role. The KV-2 could only realistically rotate its gun when on level ground - paved roads and the like - which made for poor cross-country usage. Otherwise, the crew would have to change the entire directional facing of the tank in order to fire the gun at a target area. Running gear and engines were eventually pushed to their limits and mechanical reliability was always a concern (as it was in the early KV-1 production forms). The high, slab-sided turret also presented a high side profile which, in turn, provided for a tempting target to enemy anti-tank and tanker crews alike.

All said, the KV-2 was another Soviet interim tank solution meant to stem the tide of the German advance until additional manpower and resources could be brought to bear in a responding Soviet offensive. The KV-2 was tactically limiting and presented itself too large a target to be of any frontline use. Where it did shine was in its ability to deliver her high-explosive warheads at distance and - the hope being - to dislodge dug-in enemy personnel and assist in key advances involving troops, tank spearheads and artillery support. In that respect, the KV-2 was a much-feared system but one that required constant protection and attention to keep itself viable on the battlefields of World War 2.

Only two major production marks of the KV-2 existed - the "KV-2A" and the "KV-2B". The KV-2A was the original production mark based upon the chassis of the KV-1A heavy tank while the KV-2B was based on the 152mm turret fitted to the KV-1B chassis. Additionally, the B-model added a new asymmetric gun mantlet and up to 35mm of applique armor along the front turret facing. Some KV-1B tanks were also modified as flamethrowing tanks with the addition of a flamethrower and applicable fuel stores in the turret. The Soviets also entertained the idea of fitting a 170mm high-velocity gun system to create a new "KV-3" mark but this fell to naught for priority was given to producing more of the viable KV-1 tank systems until the arrival of the 122mm-armed "Joseph Stalin" heavy tank family and the T-34 Medium Tank could be produced in sustainable numbers with the more potent 85mm main gun. Also, the large-caliber 152mm gun was much more effectively mated to a low-profile, turretless tracked chassis with the arrival of the "SU-152" assault gun of 1943. As such, existing KV-2 systems were removed from frontline service within a short period of time, phased out as soon as 1942. Any KV-2 systems still in service were modified back to their KV-1 state and sent to war.

Like other Soviet war equipment, the German Army was not shy about reconstituting captured KV-2 tanks and redesignating them in the German nomenclature. Only a limited amount of tanks saw this fate and many were simply run down until their mechanical systems gave up the ghost.
Advertisements 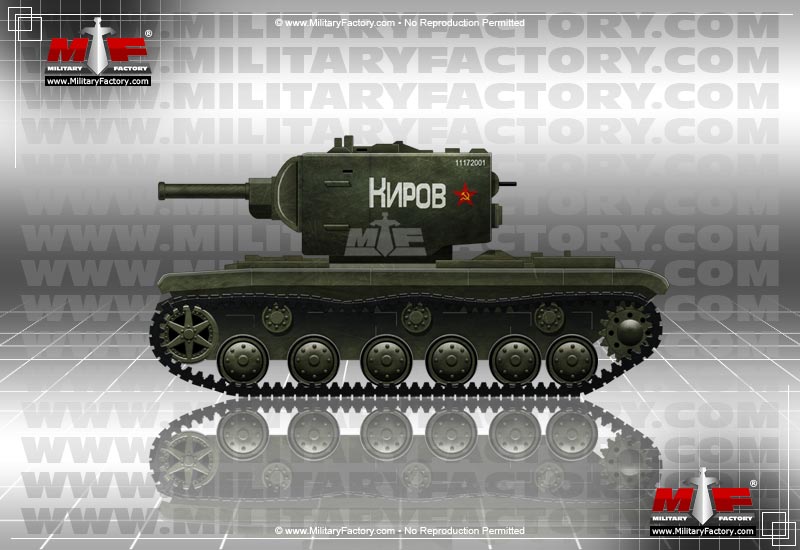 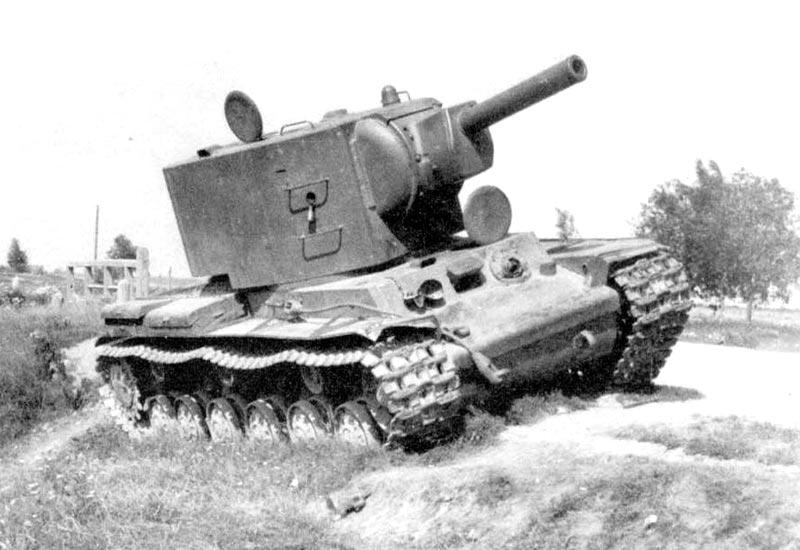 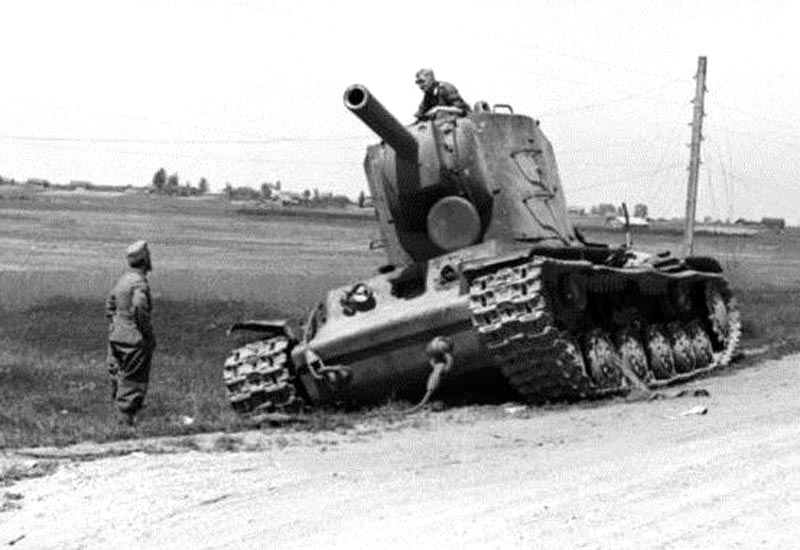 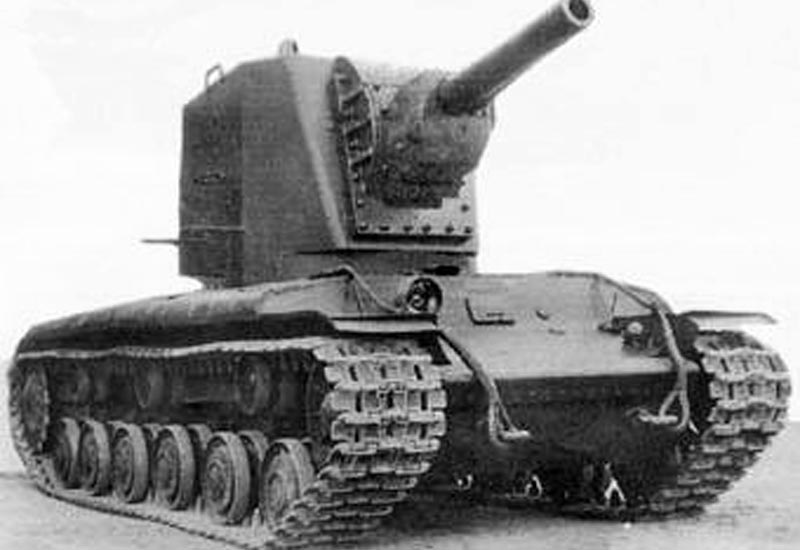