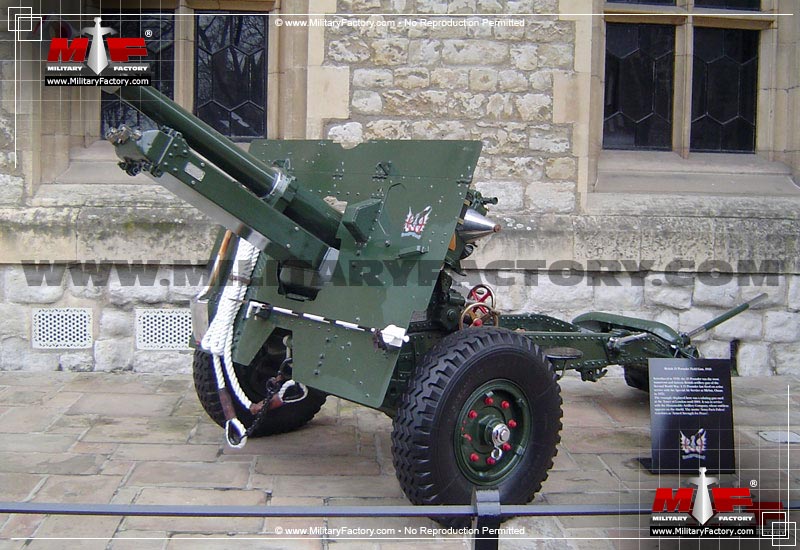 The Ordnance QF 25-pounder towed gun went on to become one of the most famous pieces of British Army artillery.

Authored By: Staff Writer | Last Edited: 02/04/2019 | Content ©www.MilitaryFactory.com; the following text is exclusive to this site.
Following World War 1 (1914-1918), British Army authorities were convinced of the prospect of combining the best elements of a field gun and an infantry howitzer in one effective battlefield piece. Evaluations were had throughout the 1920s and 1930s but the project did no gain speed until the threat of Nazism and an unstable Europe was felt in the mid-to-latter half of the 1930s. By this time, the project had received full attention as the Army sought to succeed its aging line of 18-pounder field guns along with its remaining stock of old 4.5" howitzers.

By mating an all-new gun tube to the box carriages of the existing 18-pounder field guns, the first iterations of the weapon system were known as Ordnance QF, 25-pdr Mk I. The gun was available in useful numbers by the time of the British commitment to World War 2 began in 1939 with the British Expeditionary Force (BEF) in Europe. However, the brutal conquests of the Germans forced the BEF and its allies to a stand-off at Dunkirk. After a valiant rescue of what men could be gotten out of France, the left-behind 25-pounder guns fell into German hands.

Despite this loss, work had progressed on a more definitive form of the 25-pounder and this came to be known as the 25-pdr Mk 2 on Carriage 25-pdr Mk I. These were, essentially, the true needed successors to the 18-pounder and 4.5" guns mentioned earlier. The value in the system lay in its relatively lightweight design coupled to the capability of being able to fire as both a line-of-sight field gun and as an indirect-line-of-sight howitzer by varying the charge used and elevation of the gun tube. A vertical sliding breech mechanism was fitted to accelerate reloading of the weapon. Large, rubber-tired roadwheels straddled the split-trail carriage unit and a gunshield affixed to the mounting hardware delivered nominal protection to the firing crew behind it. A circular 'table' was added under the gun which allowed the weapon to be relatively effortlessly turned by the gunnery crew.

First-use of these guns came in the North African campaign (El Alamein) and it was quickly found that the weapons could give triple-duty by proving to be effective anti-tank guns against German and Italian armor. It was also found that the base shell in use only held so much potential for defeating armor so it was suggested to utilized additional charges for the penetration needed. This, in turn, led to the installation of a large muzzle brake over the business end of the guns and, in this form, the weapon had finally reached the apex of its design.

Beyond its well-accepted field use, the weapon also formed the primary gun of the Canadian "Sexton" self-propelled gun vehicle (detailed elsewhere on this site).

The 25-pounder gun was used by a plethora of operators during the war and after it - proving the British engineering quite sound as the system could stand up to the rigors of all manner of warfare. It saw much use in the post-war days where its reliability, range and firepower were still appreciated. Nations continued to field the weapon into the 1960s while others were retained for ceremonial services.

(Not all weapon types may be represented in the showcase above)
Dependent on Ammunition Carrier.