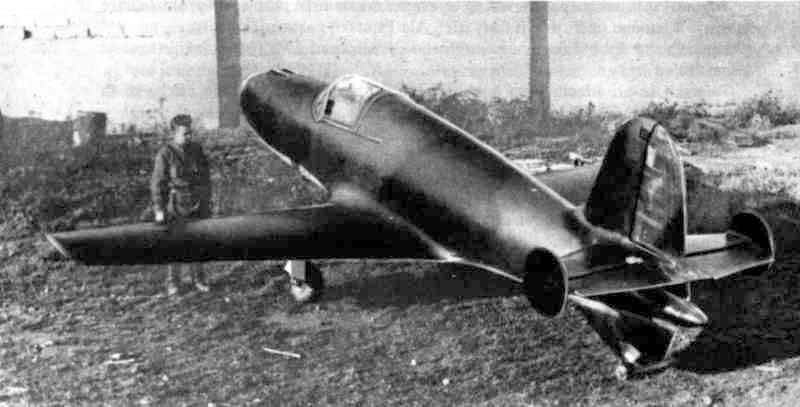 The Berezniak-Isayev BI-1 rocket-powered interceptor failed to impress and was abandoned after seven pre-production aircraft were delivered.

Rocket- and jet-powered fighter aircraft were not the sole developments of Germany, Britain, and the United States during World War 2 (1939-1945) for the Soviets were undertaking such work prior to the war as well. The Bereznyak-Isayev BI series of rocket-powered prototypes became the culmination of these early efforts - it was designed to a Soviet Air Force need for a rocket-propelled, short-ranged defense fighter whose development was hurriedly spurred on by the German invasion of the Soviet Union in June of 1941 to open the "East Front". The aircraft first flew on May 15th, 1942 and was actively tested into March of 1945 across nine completed examples. It served as a vital piece of the development process for future Soviet aircraft seen in the post-war years.

The aircraft received its name and designation from its engineer pairing of Alexander Yakovlevich Bereznyak/Berezniak (1912-1974) and Aleksei Mikhailovich Isayev/Isaev (1908-1971). In July of 1940, work was ordered on a high-speed aircraft benefitting from rocket or ramjet propulsion. The propulsion system evolved along a slow but steady line until sped up by the German invasion. The design team was given just 35 days to come up with a viable platform and work began in July of 1941, the workers forced to live at the development facility.
Advertisements

The engineers devised a streamlined aircraft form of rather compact proportions and armed with a proposed battery of 4 x 14.5mm heavy machine guns. Its fuselage would be streamlined and well-rounded for aerodynamic efficiency. The cockpit was fitted forward of amidships and the nose section covered over in a pointed nose assembly. The rocket propulsion system would sit in the aft section of the fuselage which forced a raised fuselage spine. As the propulsion system utilized a liquid propellant, no air intake was required to aspirate any engine. The tail rudder extended over and under the aft fuselage with the usual horizontal stabilizer mid-mounted. This tailplane also fitted a smaller set of vertical planes at its outboard ends. The mainplanes were affixed as straight monoplanes under and aft of the cockpit. The undercarriage was of the "tail-dragger" arrangement and retractable under the aircraft.

Prototype aircraft were born through the initial BI-1 and BI-2 airframes. Construction included both fabric and plywood as well as metal and the original armament of 4 x machine guns had now given way to 2 x 20mm ShVAK cannons for a heftier offensive punch. The aircraft sat a single crewmember under a lightly-framed canopy. As finalized, the aircraft featured a running length of 21 feet with a wingspan of 21 feet, 3 inches. Its height (when at rest) measured 6 feet, 9 inches. Empty weight was 2,115lbs with a Maximum Take-Off Weight of 3,710lbs. Maximum speed with the intended Dushkin D-1A-1100 liquid-fueled rocket motor peaked at 497mph. Range was limited to just 15 minutes of powered flight.

As progress on the Dushkin rocket motor was slow, prototype BI-1 entered into controlled glider testing to help prove the airframe sound and improve on some of its inherent weaknesses. During October 1941, the development facility was cleared out due to the advancing Germans and worked moved to the Ural mountains. With some more controlled testing on the ground, the aircraft finally went airborne during May 15th, 1942. BI-2 then took over the program and found itself the center of several successful flights. On March 21st, 1943, prototype BI-3 was destroyed, killing its pilot, during a low-level, full-throttle flight run. The cause of the crash was ruled as "Transonic velocity" which showcased the aerodynamic limitations of the airframe design as-was, marking that it would soon prove itself a technological dead end in the scope of the program. Prototypes BI-5, BI-6, BI-7, BI-8, and BI-9 followed into 1944 and the final forms were finished with Merkulov DM-4 ramjets which required the airframe to be towed into the air prior to launch. Focus then shifted to Isaev's RD-1 rocket engine which covered no more than two flights. A total of twelve flights involving the BI prototypes were recorded.

By this time, the BI has reached its technological apex and no production forms succeeded them. The Soviet Air Force found little interest in a high-speed fighter with just a 15 minute endurance window and the war progressed favorably into Germany at that point. Nevertheless, the BI series served well in influencing future Soviet rocket- and jet-powered mounts still to come. The BI program was then ended.

(Showcased performance specifications pertain to the base Berezniak-Isayev BI production variant. Compare this aircraft entry against any other in our database. View aircraft by powerplant type)
PROPOSED:
4 x 14.5mm heavy machine guns OR (later) 2 x 20mm ShVAK cannons in nose.