The Mitsubishi G3M medium bomber was produced in over 1,000 examples beginning in 1936.

Authored By: Dan Alex | Last Edited: 02/01/2020 | Content ©www.MilitaryFactory.com | The following text is exclusive to this site. 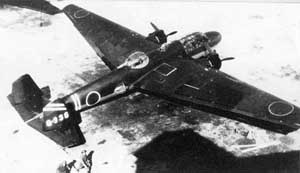 The Mitsubishi G3M "Rikko" (codenamed "Nell" by the Allies) was a frontline, twin-engine medium bomber utilized primarily by the Imperial Japanese Navy (IJN) during World War 2. She was fielded in many useful combat and non-combat roles during her operational tenure, these being centered on maritime sorties, patrol, VIP transport, conventional bombing, torpedo bombing, passenger transport (armed and unarmed) and training of aircrews and paratroopers alike. In Japanese service, the G3M served exclusively with the Imperial Japanese Navy Air Service as a land-based component and was utilized to deadly effect against American forces at Wake Island and the British battleships HMS Prince of Wales and HMS Repulse. Production was originally handled by Mitsubishi but later split to include the firms of Nakajima and Yokosuka.

Mitsubishi G3M Nell Origins
By 1935, the Imperial Japanese Navy had put forth a requirement for a twin-engine, land-based reconnaissance platform. Mitsubishi answered by delivering their promising Ka-15 prototype, the design credited to engineer Kiro Honjo. First flight was recorded in July of 1935 and the prototype met expectations, now being further realized as a long-range bomber platform by Japanese authorities. As such, Mitsubishi reworked portions of their prototype to deliver a revised form of which testing and trials occurred throughout 1936. Content with the results, the IJN accepted the bomber into inventory as the "Navy Type 96 Attack Bomber Model 11" - or, the Mitsubishi G3M1. Production was ordered in June of 1936 and operational units were delivered their new mounts later that year. Thirty-four of this initial production form - essentially preproduction service aircraft - were ultimately produced and fielded with Mitsubishi Kinsei 3 series radial engines of 910 horsepower each.

By 1937, a newer, more powerful form of the Kinsei had become available. Appropriately, Mitsubishi fitted these to their G3M airframe and produced the G3M2 production model designation. The G3M2 mark would go on to become the definitive production model of the G3M series. A further improved version, the G3M3 fitting Kinsei 51 radials of 1,300 horsepower each, was revealed beginning in 1941 with deliveries handled by the Nakajima firm.

Mitsubishi G3M Combat Service
As soon as the aircraft was made ready and operational, it was placed into combat actions for the IJN. G3M2 models were first utilized by the IJN Kanoya Kokutai group in August of 1937. These bombers were charged with destruction of targets in Hangchow and Kwangteh, China. After gaining ground against China, at least four squadrons of G3M2s were in service numbering some 130 aircraft in all. By the time of the Japanese surprise attack against the American port at Pearl Harbor, Hawaii, some 204 examples were in circulation despite their generally-regarded status as "obsolete".

G3M2s were further utilized in successful upcoming actions at Wake Island, the Philippines (from bases in Formosa) and the Marianas. G3M bombers, originating from bases in Vietnam, hit Singapore City on December 8th, 1941 resulting in thousands of enemy casualties including Britains. A combined group of G4M1 "Betty" and G3M2 "Nell" bombers were responsible for the sinking of the British battleships HMS Prince of Wales and HMS Repulse on December 10th, 1941, this occurring off of the Malayan coast. These Nells operated from forward bases in Indochina and netted the first-ever recorded sinking of warships exclusively through an air strike. Additionally, on December 25th, 1941, a G3M crew successfully engaged - and subsequently shot down - a large US Navy PBY Catalina flying boat in a dogfight of "heavies".

By 1943, the Nell has effectively run her course. The war progressed as such a pace that technology quickly outdid the impressive developments and performance stats originating in the mid-to-late 1930s. As such, surviving G3Ms were placed into second-line duties as transports for VIPs, crew trainers for bombing, pilot and navigation practice and as training platforms for Japanese paratroopers. She was officially retired in 1945 but served through to the end of the war - proving her design as nothing less than excellent.©MilitaryFactory.com
Advertisements

Mitsubishi G3M Nell Walk-Around
For the most part, the G3M Nell was highly conventional by World War 2 bomber standards. She sported mid-mounted monoplane wings ahead of amidships. These wings were straight along their leading edges and forward-swept along their trailing edges. The fuselage was cylindrical in shape, capped at the front by a solid or glazed rounded nose cone assembly and tapered at the rear to become the surface area of the horizontal stabilizers. The cockpit was set in a "stepped" fashion and utilized heavy glazing while still offering up generally superior visibility from the air and visual access to each engine. Engines were fitted into the trailing edge of each wing and powered a three-blade propeller, these propellers either variable- or fixed-pitch in nature. Direct aft of the cockpit stood a small glass dorsal blister that could hold a defensive machine gun position. Aft of this position was a larger observation/defensive position that normally managed a 20mm cannon emplacement. Aft of the wing trailing edges, along the fuselage sides, were glazed blister positions for additional observation ports and defensive gun positions. The design tapered off to a conventional empennage, sporting the requisite horizontal planes and a pair of vertical tail fins held inward of the stabilizer wing tips - the vertical fins essentially in line with the engine nacelles when viewed from a top-down angle. The undercarriage was fully retractable and traditional for an aircraft of this type - being of the "tail dragging" sort and made up of two main landing gear legs (set under each engine nacelle) and a diminutive tail wheel at the rear. By any regard, the Nell was a solidly designed bomber for her time.

Powerplant and Performance
While the G3M generally varied only in minor ways throughout her production tenure, one of her mainstay components became the Mitsubishi Kinsei series air-cooled, radial piston engine. The definitive production model, the G3M2 Model 21, fitted a pair of Mitsubishi Ha-45 Kinsei series radial piston engines that delivered up to 1,075 horsepower each. This supplied the Nell with a top speed of 233 miles per hour (cruise being 174 miles per hour), a service range of about 2,730 miles and a service ceiling of 30,200 feet. Rate-of-climb was listed at 1,180 feet per minute.

Armament
In keeping with bomber design tradition concerning the 1930s and 1940s, the Nell showcased a combination of offensive and defensive arms throughout her structure. On empty, the aircraft displaced at 10,923lbs but, when loaded for combat, the airframe could nearly double its weight to 17,600lbs. Defensive armament utilized the 7.7mm Type 92 general purpose machine in various positions. One machine gun was fitted in the cockpit while a pair were managed in side blister gun positions by two crew members. Ultimately, there was a single gun in a single retractable dorsal turret, in all, numbering four defensive gun positions. A single 20mm Type 99 cannon system was afforded to the rearward-set dorsal cockpit. The G3M could field a modest bombload of up to 1,764lbs held externally or a single torpedo (equivalent weight) to be used against shipping targets.

Mitsubishi G3M Variants
Beyond the Ka-15 designation for the prototypes (this eventually redesignated to G3M1a/c), the G3M existed in several production forms of note. The G3M1 Model 11 was a land-based bomber platform that saw its cabin area lengthened with a new canopy. Some of the thirty-four examples of this model produced also featured fixed-pitch propeller systems. The G3M1-L were G3M1 production models converted as armed or unarmed military transports and were fitted with Mitsubishi Kinsei 45 series engines of 1,075 horsepower.

The G3M Model 21 was the definitive Nell, fitting improved engines with more power as well as additional internal fuel for increased maximum ranges. A dorsal turret was also added for improved protection against enemy fighters. Production was such that it was split between Mitsubishi and Nakajima, each handling 343 and 412 deliveries respectively. The G3M2 Model 22 had one of her dorsal turrets and her ventral turret removed, this replaced now by a single dorsal turret system. Side blister beam defensive positions were added for improved defense and 238 examples were ultimately produced. The G3M3 Model 23 was given more power engines and saw an increase to her internal fuel stores, affecting operation ranges for the better. Production was handled solely by Nakajima.

Yokosuka produced the L3Y1 Model 11 and the L3Y2 Model 12. The former was a conversion model of the G3M1 armed transport with improvements, the latter being fitted based on the G3M2 production series but fitted with Mitsubishi Kinsei powerplants.

Production and Future
Ultimately, the G3M was produced in a total of 1,048 examples between Mitsubishi, Nakajima and Yokosuka. While used extensively in the early years of Japanese belligerence in the region, the G3M was eventually superseded by the more-capable G4M - the newer design fulfilling all of the desired roles of the G3M.

The Nell in Indonesian Service
Beyond the Empire of Japan, Indonesia became the only other operator of the G3M. In 1945, this being the final year of World War 2, the Indonesian military captured several Nells across Japanese airbases and placed them into operation as part of their burgeoning air force program. However, many of these were destroyed or fell out of use during the Indonesian National Revolution between 1945 and 1949 against the Netherlands.©MilitaryFactory.com
Note: The above text is EXCLUSIVE to the site www.MilitaryFactory.com. It is the product of many hours of research and work made possible with the help of contributors, veterans, insiders, and topic specialists. If you happen upon this text anywhere else on the internet or in print, please let us know at MilitaryFactory AT gmail DOT com so that we may take appropriate action against the offender / offending site and continue to protect this original work.
Advertisements

Status
RETIRED
Not in Service.
Crew
5 or 7

Imperial Japan; Indonesia
(OPERATORS list includes past, present, and future operators when applicable)
✓ Ground Attack (Bombing, Strafing)
Ability to conduct aerial bombing of ground targets by way of (but not limited to) guns, bombs, missiles, rockets, and the like. ✓ Special-Mission: Anti-Ship
Equipped to search, track, and engage enemy surface elements through visual acquisition, radar support, and onboard weaponry. ✓ Transport
General transport functionality to move supplies/cargo or personnel (including wounded and VIP) over range. ✓ VIP Service
Used in the Very-Important-Person (VIP) passenger transport role, typically with above-average amenities and luxuries as standard. ✓ Intelligence-Surveillance-Reconnaissance (ISR), Scout
Surveil ground targets / target areas to assess environmental threat levels, enemy strength, or enemy movement. ✓ Training (General)
Developed ability to be used as a dedicated trainer for student pilots (typically under the supervision of an instructor).

OPTIONAL:
Up to 1,764lbs of external ordnance. This can be replaced by a single torpedo for anti-shipping work. 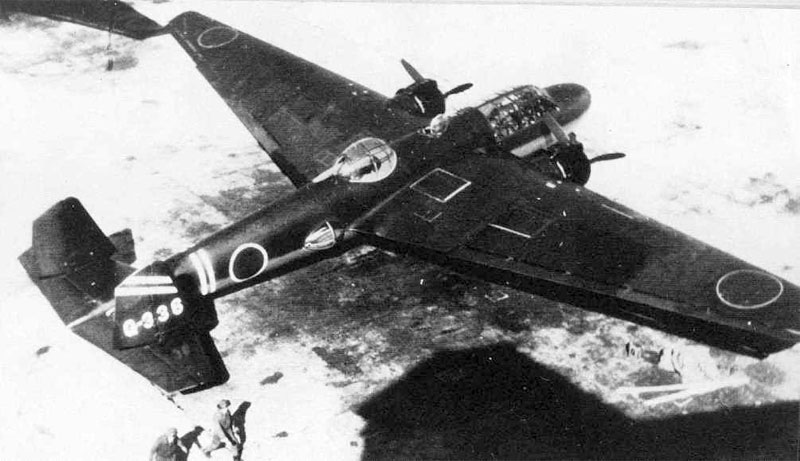 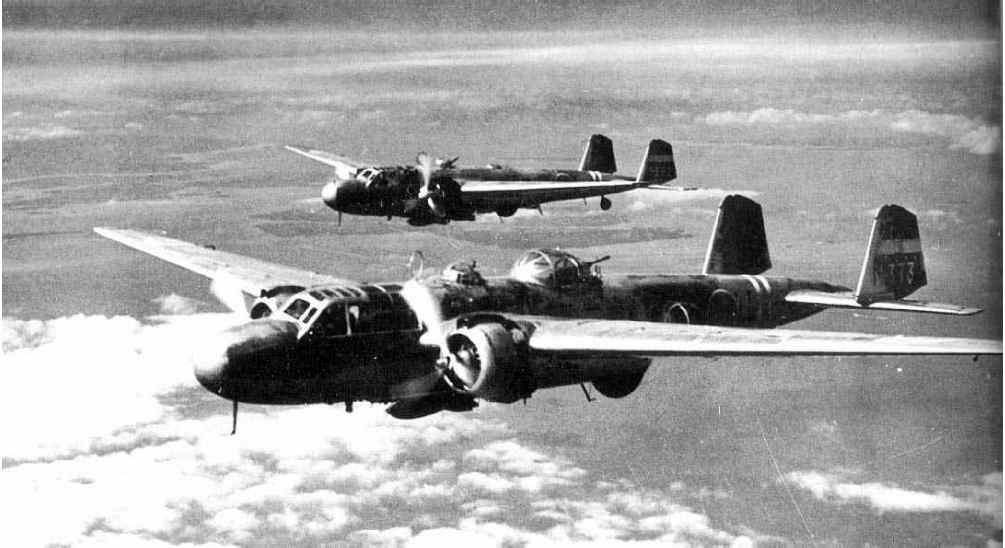 Front left side view of a Mitsubishi G3M bomber taking off
❮ ❯