The success of the Arado 234 and Messerschmitt 262 ended the pursuit of the Arado Ar TEW 16/43-19 multirole series.

Authored By: Staff Writer | Last Edited: 11/09/2017 | Content ©www.MilitaryFactory.com | The following text is exclusive to this site. 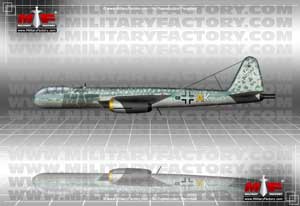 With development of the advanced twin-engine, jet-powered Ar 234 "Blitz" bomber coming along, the Arado firm turned its attention to a more advanced jet aircraft with a multi-role capability in mind. The TEW 16/43-19 would have been produced in five distinct versions, each serving a dedicated purpose but utilizing the same basic airframe to save on cost, and was composed of the "Schnellbomber" high-speed bomber, the "Zerstorer" destroyer, the "Nachtjager" night-fighter, the "Schlechtwetterjager" adverse weather fighter and the "Aufklarer" reconnaissance platform. Despite the promising nature of the TEW 16/43-19 study (at least on paper), the equally promising development and arrival of the Messerschmitt Me 262 jet-powered fighter and the Ar 234 bomber meant that the need for the multirole design was no longer there. As such, the TEW 16/43-19 was relegated to history as one of the many German "paper" aircraft on file.

Design of the TEW 16/43-19 was decidedly Arado, even borrowing much of its external look and layout from the Arado Ar 234 before it. The pressurized cockpit was situated at the extreme forward end of the slim cylindrical fuselage. There was a crew of two, seated back-to-back under a glazed canopy. Wings were mid-mounted monoplane assemblies with sweep back at greater angles along the leading edges. The trailing edges also featured sweep back but this to a much lesser degree. The wings carried with them a good deal of surface area and tapered somewhat sharply to clipped wing tips. Each wing was to mount a single 3,000lb thrust jet engine of unknown make and model in streamlined underwing nacelles. As a unit, the wings were situated just ahead of amidships, concentrating a good deal of weight for the aircraft in the forward portion of the design. The fuselage tapered off into a conical tip at the extreme aft of the layout and itself would have housed three large internal fuel tanks to feed the hungry jet engines. The empennage was conventional, sporting a rounded edge single vertical tail fin and two swept-back horizontal planes fitted at the base of the fin. Both the main wings and the tail wings featured some level of dihedral (upward angle) when viewed from the front or rear. The undercarriage was to be of a tricycle arrangement, making use of two large, single-wheeled main legs and a single-wheeled nose landing gear leg. All were completely retractable with the main legs folding forward into the wings and the nose leg folding rearwards under and beneath the cockpit floor.

Armament for the TEW 16/43-19 would have varied on the model type. The high-speed "Schnellbomber" was to be fitted with a pair of rear-firing, remotely-controlled MK 213 series cannons to protect the "six". Bomb load was to be 5,512lbs carried as external stores. In additional to conventional ordnance, the high-speed bomber version was also envisioned to carry the Fritz X series of wire-guided missiles.©MilitaryFactory.com
Advertisements

The night-fighting "Nachtjager" was to be fitted with a pair of forward-firing MK 108 30mm cannons as well as 3 x MK 213 cannons in a ventral pack. An additional 2 x MK 213 cannons would have been mounted along the fuselage sides while a battery of 2 x MK 108 30mm cannons would have been set to fire at an oblique angle in the upper fuselage. The rear would be protected by a pair of MK 213 cannons remotely-controlled. Because of its night operations nature, a third crewmember would accompany the crew, his position in the rear portion of the fuselage just aft of the three large internal fuel tanks. Radar would have been fitted into a specially-designed nose extension.

Dimensionally, the Arado Ar TEW 16/43-19 would have sported a wingspan up to 53 feet, 2inches with a surface area of 501.6 feet. The fuselage would have measured 59 feet, 1 inch in length. Height would have been approximately 9 feet, 10 inches. A maximum weight of 35,274lbs was envisioned for the craft.©MilitaryFactory.com
Note: The above text is EXCLUSIVE to the site www.MilitaryFactory.com. It is the product of many hours of research and work made possible with the help of contributors, veterans, insiders, and topic specialists. If you happen upon this text anywhere else on the internet or in print, please let us know at MilitaryFactory AT gmail DOT com so that we may take appropriate action against the offender / offending site and continue to protect this original work.
Advertisements 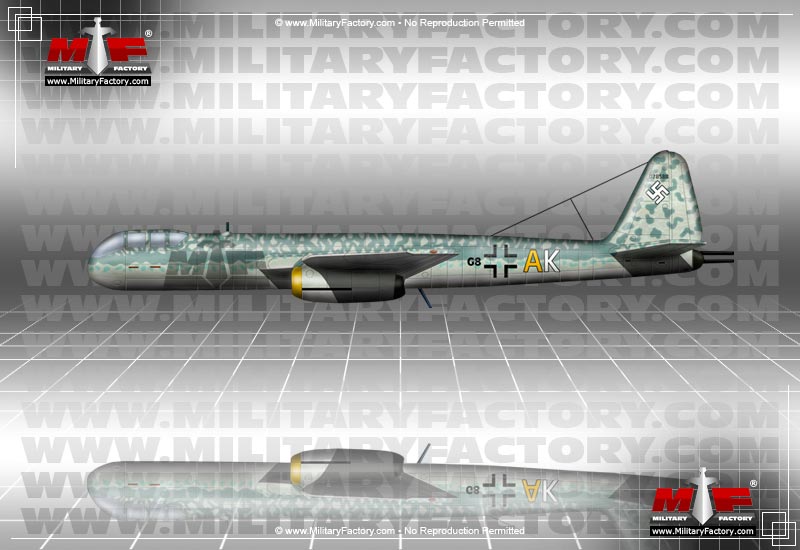