The Arado Ar TEW 16/43-15 design was a combination jet-and-rocket-powered fighter proposal for the German Luftwaffe during World War 2.

Authored By: Dan Alex | Last Edited: 11/09/2017 | Content ©www.MilitaryFactory.com | The following text is exclusive to this site. 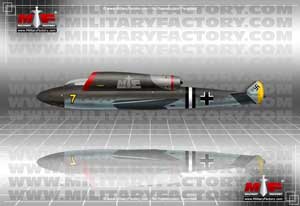 The Arado Ar TEW 16/43-15 concept was born out of an in-house research project studying the possibilities of jet-powered fighter aircraft. The design appeared as early as March of 1943 and became yet another example of the forward-thinking in aircraft technology as sponsored by the many German engineering firms of World War 2. The intent of the Ar TEW 16/43-15 design was to mate a jet engine with rocket-fueled power to complement all-out performance above 32,800 feet. The design never materialized passed the "paper" stage however.

Design was wholly Arado and made use of some distinct features. A pair of low-mounted, swept-back wings were fitted at the center of the tubular fuselage with slab sides. The wings sported some dihedral and featured curved tips. The single pilot would have sat in a pressurized cockpit fitted just aft of a short nose-cone assembly. Vision to the front quadrant from under the single-piece glass canopy would have been excellent. The fuselage tapered off at the rear to which sat a high-mounted "Tee" style tail system sporting two vertical fins. The horizontal tail surfaces were swept while the vertical fins were nearly triangular in shape. Perhaps the most notable design element of the TEW 16/43-15 was its positioning of the jet engine, this mounted along the top of the fuselage spine with the intake wrapped around and aft of the canopy. The engine compartment ran some distance behind amidships and exhausted between the twin vertical tail fins. Fuel for the two powerplants was dispersed about the internal fuselage, in positions both central and aft.

Armament was never overlooked on these types of aspiring Luftwaffe fighter designs and the TEW 16/43-15 did not disappoint. Weapons of choice would have been a pair of MG 151/15 15mm cannons or a pair of MG 151/20 20mm cannons. Additional armament could have been a single MK 103 30mm cannon or a pair of MK 108 30mm cannons. The armament was to be centralized along the fuselage sides forward of the wings.©MilitaryFactory.com
Advertisements

Performance specifications were, of course, estimated. Power could possibly have been derived from a Heinkel-brand He S 011 series jet engine of 2,866lbs thrust. Rocket propulsion was to be a Walter HWK 509A series bi-fuel rocket thruster. The fuel for the thruster consisted of the volatile C-Stoff and T-Stoff fuel combination. A top speed of 572 miles per hour was envisioned as was an optimistic ceiling of 61,600 feet with a range of 745 miles.

Like many of the potential Luftwaffe plans throughout the war however, the TEW 16/43-15 remained the stuff of German dreams. It was never followed up on nor was a prototype ever completed let alone test flown - leaving to the imagination of what impact (if any) this fighter aircraft might have had on the outcome of the war. Needless to say, it was a complex design that would have had to clear many-a-hurdle to see fruition and was perhaps left best on the engineer's drawing board and nothing more. The idea of the jet/rocket-powered fighter lived on for a time in the post-war years but the theory was soon ousted by the advent of afterburning jet-powered engines to achieve the desired results.©MilitaryFactory.com
Note: The above text is EXCLUSIVE to the site www.MilitaryFactory.com. It is the product of many hours of research and work made possible with the help of contributors, veterans, insiders, and topic specialists. If you happen upon this text anywhere else on the internet or in print, please let us know at MilitaryFactory AT gmail DOT com so that we may take appropriate action against the offender / offending site and continue to protect this original work.
Advertisements

(Showcased performance specifications pertain to the base Arado Ar TEW 16/43-15 production variant. Performance specifications showcased above are subject to environmental factors as well as aircraft configuration. Estimates are made when Real Data not available. Compare this aircraft entry against any other in our database or View aircraft by powerplant type)
PROPOSED:
2 x MG 151/15 15mm cannons OR 2 x MG 151/20 20mm cannons in fuselage sides.
1 x MK 103 30mm cannons OR 2 x MK 108 30mm cannons in fuselage sides. 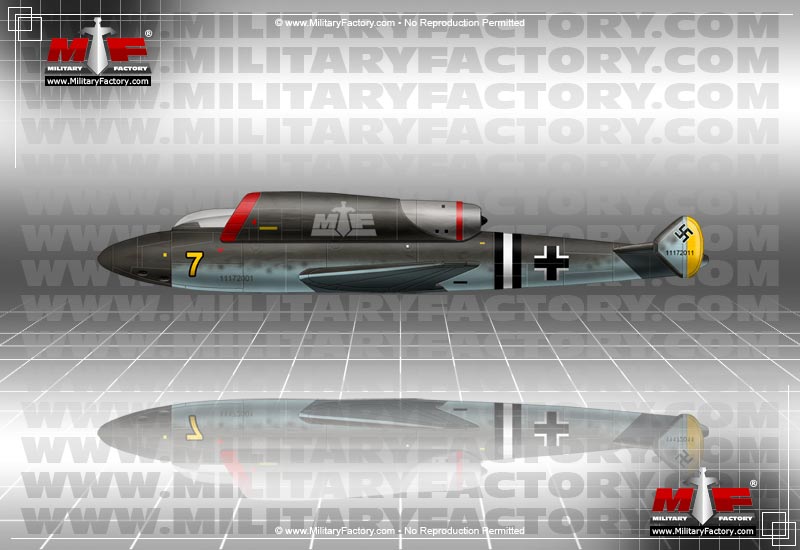