The F.E.2 series was a pivotal Allied performer during the Fokker Scourge and later went on to become a capable night bomber.

Authored By: Staff Writer | Last Edited: 07/17/2016 | Content ©www.MilitaryFactory.com | The following text is exclusive to this site. 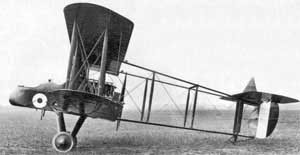 The F.E.2 series of aircraft were produced by the Royal Aircraft Factory and had their origins in the F.E.1, a 1910 design by the Farman Brothers of France. Geoffrey de Havilland joined the Royal Aircraft Factory and brought with him this design in the newer F.E.2 form. The F.E.2 series featured a "pusher" type engine layout and tandem seating of a pilot at the rear position and his observer/gunner in the forward cockpit. The type served from 1914 up through the end of the war, playing an instrumental role in turning back the tide of the Fokker Scourge of 1915-1916, and was later relegated to homeland defense and night bombing sorties by the end of its operational tenure as its design was made obsolete. Over 2,300 total F.E.2's were produced.

The first F.E.2 appeared in 1911 based in some part on the F.E.1 design with a further F.E.2 development coming in 1913 - the latter eventually lost to a fatal crash. The F.E.2a appeared shortly as a completely new aircraft and designed from the outset as a dedicated fighter platform. The system featured the pusher-type engine layout in which the engine output "pushed" the aircraft forward as opposed to the engine "pulling" the frame. This layout was brought about as a matter of necessity since technology to allow a machine gun to fire through a spinning propeller blade was still on the drawing boards for the Allies (the Germans having early success in solving the issue via Anthony Fokker's interrupter gear). Either the engine was mounted at the rear or the weapon would have to be positioned somewhere over or under the spinning propeller blades with the engine mounted at front. The former method was chosen, forcing the observer/gunner to be placed at the front of the fuselage with his machine gun and the pilot at the rear with the aircrafts main controls. To aid visibility for the pilot, his seating was stepped above his observer's position.

This provided obvious benefits and dangers. The gunner was provided an excellent view of the oncoming action. The pilot was also afforded good vision all around his aircraft due to his lofty position (the strut and wire framework of the aircraft no doubt assisted in this department some). Problems lay in the open-air nature of the layout. In particular, having the propeller exposed to anything that might fly out of either cockpit could prove fatal. Consequently, the spinning propeller blades provided some deflection against enemy bullets from the rear. Should a crash land be imminent, the crew would have to take into consideration the weight of the engine following behind them and the flammable fuel to go along with it. Pusher propellers, as history would eventually show us, have never lived up to the performance capabilities of their puller brethren either, setting up the F.E.2 series at a technological disadvantage from the start.
Advertisements

Principle armament for the observer was a single 7.7mm Lewis machine gun, placed on a trainable mount. With his great field of view and firing arc, the observer was capable of handling most any target ahead of the aircraft. Interestingly enough, a second Lewis machine gun was later added, this one facing to the rear and mounted on the surface of the top wing assembly, requiring the observer to stand in his cockpit to fire the weapon. In theory, this provided the F.E.2 some defense from rear-approaching attackers but in actuality this made for a very dangerous situation for the observer to be in considering any action taken by the pilot could result in the observer being thrown overboard.

The F.E.2a model appeared as a limited production batch, numbering some twelve examples. This was followed by the more capable F.E.2b which replaced the previous Green-brand engines with Beardmore types of 120 horsepower (later upped to 160 horsepower). The F.E.2b became the main production model and was followed by an F.E.2c and F.E.2d model. The former was an experimental platform tested as a night fighter/bomber with switched positions for pilot and observer unlike the F.E.2b layout. The latter was a more powerful type fitted with a Rolls-Royce Eagle engine with an impressive output of some 250 horsepower increasing performance and overall power somewhat. Defensive armament was also increased with additional forward-fixed machine guns operated by the pilot.

Overall, the F.E.2 series lead a long and distinguished career as both fighter and bomber. Though outclassed by later models on both sides, the aircraft still maintained an operational role for quite some time despite this. The F.E.2 proved to be a difference maker during the crucial months of the Fokker Scourge, fielded alongside Bristol Scouts and others. Her apparent limitations as a day-time performer eventually led to her being used successful as a night bomber and night fighter (against the slower-moving German threats like Zeppelins and bombers). The F.E.2 proved a noticeable adversary by war's end, being responsible for the downing of German ace Max Immelmann (though this was disputed by the Germans, accounting his loss to "friendly fire").
Advertisements

OPTIONAL:
Up to 517lbs of light external ordnance. 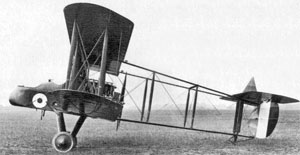