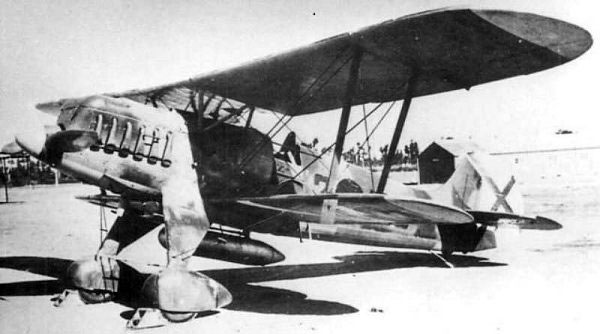 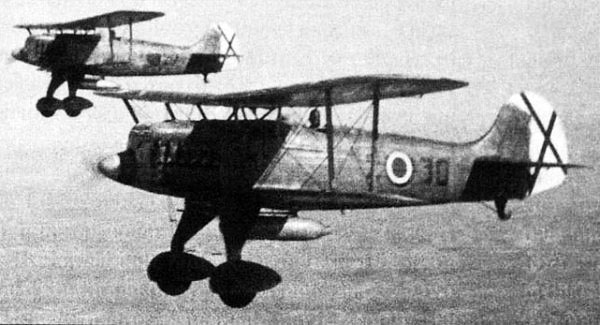 Heinkel He 51 on water with pontoon floats
❮ ❯

The Heinkel He 51 series was part of Germany's rebuilding program, providing priceless combat experience for Luftwaffe pilots in the Spanish Civil War.

The He 51 was a product of the German Heinkel firm and a design of the Gunter twins, Walter and Siegfried. The Gunters became part of the Heinkel firm in 1931 and made the He 49 their first product with the company. The He 49 was a biplane aircraft developed as a fighter, sporting a pair of machine guns, and developed into three major prototype forms. It was these prototype designs that eventually developed into the He 51a prototype and, ultimately, the He 51 production models.

The He 51a differed from the previous He 49 forms in that it was given a new tail fin, wings, undercarriage and radiator. The He 51 itself would become a successful German fighter in World War 2, becoming a serviceable floatplane derivative and light ground attack platform as well. Despite the limitations imposed on German war machine development following the close of World War 1, the He 51 was none-the-less pursued under the guise of it being an advanced trainer. In many ways, the He 51 was part of the "new-look" German military soon to be unleashed on an unsuspecting world.

The He 51 was given uneven-span biplane wings (also known as "sesquiplane") with the upper span longer (and situated forward) than the lower span. Each wing had a single bay with parallel struts angled forward (in profile) and outward with applicable bracing cables. The engine was positioned at the extreme forward of the contoured fuselage and consisted of a liquid-cooled inline engine powering a two-bladed propeller. The pilot sat directly behind and under the upper wing element in an open-air cockpit protected by a forward windscreen. The empennage was conventional with a rounded vertical tail fin and mid-mounted elevators. The undercarriage was fixed and featured two main landing gears faired over and a tail wheel at rear, also faired over. The seaplane version of the He 51 was very similar in design with the most notable exception being the large pontoon floats affixed in place of the landing gears. Armament consisted of 2 x MG 17 machine guns mounted over the engine, synchronized to fire through the revolving propeller blades, with 500 rounds reserved to a gun. For the light strike roles inherent in the C-models, up to six 22lb bombs could be carried.
Advertisements

The Heinkel He 51 was produced in a handful of variants but represented in only three major production models. The four prototypes represented the aircraft initially beginning with the He 49a featuring a short fuselage, the He 49b with a lengthened fuselage, the He 49c with a revised glycol-cooled engine and the He 51a with its revised vertical tail fin and wings, a new undercarriage and new radiator. The He 51a prototype led to the first nine pre-preproduction aircraft under the He 51A-0 designation. This was followed by the first production-rate examples in the 150 He 51A-1's.

The He 51B-0 appeared as another dozen pre-production examples that saw reinforcement of their structure. The production version became the He 51B-1 of which only another 12 were produced. The He 51B-2 was a floatplane variant to which 46 were produced in total. The He 51B-3 was a dedicated high-altitude version.

The He 51B-1 was powered by a single BMW VI series 7,3Z liquid-cooled V12 engine with an output of 750 horsepower. This allowed for a maximum speed of up to 205 miles per hour with a cruise speed of 174 miles per hour. Range was limited to 354 miles with a respectable service ceiling of 25,256 feet.

The He 51C-1 was the first dedicated light ground attack model. At least 79 of these were delivered to Spain to fight with the Legion Kondor (Germany's "Condor Legion") in Spain's civil war in favor of the Nationalist forces. The He 51C-2 was nothing more than an improved version of the He 51C-1. These fitted improved radio equipment. Twenty-one examples of this type were produced.

In all, some 700 examples represented the He 51 series in slightly varied forms. Operators included the German Luftwaffe, the Spanish State and Bulgaria. Bulgaria received twelve He 51's from Germany.

He 51's were first used in anger in the Spanish Civil War. In many ways, Germany used this battleground to field test a variety of items including aircraft, vehicles and tactics. Six He 51 systems were delivered to the battlefront on August 6, 1936, and quickly proved better systems then their biplane contemporaries. Spanish and German airmen both flew the aircraft in the conflict, the Germans under the Condor Legion banner.

As the war progressed and aircraft technology advanced, the He 51 was just as quickly taken out of the dogfighting fold. Instead, the system was utilized as a ground attack platform with good success, despite losses to more modern monoplane types. Many Spainish He 51's survived the conflict, and the ensuing World War, to be of use through the end of the 1940s. Its limited successes in the Spanish Civil War showcased the limitations of fighters relying on biplane wing arrangements over those with monoplane arrangements. The He 51 was nimble enough thanks to its slower speeds and available wing area but speed was once again at the forefront of dogfighting. Newer systems could simply outrun aircraft like the He 51. This naturally forced the He 51 our of favor against more modern implements though the aircraft did soldier on for the German Luftwaffe as a trainer in the early years of the war. As a front-line fighter, however, the type was dropped from service in 1938.

(Showcased performance specifications pertain to the Heinkel He 51A production variant. Compare this aircraft entry against any other in our database. View aircraft by powerplant type)
STANDARD:
2 x 7.92mm MG 17 machine guns in nose