The British Fox was built under the Fairey Aviation Company sister name in Belgium, Avions Fairey. 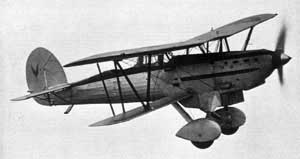 Avions Fairey was set up in Belgium as an offshoot of the Fairey Aviation Company of Britain. The production facility was initially created for the local production of the Fairey Firefly to these facilities were later used for production of the newer Fairey "Fox" light bomber biplane. Production models were delivered to the British Royal Air Force and adopted for service by the Belgium Air Force with total manufacture being 176 examples. First flight was on January 3rd, 1925 with official introduction following in June of 1926. Final forms were retired with the Swiss Air Force in 1945.

The Fox was an interwar design as characterized by its biplane wing arrangement, open-air cockpit, and the fixed, spatted main landing gear legs. However, such aircraft typically utilized more modern implements such as metal skinning and a wholly shrouded engine compartment. The aircraft seated two in tandem with the pilot in the forward cockpit and an observer/machine gunner in the rear cockpit. Standard armament consisted of 2 x 7.62mm FN-Browning fixed, forward-firing machine guns over the nose (synchronized to fire through the spinning propeller blades) and a single gun on a trainable mounting in the rear cockpit. The light bomber role was made possible by the carrying of up to 220lbs of externally-held ordnance.

The aircraft's overall configuration was typical of biplane aircraft - an upper and lower wing element was featured with struts and applicable support and control cabling where required. The fuselage was well-streamlined from nose to tail with the tail unit featuring a rounded vertical tail fin and low-set horizontal planes. Power was through a Hispano-Suiza 12Ybr liquid-cooled V-12 engine of 860 horsepower output. Maximum speed was 225 miles per hour with a range out to 635 miles and a service ceiling of 32,800 feet.

By all accounts, the design was sound and proved excellent though production numbers did not reflect this. Avions Fairey Foxes were in play during the valiant - yet hopeless - defense of Belgium during the German invasion of 1940. The aircraft were wholly outclassed by their German rivals in every respect, marking the Fox as an obsolete design heading into a new generation of fighting machines.

Several variants emerged - the "Fox I" was used by the RAF and outfitted with American Curtiss D-12 450 horsepower engines with 25 aircraft produced. The Fox IA followed as eleven examples (eight converted) with Rolls-Royce Kestrel engines of 490 horsepower. The Fox IIM incorporated evermore metal in its construction and retained the Kestrel engine (480 horsepower) though only lived on in prototype form. The Belgian models begam with the "Fox II" and featured supercharged Kestrel engines. A dozen were produced by Fairey in Britain and were followed by 31 examples from Avions Fairey in Belgium. The Fox III marked a British demonstrator model and a Belgian dual-control trainer variant. The Fox IIIS were trainer models. Fox IIIC were Belgian reconnaissance bomber forms with Kestrel engines. These were more modern in their use of enclosed cockpits. 48 were produced in Belgium. Fox IV covered several limited models - a British demonstrator form, a Fox II aircraft with Hispano-Suiza 12Ybrs engine, and a British floatplane form. Fox VIR was a reconnaissance mount with Hispano-Suiza 12Ydrs engine of 860 horsepower to which Belgium collected 24 aircraft and two were delivered to Switzerland. The Fox VIC marked a two-seat fighter form of which 52 were produced. The Fox VII was a fighter model based on the VIR though with only one crew. The Fox VIII was the culmination of the line and featured a three-bladed propeller unit and four machine guns - the guns mounted under the wings as opposed to the upper forward fuselage. 12 examples were delivered.

The Peruvian Air Force joined the RAF, Belgians, and Swiss as operators of the Fox series.
Advertisements

Belgium; Peru; Switzerland; United Kingdom
(OPERATORS list includes past, present, and future operators when applicable)
✓ Air-to-Air Combat, Fighter
General ability to actively engage other aircraft of similar form and function, typically through guns, missiles, and/or aerial rockets. ✓ Ground Attack (Bombing, Strafing)
Ability to conduct aerial bombing of ground targets by way of (but not limited to) guns, bombs, missiles, rockets, and the like.

OPTIONAL:
Up to 220lb of external stores (drop bombs). 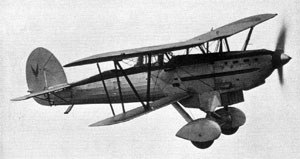