The Nieuport 27 was a continuation of the Nieuport 17 fighter line of 1916. 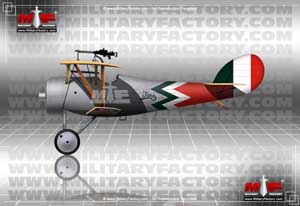 The Nieuport Nie.27 (or simply Nieuport 27) was designed by Gustave Delage and became an advanced trainer and frontline fighter, serving with units of the Aeronautique Militaire of France, the Royal Flying Corps of Britain and the Corpo Aeronatico Militaire of Italy during World War 1. Service for the type began in 1917 with production handled by both Nieuport of France and Nieuport-Macchi of Italy. Despite it being categorized as a fighter, the aircraft was generally utilized as an advanced trainer for most of her war-time career. The design was, in essence, a continuation of the successful Nieuport 17 of 1916 attempting to build upon the successes of the former.

Design of the Nie.27 ran in line with the smattering of offerings found throughout World War 1. As a biplane fighter, the Nie-27 made use of a staggered and equal-span wing assembly with the upper surface area noticeably larger than that of the lower. The lower wings were connected to the lower fuselage just below and aft of the engine mount. The upper wing sat some distance above the engine mount and was braced to the upper forward fuselage via four main struts. The wings themselves were set between the engine and the cockpit when viewed in the profile and featured V-struts in a single-bay arrangement. Nie-27s were the last Nieuport fighters to feature this type of wing strut. The engine was fitted to the extreme forward portion of the fuselage complete with a curved cowling and powered a two-blade propeller. The pilot sat in an open-air cockpit with reasonably good views. The empennage was conventional and sported a single vertical tail fin with applicable horizontal planes, all with rounded edges. The undercarriage was fixed and featured two main landing gears and a simple skid at the base of the tail.

When armed, Nie.27s were fielded with Vickers (French and Italian Nie.27s) or Lewis machine guns (British Nie.27s). If a Vickers was used, a single machine gun was fitted to the forward fuselage over the engine compartment just forward of the pilot's windscreen and synchronized, via an interrupter gear, to fire through the spinning propeller blades. If a Lewis-type machine gun was utilized, the weapon was fitted to a special Foster Mount arranged atop the upper wing assembly. It was not uncommon to two machine guns on an Nie.27, though at the expense of some performance. Trainer Nie.27 mounts were unarmed.

General performance for the Nie.27 resulted in a maximum speed of 116 miles per hour with a service ceiling of approximately 18,200 feet. A rate-of-climb to 16,400 feet could be achieved in 22 minutes with an operational range of about 150 miles. Power was initially from a Le Rhone Rotary engine of 130 horsepower (as found on the Nie.24bis series) but this was oft-replaced in the trainer role by lower-rated 110- or 120-horsepower versions.

Most all Nieuport fighters still utilizing the "V-strut" wing supports were given up for good during the spring fighting of 1918, eventually replaced by more able-bodied types - such was the short-lived service life of the Nieu.27.

Operators of the aircraft included France, Italy, Japan, Poland, Russia (later overtaken by the new powered governing the now-Soviet Union), the United Kingdom, the United States and Uruguay. For the United Kingdom, the Nie.27 served with Nos. 1, 14, 17, 29, 40, 60, 67, 111, and 113 Squadrons of the Royal Flying Corps. Poland operation of the aircraft resulted in only a single example being procured. The United States fielded the aircraft as a training mount through the American Expeditionary Force as well as the later United States Army Air Service (1918).©MilitaryFactory.com
Note: The above text is EXCLUSIVE to the site www.MilitaryFactory.com. It is the product of many hours of research and work made possible with the help of contributors, veterans, insiders, and topic specialists. If you happen upon this text anywhere else on the internet or in print, please let us know at MilitaryFactory AT gmail DOT com so that we may take appropriate action against the offender / offending site and continue to protect this original work.
Advertisements

(Showcased performance specifications pertain to the base Nieuport 27 production variant. Compare this aircraft entry against any other in our database or View aircraft by powerplant type)
STANDARD:
1 x 7.7mm Vickers machine gun in fixed, forward-firing mounting on fuselage OR 1 x 7.7mm Lewis machine gun in fixed, forward firing position on Foster mounting over upper wing assembly (sometimes installed along with fuselage 7.7mm Vickers).

Nie.17 - Airframe on which the Nieuport 27 is developed from.
Nie.21 - Regarded as most successful of the Type 17 off-shoots; fitted with 80hp powerplant; enlarged ailerons.
Nie.23 - Fitted with either 80hp or 120hp engine; based off of the Type 17 but heavier weight.
Nie.24 - Training variant; featured circular-section fuselage construction; aerodynamic refinements throughout; fixed vertical fin assembly.
Nie.27 - Featured redesigned tailplane assembly; redesigned tail skid. 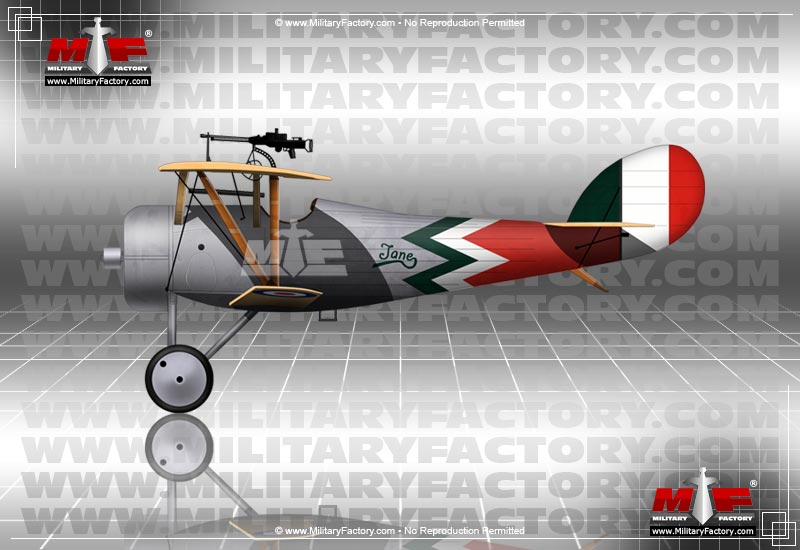