The Henschel Hs 123 was quite successful during its limited service run, eventually being supplanted by the highly-effective Junkers Ju 87 Stuka series of monoplane dive bombers. 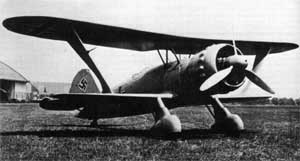 The Henschel-produced Hs 123 aircraft became the last operational biplane adopted by the German Luftwaffe heading into World War 2 (1939-1945). Born from a 1933 German requirement for a dive-bomber, several Henschel Hs 123 test aircraft would fly by 1935 (two would be lost to dive accidents in the process). Five such aircraft were then "tested" by the Condor Legion of Germany during the Spanish Civil War (1936-1939) which produced refinements in the design. the biplane aircraft would eventually see combat during the German invasions of Poland, Belgium, France, and the Soviet Union under the banner of the Luftwaffe.

Like many of the single-seat military aircraft appearing in the early-to-middle part of the 1930s, the Henschel Hs 123 showcased some of the traditional design characteristics of World War 1 aircraft - fixed undercarriage, biplane wing arrangement, open-air cockpit. The series was initially fielded through the pre-production Hs 123A-0 designation and these were used by the Luftwaffe to evaluate the design. Initial production models became the Hs 123A-1 and these arrived with 2 x forward-fixed 7.92mm machine guns while being driven by a BMW 132Dc radial piston engine. The dive bomber also was given provision for an under-fuselage external fuel tank or conventional drop bomb and four additional hardpoints were had to each wing element (two per wing).

Performance-wise, the aircraft could manage a top speed of 211 miles per hour and range out to 533 miles with the drop tank installed. Its service ceiling reached 29,530 feet and rate-of-climb was 2,950 feet per minute.

The success of the Hs 123 with the Condor Legion in Spain eventually offered up some minor modifications to the base design. The proposed Hs 123B mark was canceled in favor of the developing Junkers Ju 87 "Stuka" dive-bomber detailed elsewhere on this site. With the Hs 123 making its appearance in 1936, the impressive Stuka followed in 1937 and snuffed out any remaining future the Hs 123 may have had in Luftwaffe service.

Additional combat actions were had by the Chinese who purchased a stock of twelve biplanes and used these against Japanese naval targets during the Second Sino-Japanese War.

The series saw action up until 1944 before being fully withdrawn from frontline roles but continued into 1945 playing important secondary roles, particularly over the Eastern Front. Amazingly, the Spanish Air Force stock soldiered on into 1953.
Advertisements

China; Nazi Germany; Spain
(OPERATORS list includes past, present, and future operators when applicable)
✓ Ground Attack (Bombing, Strafing)
Ability to conduct aerial bombing of ground targets by way of (but not limited to) guns, bombs, missiles, rockets, and the like. ✓ Close-Air Support (CAS)
Developed to operate in close proximity to active ground elements by way of a broad array of air-to-ground ordnance and munitions options.

(Showcased performance specifications pertain to the Henschel Hs 123a-1 production variant. Compare this aircraft entry against any other in our database or View aircraft by powerplant type)
STANDARD:
2 x 7.92mm machine guns in fixed, forward-firing mounts synchronized to fire through the spinning propeller blades.

Hs 123A-1 - Initial Production Model
Hs 123B - Prototype Models intended as successor to Hs 123A series, though cancelled with the arrival of the effective Ju 87 "Stuka"; fitted with BMW 132K 960hp engine; Two such prototypes produced; second with 4 x 7.92mm machine guns and an all-enclosed cockpit.
Hs 123C - Variant armed with 20mm cannon. 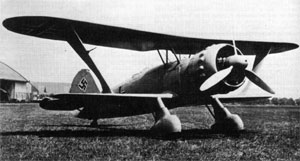