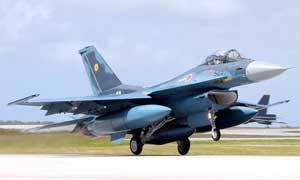 The Mitsubishi F-2 fighter was initially intended as a wholly indigenous Japanese multirole fighter design to replace the aging fleet of Mitsubishi F-1s. With design work already underway during the 1980s under the FS-X program designation, the United States government moved in with enough political and economic pressure to force Japan into abandoning its local fighter plans in favor of continued support for American-originated military equipment. The Japan indigenous initiative, therefore, ended in 1987 and the program focused on procurement of the Lockheed F-16C "Fighting Falcon" multirole platform (Block 40). The aircraft would be modified to suit Japanese military requirements headed by Mitsubishi Heavy Industries with Lockheed remaining the primary US contributor. General Electric would provide the necessary turbofan engines. The program produced four modified F-16Cs in the early going and these served as prototypes. First flight was recorded on October 7th, 1995 while, in December, the aircraft was formally designated "F-2". Adopted in 2000, the F-2 continues to serve the Japan Air Self-Defense Force (JASDF) in the air defense, ground attack and maritime strike roles. With ongoing disputes against China and general volatility in the region, the F-2 plays an increasingly important role in Japanese air operations for the island nation (January 2014).

Despite its obvious appearance to the America fighter, the Mitsubishi F-2 incorporates enough new features and local technology to consider it a highly modified Japanese variant of the F-16. The F-2, at its core, is a single-seat, single-engine mount powered by the successful General Electric GE F100-series turbofan with reheat (afterburner). The fuselage, though mimicking the American F-16C in general contour and shape, has evolved to become some 25% larger than the original with more advanced composites introduced to its construction. The fuselage has been lengthened and a three-piece framed cockpit selected over the large -area glass version on the F-16. The tail unit has been given an increase in surface area while the intake is of a larger dimension. Due to restrictions imposed by the American State Department on export of fly-by-wire control software, Japanese engineers have developed a local solution. The nose assembly, too, houses a Mitsubishi-brand Active Electronically Scanned Array (AESA) radar while the cockpit retains Head-Up Display (HUD), color Multi-Function Displays (MFDs) and Hands-on-Throttle-and-Stick (HOTAS) control arrangement.

Standard armament of the F-2 includes an internal 20mm JM61A1 cannon for close-in combat. Optional armament is all externally held across five hardpoints (one underfuselage and four underwing) with ordnance totaling 17,830lbs. The armament suite includes a mix of air-to-air and air-to-surface weaponry. As in the American F-16C, the F-2's wingtips are reserved for AIM-9 Sidewinder short-range air-to-air missiles (or the local Mitsubishi AAM-3 missile). Other air-to-air options include the American AIM-7 Sparrow or local Mitsubishi AAM-4 missile. For ground attack and maritime strike, the F-2 is cleared to carry ASM-1 and ASM-2 anti-ship missiles, anti-radiation missiles, precision-guided munitions, and conventional drop ordnance. The fuselage and inboard underwing hardpoints are further plumbed for external fuel tanks which improve operational ranges of the fleet.

Originally, the Japanese government commissioned for 140 aircraft to emerge from the FS-X program. However, budgetary constraints soon limited this to less than 100 and this has since become 94 production-quality airframes along with the four early prototypes. The aircraft then saw extensive delays with tail assemblies manufactured by Lockheed Martin and developmental problems arising with the new composite wings. This led to the series not formally fielded until 2000 (1999 was the target year) by which time they were quick to replace the outgoing F-1s in the Japanese inventory. Production spanned from 1995 into 2011 and has since completed. Early-batch examples cost the Japanese Defence Agency $100 million per unit which proved problematic in Japanese politics of the period. Indeed, it would have been cheaper to purchase existing F-16 airframes instead.

The Mitsubishi F-2 is roughly comparable to the Chengdu J-10 "Vigorous Dragon" which would become its primary adversary in an all out confrontation with China.©MilitaryFactory.com
Note: The above text is EXCLUSIVE to the site www.MilitaryFactory.com. It is the product of many hours of research and work made possible with the help of contributors, veterans, insiders, and topic specialists. If you happen upon this text anywhere else on the internet or in print, please let us know at MilitaryFactory AT gmail DOT com so that we may take appropriate action against the offender / offending site and continue to protect this original work.
Advertisements

(Not all ordnance types may be represented in the showcase above)
Hardpoint Mountings: 5 (including wingtip mounts) 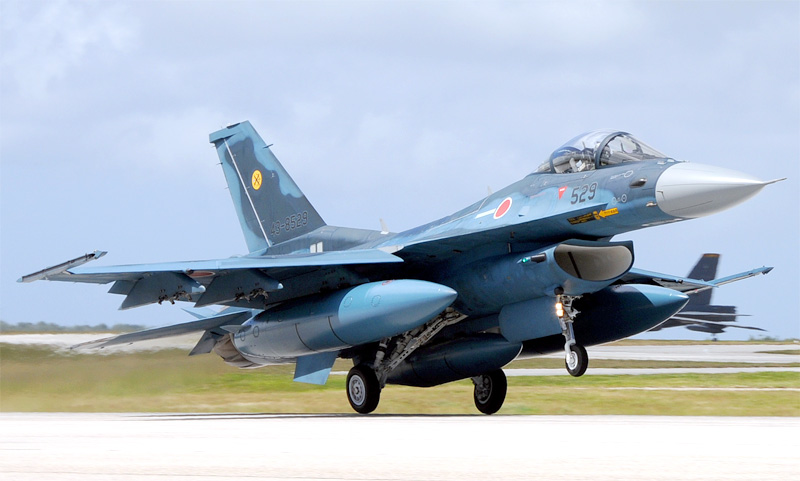 Image courtesy of the United States Department of Defense.
2 / 5 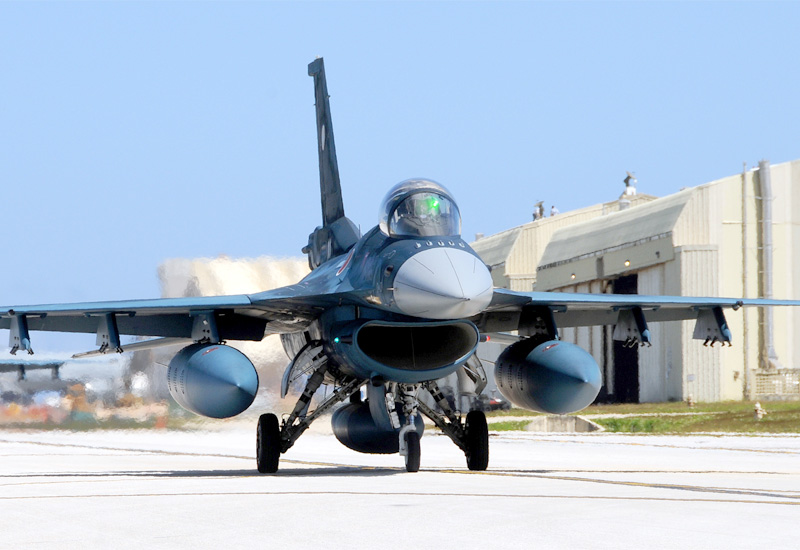 Image courtesy of the United States Department of Defense.
3 / 5 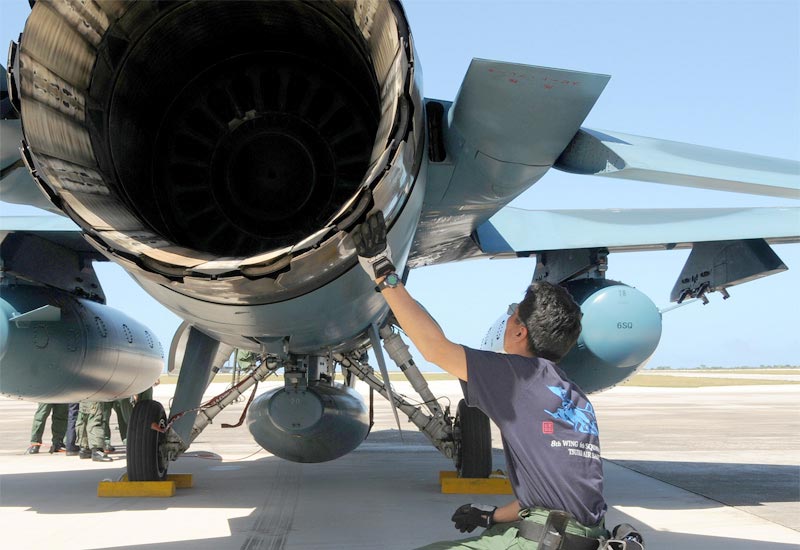 Image courtesy of the United States Department of Defense.
4 / 5 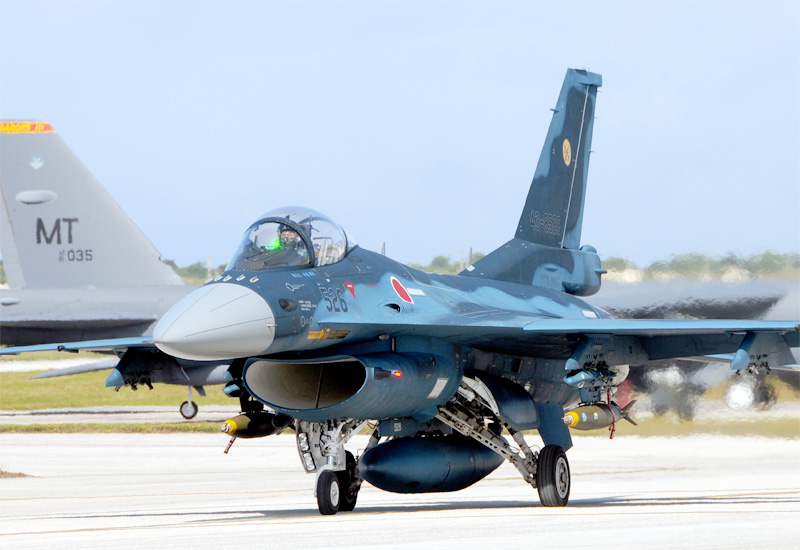 Image courtesy of the United States Department of Defense.
5 / 5