The ungainly Armstrong Whitley was nonetheless a workhorse performer for the Royal Air force during the span of 1937 to 1942.

Authored By: Staff Writer | Last Edited: 03/19/2019 | Content ©www.MilitaryFactory.com | The following text is exclusive to this site. 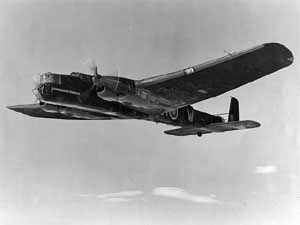 Continuing in the tradition of ugly yet robust and reliable heavy bombers, the British Armstrong Whitworth Whitley was the heavy bomber of choice during the early war years and up through 1942. The massive unappealing design offered the Royal Air Force a versatile heavy hitter to damage the internal workings of the German war machine. Though obsolete by the war's mid-years, the Whitley would never the less fulfill the projected role it was designed for and provide the RAF with a much-needed offensive punch.

The Whitley began as a derivative of the A.W.23 transport/bomber design, with the first prototype Whitley flying in 1936. Operational models would follow by 1937 in the form of the first two marks - Mk I and Mk II - split between an initial order of 80 aircraft (34 and 46 respectively). Minor differences distinguished the two but more prominent was the use of varying powerplants - Tiger IX radial engines in the Mk I and Tiger VIII radial engines in the Mk II. The Mk I would nearly be removed from service in its entirety by the time aggression had broken out over Europe. The Mk III would appear shortly after the initial batch, introducing a ventral gun position that was retractable. The Mk IV would come along with differing radial powerplants of the Rolls-Royce brand. A subvariant of the Mk IV would appear with a newly-configured powered tail turret housing quad 7.7mm machine guns. The definitive bomber variant of the Whitley series would have to wait until the appearance of the Mk V model, to which the system would take on the brunt of high-level deep-strike bombing missions in enemy-held territory.

The Armstrong Whitworth Whitley design was a basic twin engine aircraft with a heavy bomber classification. One of the most identifiable features of the series lay in the interesting angled-down format of the nose and cockpit section, which in itself contained a very obvious protruding "chin" fixture. Crew accommodations amounted to five personnel positioned in various parts of the aircraft, manning systems or defensive weaponry. Standard armament of the Mk V model consisted of a single 7.7mm machine gun in a nose gunner position complimented by a 4 x 7.7mm machine gun array in a powered-turret assembly at the tail of the plane. The addition of this Nash & Thompson product offered up the removal of a retractable ventral gun position seen in earlier models. Internal bombload was limited to 7,000lbs of varying ordnance.

Whitley's, though becoming obviously outperformed and vulnerable to ever-improving enemy attack at day or night, plodded along as required in a frontline operational capacity up until early to mid 1942 - though production continue up until 1943. In the end, the Whitley would be replaced by the next generation of British and American-made bombers, designed to take on more in the way of long-range heavy strike and designed with better defensive capabilities in mind. Nevertheless, the Armstrong Whitworth Whitley would go down as a capable performer.
Advertisements

United Kingdom
(OPERATORS list includes past, present, and future operators when applicable)
✓ Ground Attack (Bombing, Strafing)
Ability to conduct aerial bombing of ground targets by way of (but not limited to) guns, bombs, missiles, rockets, and the like.

OPTIONAL:
Up to 7,000 lb of bombs held internally. 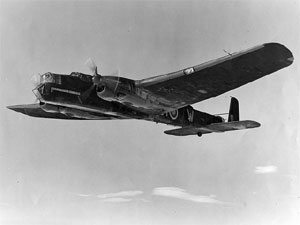