The doomed Fairchild T-46 trainer was the last effort put out by the Fairchild Republic concern - the USAF forced to go down another path.

Authored By: Staff Writer | Last Edited: 10/14/2021 | Content ©www.MilitaryFactory.com | The following text is exclusive to this site. 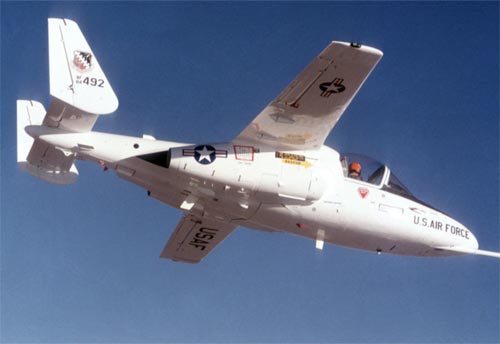 The Fairchild T-46, the last aircraft offering to come from the storied company, was part of a failed 1980s United States Air Force (USAF) effort to find a successor to an aging line of Cessna T-37 "Tweet" primary jet trainer aircraft. By this time, the straight-winged T-37 had been flying since 1957 (its series introduction) and some 1,269 were ultimately made for a variety of global operators - used in training and close-support/light strike combat roles. The T-46 was born from the service's new "Next Generation Trainer" (NGT) program forged in 1981 and flew for the first time in 1985 but was canceled as soon as 1988 with just three airframes built. The "Joint Primary Aircraft Training System" (JPATS) was subsequently jointly established by the USAF and United States Navy and this fruitful venture resulted in the Beech-Pilatus "Texan II" trainer, based in the excellent Swiss PC-9 development.

The Fairchild concern proved their design sound by partnering with Ames Industries to construct a 62% scale technology demonstrator of their trainer - this work resulting in the "Model 73 NGT" flyer. Testing would be handled from the Rutan Aircraft Factory over Mojave, California. USAF authorities liked what they saw in the Fairchild proposal and named the design the winning bid on July 2nd, 1982. An order for two flyable prototypes then followed to be succeeded by fifty-four production-quality airframes in an initial batch (650 total trainers in all were being sought by the service, making the T-46 design quite the lucrative investment for Fairchild).

The end-result was a flat, stubby-looking aircraft which seated its crew of two side-by-side (as in the T-37). This produced a wider-than-normal fuselage as the turbofan engine housings straddled the fuselage, adding addition girth to the design. The empennage was relatively short and capped by a rather unconventional twin-finned tailplane arrangement set about individual horizontal planes joined to the tail stem. The mainplanes were positioned over the fuselage (shoulder-mounted) and were straight in their general shape. A retractable, wheeled undercarriage allowed for ground-running.

A first-flight was had on October 15th, 1985 but, by this time, the program's development costs were ballooning to the point that sustainability was put into question (the design itself was actually presented few issues in testing). The effort was partially ended around 1986 and more or less fully ended in the 1987 budget review. Formal cancellation followed in 1988 with just three aircraft to show for the effort - the move also doomed Fairchild as an airplane maker: its storied Farmingdale (New York) facility shut down - the same facility that birthed the famous P-47 "Thunderbolt" of the World War 2 period. The company's last great contribution became the Fairchild Republic A-10 "Thunderbolt II" Close-Air Support (CAS) platform revealed a decade earlier in 1977.

All of the three surviving airframes amazingly went on to survive the Test Of Time: s/n 84-0492 is held at the Air Force Flight Test Center Museum (Edwards AFB) and 84-0493 resides at the National Museum of the United States Air Force (Dayton, Ohio). 85-1596 can be found at the Pima Air Museum in Arizona. The Model 37 demonstrator is housed at the Cradle of Aviation Museum in New York.

As completed, the aircraft was given an overall length of 29.5 feet, a wingspan of 38.7 feet, and a height of 9.11 feet. Empty weight reached 5,725lb while the Maximum Take-Off Weight (MTOW) was rated to 6,962lb. Power was from 2 x Garrett F109-GA-100 turbofan engines developing 1,330lb of thrust each. This powered the aircraft to speeds of 457 miles-per-hour and cruising up to 383 mph. Range was out to 1,370 miles while its service ceiling was 46,500 feet.©MilitaryFactory.com
Note: The above text is EXCLUSIVE to the site www.MilitaryFactory.com. It is the product of many hours of research and work made possible with the help of contributors, veterans, insiders, and topic specialists. If you happen upon this text anywhere else on the internet or in print, please let us know at MilitaryFactory AT gmail DOT com so that we may take appropriate action against the offender / offending site and continue to protect this original work.
Advertisements

United States (trialed, cancelled)
(OPERATORS list includes past, present, and future operators when applicable)
✓ Ground Attack (Bombing, Strafing)
Ability to conduct aerial bombing of ground targets by way of (but not limited to) guns, bombs, missiles, rockets, and the like. ✓ Close-Air Support (CAS)
Developed to operate in close proximity to active ground elements by way of a broad array of air-to-ground ordnance and munitions options. ✓ X-Plane (Developmental, Prototype, Technology Demonstrator)
Aircraft developed for the role of prototyping, technology demonstration, or research / data collection. ✓ Training (General)
Developed ability to be used as a dedicated trainer for student pilots (typically under the supervision of an instructor). ✓- Training (Advanced)
Dedicated advanced training platform for student pilots having graduated from basic flight training.


(Not all ordnance types may be represented in the showcase above)
T-46 - Base Project Designation; three aircraft completed as well as a subscale technology demonstrator. 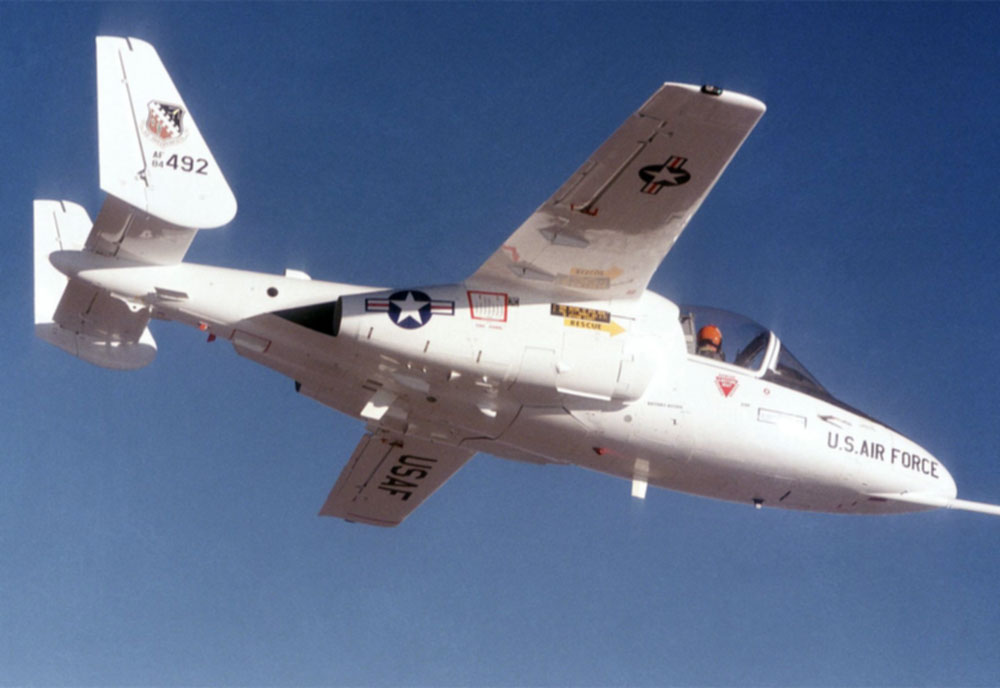