Based in the earlier I-15 and I-15bis, the I-153 was intended as an evolutionary step towards perfection - it succeeded only partially.

Authored By: Staff Writer | Last Edited: 05/11/2021 | Content ©www.MilitaryFactory.com | The following text is exclusive to this site. 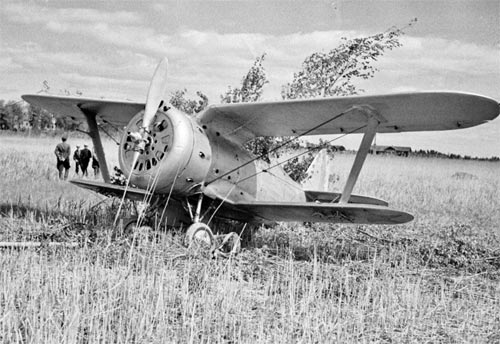 The Polikarpov aero-concern was in operation since the 1920s and offered up various biplane and monoplane developments leading to its participation in World War 2 (1939-1945). While ultimately absorbed into the competing Lavochkin bureau, the company ultimately delivered its famous "I-16" barrel-shaped speedy monoplane fighter in 1933 and this type went on to see service in the aerial conflict against the Axis that followed. Its predecessor was the "I-15" (Chaika) biplaneof 1933 and an evolved form of this fighter, the "I-153", emerged in 1937 (its internal company designation was "I-15ter").

The I-153 was a further study into improving the strong inherent qualities of the I-15 platform - whose dual-wing nature aided in enhanced maneuverability making it a nimble fighter in close-in action. Soviet experience in the Spanish Civil War (1936-1939) against Italian biplane types showed the monoplane-centric I-16 design was not up to the task of a turning fight - as such, Soviet authorities still championed investment in biplane designs for the foreseeable future.

The I-15bis variant was used as a starting point and measures were taken to extract as much performance out of the platform as possible. This began with the removal of the oversized fixed, spatted undercarriage and this arrangement being replaced by a inward-retracting wheeled design (with tailwheel) which was manually actuated by the pilot from the cockpit. Unlike the main legs in the arrangement, the tailwheel was not retractable but its movement was linked to that of the rudder for ground-running actions. The upper wing assembly, featuring simple dihedral in the original) was reworked to better mimic the "gull" shaping of the original I-15 offering.

The revised airframe was mated to the twin-supercharged Shvetsov M-62 9-cylinder, air-cooled radial piston engine (first-run in 1937). Developed from the preceding M-25 model, some 40,630 of these would ultimately be built over its service life and lead to the ASh-82 development thereafter. The output rating of the M-62 was between 850 horsepower and 1,000 horsepower and this would be used to drive a variable-pitch, two-bladed propeller unit at the nose.

The aircraft's construction involved a mix of wood and metal that included aerodynamic metal skinning. beyond this, its general design and arrangement were very conventional for the period and consistent with 1930s fighter developments elsewhere.

The original armament of 4 x 7.62mm PV-1 series machine guns was replaced by an arrangement of 4 x 7.62mm ShKAS machine guns in an attempt to improve first-hit chances. The ShKAS was introduced in 1933 and offered an increased rate-of-fire from its gas-operated, rotary feed action. The units were belt-fed in the usual way and aimed through iron sights in the cockpit. Up to 2,600 rounds of 7.62x54mm ammunition could be carried in the I-153 design. In addition to this, the aircraft was drawn up with a rocket-firing capability, able to showcase 8 x 82mm RS-82 series aerial rockets for ground-attack sorties.©MilitaryFactory.com
Advertisements

Delays in receiving the intended Shvetsov engine meant that the prototype went into the air for the first time in August 1938 and this specimen carried the M-25V air-cooled radial of 750 horsepower. Despite setbacks in general design and performance, development on the fighter continued into 1939 and serial production was well-underway at the start of World War 2 which was began in September of that year and continued into 1941 by which point the limitations of the I-153's design were all but apparent to engineers, pilots, and warplanners alike. As such, quantitative production eventually ceased as better options became available but this only after 3,437 total units had left factories.

In action, the I-153 (with M-62 engine driving the two-bladed variable-pitch propeller unit) could manage a maximum speed of 275 miles-per-hour and cruise near 185 mph. Range was out to just under 300 miles while the rated service ceiling reached 35,100 feet. Rate-of-climb was a useful 3,000 feet-per-minute. Dimensions included a running length of 20.2 feet, a wingspan of 32.9 feet, and a height of 9.1 feet. Empty weight reached 3,200lb against a Maximum Take-Off Weight (MTOW) of 4,655lb.

Initial combat actions involving I-153 fighters were at the Battle of Khalkin Gol as Soviet forces tangled with the Empire of Japan on Mongolian soil. The I-153 held its own against even the most modern Japanese types thanks to strong inherent maneuverability - though key limitations became engine life and lack of armoring at critical components. Beyond this, the I-153 could prove itself deadly to its own pilots due to its quirky operating characteristics. Various attempts by Polikarpov engineers and further development of the base model resulted in little adopted enhancements to the line. The I-153P went on to add cannon armament while the I-153Sh/USh added a drop bomb capability; the I-153UD was proposed with an economical hybrid fabric-over-wood construction but was not taken into service; the I-153V-TKGK was a high-altitude model but only 26 were realized and so on.

Before its ultimate end, the I-153 was showcased by the air powers of China (Chinese Nationalist Air Force), Finland (21 examples obtained through capture of Soviet specimens or through allied Germany), and the German Luftwaffe itself - these captured from the Soviets in the fighting across the East Front.©MilitaryFactory.com
Note: The above text is EXCLUSIVE to the site www.MilitaryFactory.com. It is the product of many hours of research and work made possible with the help of contributors, veterans, insiders, and topic specialists. If you happen upon this text anywhere else on the internet or in print, please let us know at MilitaryFactory AT gmail DOT com so that we may take appropriate action against the offender / offending site and continue to protect this original work.
Advertisements

SYNCHRONIZED / INTERRUPTOR GEAR Automatic weapons are synchronized to fire through the spinning propeller blades via special mechanical gear arrangement.
MULTI-WINGED Addition of more mainplanes to enhance inherent agility, providing a tactical edge in tight engagements.
HIGH-ALTITUDE PERFORMANCE Can reach and operate at higher altitudes than average aircraft of its time.
BAILOUT PROCESS Manual process of allowing its pilot and / or crew to exit in the event of an airborne emergency.
RETRACTABLE UNDERCARRIAGE Features retracting / retractable undercarriage to preserve aerodynamic efficiency.

(Showcased performance specifications pertain to the I-153 (M-62) production variant. Performance specifications showcased above are subject to environmental factors as well as aircraft configuration. Estimates are made when Real Data not available. Compare this aircraft entry against any other in our database or View aircraft by powerplant type)
STANDARD (Fixed, Forward-Firing):
4 x 7.62mm ShKAS machine guns (2,600 x 7.62mm ammunition afforded).

External fuel tanks added to at least 50 I-153 examples for the Soviet Navy service. 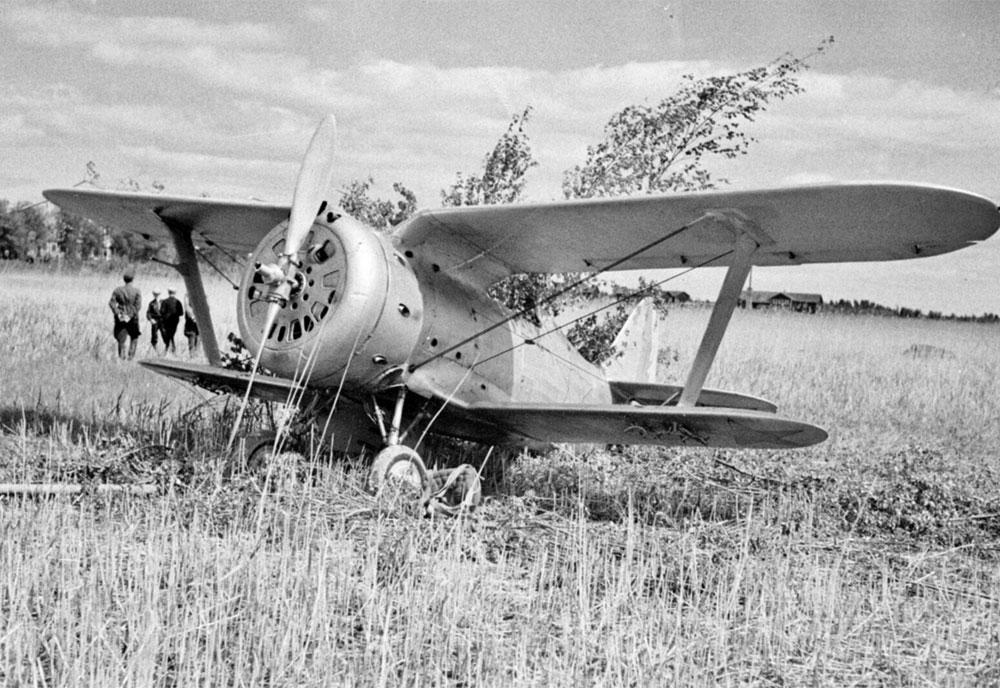 Image from the Public Domain; Soviet example captured by Finland.