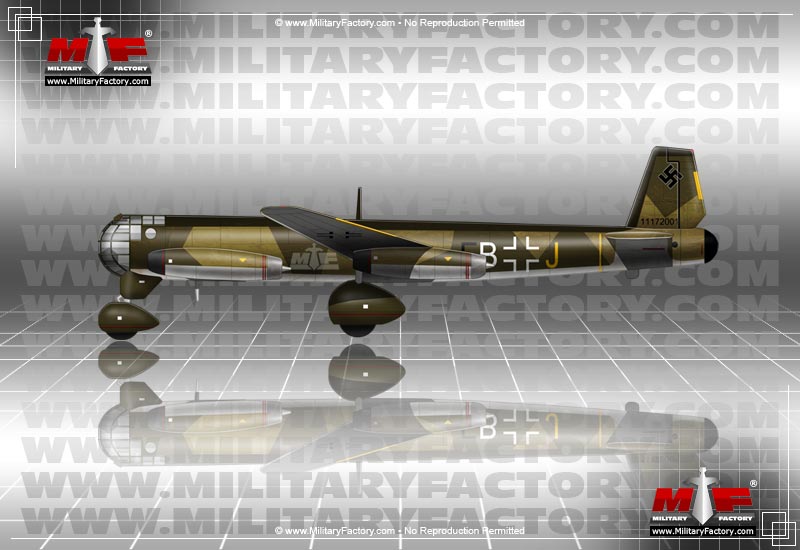 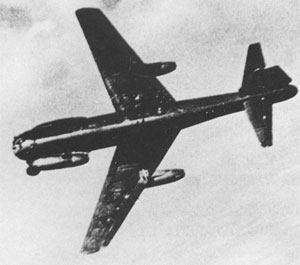 The Junkers Ju 287 was one of the more unique green-lighted German jet-powered aircraft projects to appear during World War 2.

Authored By: Staff Writer | Last Edited: 08/24/2018 | Content ©www.MilitaryFactory.com | The following text is exclusive to this site.
The Junkers Ju 287 certainly proved one of the most unique of the approved late-war, jet-powered designs for the German nation - now fighting a war on multiple fronts. The aircraft was intended as a high-speed heavy bomber which strayed away from previous conventional German thinking of the time which leaned towards light-to-medium-weight bomber projects - though a focus on fast bombers still remained at this point. Indeed, the German Luftwaffe fielded a limited collection of four-engined bombers during the war and this proved a strategic and tactical limitation throughout 1944 and into 1945.

Hans Wocke worked for Junkers and, in 1943, proposed a swept-forward wing concept for a fast jet bomber capable of outrunning any known enemy air defenses - including interceptors and ground-based cannon networks. The use of a forward-swept-wing, Wocke argued, would promote improved high-speed qualities and improve on low-speed handling when compared to straight-wing, jet-powered designs being regularly put forth. Design of the Ju 287 was headed by Ernst Zindel.

The new Junkers product was conceived in one working prototype and, to expedite its development, borrowed whole components from existing aircraft. The nosewheel was from an American Consolidated B-24 "Liberator" heavy bomber while the main wheels emerged from a Junkers Ju 352 "Herkules" transport. The Junkers Ju 388 "Stortebeker" heavy fighter made up a large portion of the empennage while the fuselage was taken from the Heinkel He 177 "Grief" heavy bomber.

With Flugkapitan Siegfried Holzbauer at the controls, initial prototype V1 went airborne for the first time on August 16th, 1944. Power was provided through 4 x Junkers Jumo 004B-1 turbojet engines - one under each wing and one to either side of the forward fuselage. This had to be augmented by 4 x Walter 109-501 rocket pods added to each jet installation for the required lifting-off thrust. The rocket pods were then jettisoned after their fuel had been spent.

The V1 would enjoy some developmental success during its short time aloft, completing as many as seventeen flights. Reported values included a maximum speed of 350 miles per hour with a cruising speed of 320 miles per hour, range out to 975 miles and a service ceiling of 30,850 feet. Rate-of-climb measured 1,900 feet per minute. The aircraft exhibited an empty weight of 27,560lb and 44,100lb when fully-laden. Dimensions included a wingspan of 66 feet, a fuselage length of 60 feet and a height of 15 feet, 5 inches. Due to operating altitudes and speeds, the Ju 287 would have utilized a pressurized crew cabin (for two) and ejection seats.

Proposed armament was to be up to 8,800lb of internally-held ordnance and an unknown defensive-minded cannon arrangement in a rear-facing, remote-controlled barbette.

Despite the promising aspects of the Ju 287, the program was slowed and interest in the high-speed jet bomber fell with the German Air Ministry (RLM). It was not until the desperation of March 1945 that the RLM knew what it had and made a move to order serial production of the Ju 287. In time, a V2 and V3 prototype were added to the fold, the V2 envisioned with 6 x Junkers Jumo 004B-1 turbojet engines. However, the war was quickly over by May 1945 and these two had only entered early construction before being taken over by advancing Soviet forces.

The Ju 287 program continued, to an extent, in the Soviet Union during the immediate post-war years, furthered into 1947 as the GOZ-1 "OKB-1 EF 131", this based on the proposed V3 prototype.

PROPOSED OPTIONAL:
Up to 8,800 lb of conventional drop bombs held in an internal bay.

Values are derrived from a variety of categories related to the design, overall function, and historical influence of this aircraft in aviation history.
Overall Rating
The overall rating takes into account over 60 individual factors related to this aircraft entry.
36
Rating is out of a possible 100 points.
Relative Maximum Speed
Hi: 400mph
Lo: 200mph
This entry's maximum listed speed (347mph).