The Messerschmitt P.1101-99 of World War 2 was to feature of crew of two and four total jet engines for the bomber-interception role.

Authored By: Staff Writer | Last Edited: 09/28/2019 | Content ©www.MilitaryFactory.com | The following text is exclusive to this site. 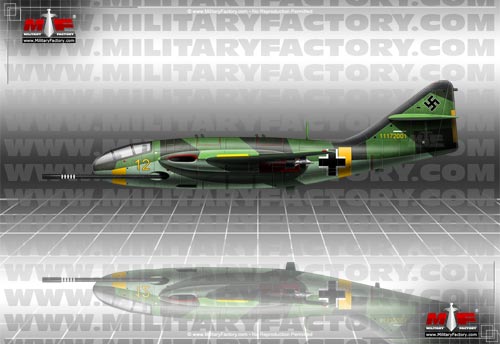 By the middle of 1944, it was clear to the Germans that the Allied day-night bombing campaign was exacting its toll on morale, infrastructure, and war-making facilities. As such, multiple measures were drawn up by authorities to help stem the tide of defeat from the air and this led to a bevy of jet- and rocket-powered interceptors and "bomber destroyers" (or "Zerstorers") intended to meet the threat head-on. One entry into the subject became the "P.1101/99" offered by the storied concern of Messerschmitt (makers of the classic Me 109 piston-driven fighter, Me 163 "Komet" rocket-powered interceptor, and Me 262 "Schwalbe" jet-powered fighter). This proposed aircraft fell under the blanket "P.1101" series of jet-powered aircraft of which the P.1101 itself (detailed elsewhere on this site) saw considerably more work done before the end of the war in 1945.

The P.1101/99 was credited to Messerschmitt engineer Hans Hornung and was anticipated to reach Initial Operating Capability (IOC) sometime in 1948 (should the war have gone on that long).

Using all available aerodynamic data, Messerschmitt engineers penciled out a rather unique and finely crafted, all-metal heavy aircraft complete with a heavily-glazed cockpit (for excellent vision out-of-the-cockpit), swept-back wing mainplanes (for high-speed flight), and a four engine layout (for exceptional performance). The cockpit would feature a crew of two, the men staggered in their side-by-side seats located at the extreme nose of the aircraft. The mainplanes were mid-mounted along the fuselage sides with their roots finely contoured to the fuselage in a slimming blended-body design. Sweep-back was apparent at all of the wing surfaces (leading and trailing edges) and moreso at the mainplanes which tapered to near-points at their tips. The tailplanes were swept as well and arranged in a traditional cruciform pattern around a single fin and mid-mounted horizontal planes. A fully-retractable wheeled undercarriage would allow for the necessary ground-running actions.

The four engine layout was to be arranged around the Heinkel-Hirth HeS 011 turbojet series, each unit rated for 2,860lb of thrust giving the P.1101/99 exceptional time-to-altitude and interception performance. Proposed speeds were to have this bomber destroyer reaching nearly 600 miles-per-hour (comparatively the American Boeing B-17 flew at speeds no faster than 300mph).

Internally, the aircraft would house its powerplants near midships, two engines to a fuselage side. The engines were aspirated by slim oval intakes found at each wing leading edge and exhausted at the aft-end of the wing roots, well-ahead of the tail unit. Fuel would be housed in tanks buried within the fuselage and armament involved an all-cannon battery of mixed of caliber, installed in such a way as to give the crewmen several distinct options when attacking American and British bombers.

The primary weapon was the be the 75mm BK automatic cannon which was nothing more than an aerial version of the famous (and proven) PaK 40 anti-tank gun used by the German Army throughout the ground campaign. This gun would be housed in the lower left side of the nose section and could have a devastating effect on bombers unfortunate enough to be found in its crosshairs. To further (and balance) frontal firepower, a single 55mm MK112 system was added to the starboard side wing root giving the P.1101/99 a potent one-two punch when approaching targets.

One of the more interesting weapon installations to be had in German wartime aircraft was the obliquely-angled cannon pairing in which two automatic guns of relatively large caliber were fitted in such a way so as to fire at an upward angle against the more vulnerable belly of a bomber. The P.1101/99 was drawn up with four such guns in two separate oblique installations, one forward and the other aft, along the dorsal fuselage spine. This then would allow the P.1101/99 crew to simply slide in under the enemy bomber and unleash a hellish burst of cannon fire with a good chance of bringing the aircraft down through a short burst.

As impressive as all this was on paper, the design was inherently too complex for wartime Germany and many resources would have been tied up to its years-long development phase. As war fortunes continued to turn against Germany throughout the remainder of 1944 and into the early-mid part of 1945, optimistic "paper airplane" designs like the P.1101/99 fell more and more into history as the ultimate defeat of the Reich soon arrived in April 1945 - officially bringing about an end to the war in Europe the following month. Nothing more than design work was had on this Luftwaffe wartime aircraft project.©MilitaryFactory.com
Note: The above text is EXCLUSIVE to the site www.MilitaryFactory.com. It is the product of many hours of research and work made possible with the help of contributors, veterans, insiders, and topic specialists. If you happen upon this text anywhere else on the internet or in print, please let us know at MilitaryFactory AT gmail DOT com so that we may take appropriate action against the offender / offending site and continue to protect this original work.
Advertisements 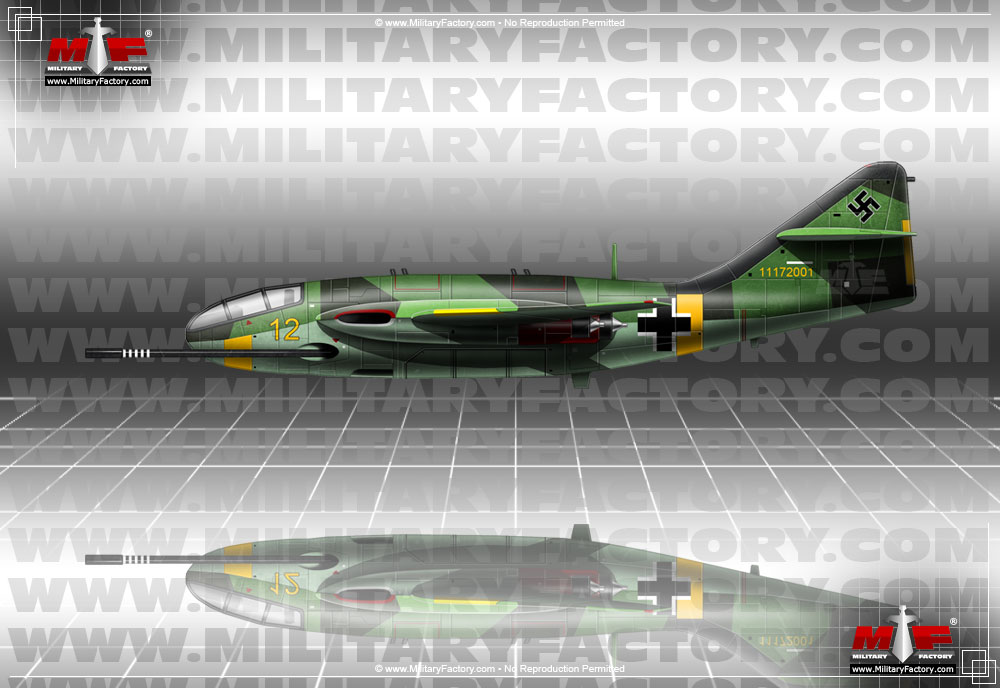