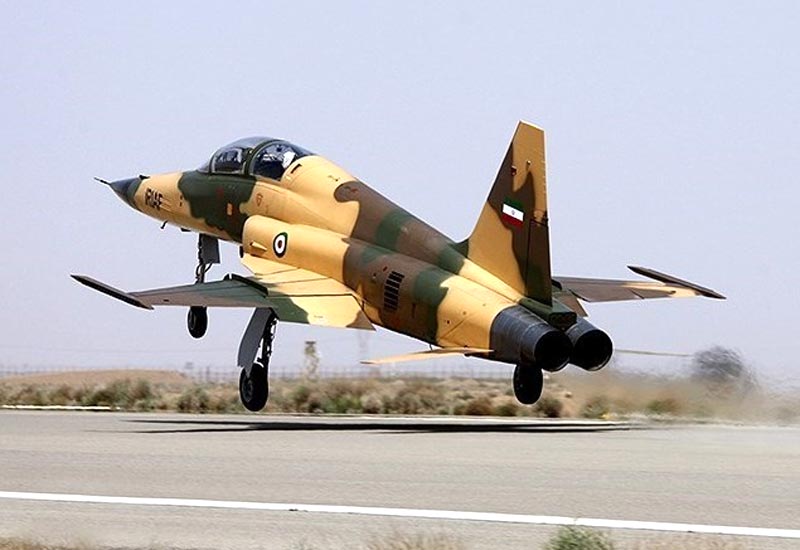 The HESA Kowsar is yet-another Iranian development of the American F-5 Tiger fighter - serial production is set to begin before the end of 2018.

Authored By: Staff Writer | Last Edited: 05/21/2019 | Content ©www.MilitaryFactory.com | The following text is exclusive to this site.
The HESA Kowsar (translating to "Thunderbolt") is a twin-seat, twin-engine light fighter developed by local Iranian aero-industry (namely the Iran Aircraft Manufacturing Industrial Company. The illegally-copied design is based in the 1950s-era American Northrop F-5 "Tiger/Freedom Fighter" platform (detailed elsewhere on this site) with capabilities in both air-to-air and air-to-ground sorties (more limited in the latter). Iranian state-run television boasts this aircraft to be of a 100% indigenous effort sporting a multirole radar fit and advanced avionics. A first-flight was recorded in August of 2018.

The aircraft certainly, and rather obviously carries the form and function of the F-5 through-and-through, from its long nose section to its low-mounted, small-surface-area wing mainplanes. The cockpit seats two in tandem under separate, rearward-hinged canopies (the tandem cockpit configuration is used in the American T-38 "Talon" advanced jet trainer built from the F-5 family). Straddling the sides of the fuselage are small semi-circular intakes used to aspirate the twin engine configuration within. The fuselage tapers slightly towards the aft-end of the aircraft to which two separate exhaust nozzles are featured just under the single vertical tail fin. Like the wing mainplanes, the horizontal tailplanes are low-mounted on the design. The mainplanes sport flaps, a swept-back leading edge and a straight trailing edge. Wingtip rail launchers are noted for the carrying of short-ranged Air-to-Air Missiles (AAMs). A tricycle undercarriage is used for ground-running. Of note is the arrestor hook for this land-based aircraft has been retained - this is typically a component used in aircraft carrier-based platforms.

It is assumed the aircraft has the F-5 arrangement of five hardpoints (two under each wing and a centerline spot) for the carrying of AAMs, Air-to-Surface Missiles (ASMs), rocket pods, gun pods, and jettisonable fuel tanks.

Beyond its obvious combat value, the Kowsar is can also be used as an advanced jet trainer featuring the student in the front cockpit and the instructor in the rear - perhaps maintaining full-combat capability. Ejection seats are found at both cockpit positions.

There is not much to suggest that the Kowsar is a "war-winning" combat platform by any regard. It is rooted in a 1950s Cold War-era design philosophy that, though proven over years of service, has seen its best days behind it - particularly in a world where the 5th Generation Fighter is picking up steam through designs such as the Lockheed F-22 "Raptor", the Lockheed F-35 "Lighting II", and the Sukhoi Su-57. The triumph here would be the success of Iranian aero-industry in taking an existing, proven design and re-engineering it for local purposes but little else. Iranian authorities have detailed it as a "deterrence" based in lessons learned from the 1980s conflict with neighboring Iraq.

As it stands, the Kowsar design is wholly unproven (war would be the ultimate testing ground) and there have been outrageous claims by Iranian authorities and state-run television in the past, leaving many observers in the West to doubt many of the proposed capabilities of any one development originating from this gulf power.

August 2018 - The Kowsar fighter was official inaugurated by Iranian officials.

November 2018 - State-run television has reported that the Kowsar lightweight fighter was set to begin serial production for the Islamic Republic of Iran Air Force.

Iran (planned)
(OPERATORS list includes past, present, and future operators when applicable)
✓ Air-to-Air Combat, Fighter
General ability to actively engage other aircraft of similar form and function, typically through guns, missiles, and/or aerial rockets. ✓ Ground Attack (Bombing, Strafing)
Ability to conduct aerial bombing of ground targets by way of (but not limited to) guns, bombs, missiles, rockets, and the like. ✓ Close-Air Support (CAS)
Developed to operate in close proximity to active ground elements by way of a broad array of air-to-ground ordnance and munitions options. ✓ X-Plane (Developmental, Prototype, Technology Demonstrator)
Aircraft developed for the role of prototyping, technology demonstration, or research / data collection.

(Showcased performance specifications pertain to the base HESA Kowsar (Thunderbolt) production variant. Compare this aircraft entry against any other in our database. View aircraft by powerplant type)
ASSUMED:
2 x 20mm Revolver cannons in nose.

(Not all ordnance types may be represented in the showcase above)
Hardpoint Mountings: 7 (including wingtips).